After the UK referendum 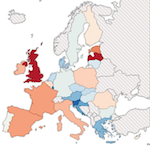 After the UK referendum

A map showing how knowledgeable Europeans are about the EU

Amongst all Europeans, the British are the least informed when it comes to the European Union. Did that have any influence on the way they voted on 23 June?

In the wake of the 23 June EU referendum in the United Kingdom it appeared that there was a widespread lack of information – or no information at all – on key facts about the European Union among British voters.

Some leaders of the Leave side took advantage of this and managed to campaign using, among other methods, false arguments and utter lies, supported by a wide range of national newspapers that “have offered their readers an endless stream of biased, misleading and downright fallacious stories about Brussels”, as The New York Times recently wrote. According to the “NYT”,

British newspapers’ portrayal of the European Union in the lead-up to the referendum on June 23 has likewise been negative. The Financial Times and the Guardian have backed the Remain campaign, but they have relatively small circulations and preach largely to the converted. The Times has been evenhanded, though it finally declared on June 18 that it favored staying in the European Union. But the biggest broadsheet (The Telegraph), the biggest midmarket paper (The Daily Mail) and the biggest tabloid (*The Sun*) have thrown themselves shamelessly behind Brexit.

So what about the pundits? Although, according to BuzzFeed, Remainers trusted them far more than Brexiteers, experts – whether they were economists or scientists went almost unheard, and were rebuffed by Leave campaigners, who played on voters’ fear and anger.

If you add that the British government provided virtually no information on the European Union before the referendum, the outcome should have been expected. Just as it should not have been surprising noting that hours after having voted to leave it, Britons were “frantically googling ‘what is the EU’.” And it’s even less of a surprise if you look at the figures about how informed UK citizens are about the EU: they are at the very bottom of the ranking, as a recent Eurobarometer, where we obtained this data from, shows. Respondents were asked to say whether each of the following statements was true or false: “The EU currently consists of 28 Member States”; “The Members of the European Parliament are directly elected by the citizens of each Member State”; “Switzerland is a Member State of the EU”. The ranking shows the overall rate of correct answers.

Update on 3 July: The figure for Poland has been corrected.