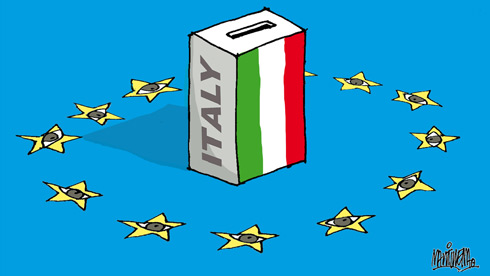 ‘A serious warning to Europe’

The narrow victory of the centre-left coalition in elections on February 24 and 25 has left the country without a clear majority. The European press wonders about the implications of the vote and considers the consequences for Europe.

The result of general and senatorial elections amounts to a rejection of the austerity policies of outgoing Prime Minister Mario Monti, who was the major loser. This is the underlying logic of the surge in support for the unashamedly populist comic, Beppe Grillo, and the extraordinary comeback of former PM Silvio Berlusconi, in spite of the fact that many consider the former prime minister to be the main instigator of the crisis affecting the country.

“Populism and the clamour of lies hold sway,” remarks Süddeutsche Zeitung, in the wake of general and senatorial elections in Italy. Without Mario Monti, the major loser in the vote, Italy would never have survived the crisis, points out the Munich daily. The newspaper continues —

The Italian vote should be a lesson to all of the participants in the EU crisis: he who hesitates will lose and he who stammers will be punished, because half measures simply do not count. In casting their ballots, Italian voters sent a very simple message: “we don’t understand a thing.” We should not insult them for this reason, because they have the misfortune to live in a political climate of half-truths, where satire has become a “raison d’état”. With Silvio Berlusconi and Beppe Grillo, there were two comics running for office, and both of them have been rewarded for their libellous ranting.

“The electorate has plunged Italy into chaos,” complains De Volkskrant, which argues, in the light of Mario Monti’s defeat, that “Europe was the main loser in the elections” —

In Brussels and most European capitals, the hope was that Monti, who took office and saved Italy from financial collapse in 2011, would be able to pursue his policy of reforms by forging a coalition with Pier Luigi Bersani […] The rise of Silvio Berlusconi and the protest vote accorded to [Beppe] Grillo should be serious cause for concern among European leaders, all the more because the toxic mix of anger over austerity and corruption has also emerged in Spain.

In Athens, Kathimerini worries about “the risk of anarchy in Italy”. Almost a year after elections plunged Greece into a political deadlock that could only be resolved by a fresh vote, the daily examines the parallels between the two countries —

In Greece, the election divided the “indignados” into three groups: those who voted for the radical-left coalition Syriza, which was already present in parliament, those who backed the populist Independent Greeks and those who gave their support to Golden Dawn. In Italy, the entire population fell under the spell of the tragedian’s pose adopted by the anti-establishment and non-fascist Grillo, and a much smaller number succumbed to the theatrical gestures of political veteran, Berlusconi. Along with their populist rhetoric, Grillo and Berlusconi have demonstrated a degree of similarity in their opposition to German hegemony and their appeals to national pride.

“It seems that new PM [Pier Luigi] Bersani will have his hands tied by a strong conservative opposition, which will prevent him from continuing reforms begun by Mario Monti,” writes Rzeczpospolita in Warsaw. For the conservative daily —

Several scenarios may be in the offing. One possibility is fresh elections. However, the problem is that to avoid a repeat of the current situation, the electoral law must be changed. But how can this be done in a split parliament? Can a new parliament be elected for just one bill? Italy is in a trap.

Le Monde’s editorial describes the political deadlock in the wake of the Italian elections as amounting to a “Basta Così!” [Enough is enough!] on the part of Italian voters, a slogan that is not only “worrying for Italy but also alarming for Europe” —

The Italian deadlock is a serious warning to Europe. In a country that has helped cement commitment to Europe since the signing of the Treaty of Rome in 1957, more than half of the electorate gave its support to candidates who based their campaigns on opposition to a “German Europe” (Berlusconi), or a simple ‘no’ to Europe and the constraints imposed by the euro (Grillo). As a result, Brussels, Berlin and Paris will now have to come up with answers to a number of questions: To what extent is it possible to impose austerity policies on a public that is increasingly hostile to them, not just in Italy, but also in Spain, Greece and Portugal? How can this be done without further undermining Europe’s democratic legitimacy? And how can this contradiction be overcome without threatening the future of the European Union? Europe’s leaders can no longer expect to stand back from these issues.

“Europe stumbles over Berlusconi”, headlines ABC in Madrid, which examines the options for a European Union faced with the “the obstacle of populism”. In the light of the success of former prime minister Berlusconi and Beppe Grillo, Mario Monti’s failure amounts to a failure of the “orthodox reformist agenda in Europe.” It follows that “the EU and the political leaders who were responsible for ‘operation Monti’ will have to think seriously about the reasons for this debacle,” remarks the daily. The newspaper’s columnist Ignacio Camacho also wonders if the success of Beppe Grillo’s Five Star Movement can be replicated elsewhere in Europe, notably in the South, adding —

The strong surge in support [for Grillo] has highlighted a social pathology in the Mediterranean region, which, in the political doldrums of Italy, has found expression in an anti-establishment sentiment. Attempts to imitate him will be facilitated by the plummeting prestige of political elites in countries like Spain.