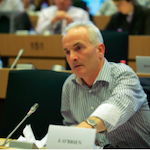 This documentary about how a group of struggling Irish fishermen influenced the reform of the European Common Fisheries Policy shows us how another Europe is possible, if citizens mobilise to defend the public interest.

Occasionally, ordinary people succeed in having their voices heard and seeing their interests win out against those of multinationals in their appeals to European institutions. It’s rare enough to be worth exploring, and that’s what director Loïc Jourdain is doing in his documentary, A Turning Tide in The Life of Man, which has won many accolades and is now in cinemas.

Over many months, Jourdain followed the fishermen of the small island, Inishboffin. Competing with the deep-sea trawlers encouraged by the European Common Fisheries Policy which penalises small coastal fishing and favors industrial fishing, the fishermen find themselves deprived of their livelihood, and their traditional way of life seems threatened.

John O’Brien is one of those fishermen. He sees the results of his labour dwindle from day to day due to the industrial exploitation of fish stocks by large fishing companies, and the banning of drift nets by order of the European Union and Irish government policy. Then there is the plethora of regulations imposed by European bureaucracy on large as well as small fishing operations. O’Brien is sure that he and his fellow fishermen in Inishboffin are not the only ones in Europe experiencing this problem. So, low on options, he decides to head to Brussels to assert the interests of small coastal fishermen.

With the aid of the NGO, International Collective in Support of Fisherworkers (ICSF), the consultant Michael Earle and many generous experts, John O’Brien managed to unite fishermen all over Europe as well as other island communities, to encourage a better understanding of the particularity and specificity of their way of life. Forming around the Ocean 2012 coalition, O’Brien and his allies manage, after a self-evidently unequal legal battle against industry lobbies that lasted eight years, to influence the reform of the Common Fisheries Policy, such that the conditions and interests of small fishing operations are taken into account and the more absurd measures abolished.

John O’Brien’s story is exemplary for demonstrating the way in which European citizens and local communities can successfully assert their needs and interests — indeed, the public interest — when they can organise themselves, just like the multinationals and industries. In fact, European institutions are not necessarily hostile to this form of citizen lobbying, especially when they can formulate new policies or reforms, and represent the public interest.

Unfortunately, the representatives of civil society have more modest means than industrial operations and multinationals. This obliges them to unite and work together with other interested parties . Thankfully, good-will is often easy to come by. This is an example, therefore, of the “Citizen lobbying” conceptualised by the Italian legal expert, Alberto Alemanno, as a tool for exerting pressure on institutions, and for democratic and participative development.