Report Portrait
Andreas Georgiou in his Athens office in January 2012 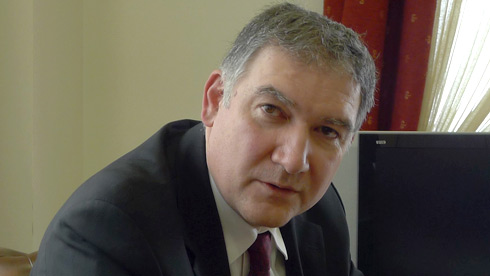 Greek statistics are now finally reliable, even according to Eurostat. However, the man largely responsible for a shake-up of working practices in the country is now facing charges of treason.

Andreas Georgiou in his Athens office in January 2012

The Head of the Greek Hellenic Statistical Authority (ELSTAT) has had a large heavy safe installed in his office. Andreas Georgiou, who was appointed to lead the organisation in August 2010, placed the order for a safe when it became apparent that board members had been intercepting his email. Since then, confidential information has been kept safely under lock and key.
There are no half measures in the battle for figures in Greece. Statistics are the weapons that are being used in the country’s current financial war. Not only between Greece and its creditors, but more critically between Greek political parties.
From the very outset, the debt crisis has actually been about the budget deficit and national debt. And it has been exacerbated by a lack of reliable figures and the fact that consecutive governments had lied about financial matters.

Greece was synonymous with lies and deception

Now the European statistics agency (Eurostat) and the IMF have finally gained access to reliable data, however, those responsible for supplying the figures stand accused of treason.
During the interview held at his office, Mr Georgiou has to choose his words carefully to avoid providing his opponents with ammunition. His agency is housed in modern brick-built premises, at a busy crossroads in the area where Athens merges with the seaport of Piraeus. The situation is “surreal” he admits. “I am being accused of acting in accordance with both Greek and European law.”
Mr Georgiou, 52, decided to resign from the IMF in Washington and return to his homeland in 2010. Starting in October 2009, when its budget deficit was adjusted from 3.7 to 12.5 per cent of GDP, which was later raised to 15.8 per cent, Greece was the subject of harsh criticism from the European Union. Greek statistics had become synonymous with lies and deception. No one had any more faith in its official figures, while the costs of Greek borrowing had soared to the point where the country was on the verge of bankruptcy.

When the crisis began, ELSTAT was part of the Ministry of Finance. At the time, Greek figures almost always carried a footnote in European statements to indicate that Eurostat had been unable to verify whether they had been established independently and in accordance with the applicable regulations. Since 2004, the European statistics agency had sent 10 delegations to Athens with a view to improving the reliability of Greek figures, but apparently to no avail. In January 2010, it issued damning report which contained accusations of falsified data and political interference.
From the moment that Mr Georgiou was placed in charge of the Greek statistics agency, which was subsequently named ELSTAT and separated from the Ministry of Finance, the footnotes disappeared. The past five six-monthly reports have received a green light from Eurostat, which is tantamount to an administrative revolution. However, the turnaround has not gained Mr Georgiou any friends at home. No politicians want to be seen with him, nor are they even prepared to publicly defend him. In fact, political chat shows on domestic radio and TV have even dubbed him a traitor who deserves to go to the scaffold.

‘A figurehead appointed by our creditors’

When prosecutors concluded that there were sufficient grounds for a case in late January, the trade union representing ELSTAT employees insisted that Mr Georgiou be dismissed from his post. The union’s press release read: “Mr Georgiou only serves to compound problems for everyone!” Thereafter, it claimed that he was “a figurehead appointed by our creditors.”
The Head of ELSTAT was also accused of failing to serve the “national interest”. The sentiment was that accurate statistics were one thing, but exaggerated honesty and openness were quite another. Having been actively involved in the reform of ELSTAT, Eurostat has also indirectly been put on trial. The European agency remains outspoken in its support of Mr Georgiou.
Just a few months after his appointment in October 2010, a furious union leader rushed into his office waving a document that Mr Georgiou had emailed to his legal advisor. An investigation subsequently carried out by an IT expert revealed that Mr Georgiou’s email account had been hacked almost on a daily basis. Literally thousands of emails had been read and downloaded by an ELSTAT board member. The board member was later dismissed by the Minister of Finance, and ELSTAT was also restructured. On the foot of a complaint submitted by Mr Georgiou, police investigated the implicated board member. “The man was charged more than two years ago. As far as I can gather, however, no further steps have been taken since.”

No time for political friendships

The state of affairs at ELSTAT is evidence of the stubbornness of Greece’s former officials, and reflects the firm resistance to reforms within sections of the government. Civil servants are still not assessed on the basis of their performance. And there have been very few dismissals, despite the fact that public bodies are far too large and expensive in relation to their effectiveness.
Nonetheless, the number of civil servants is now in sharp decline. Faced with the prospect of cutbacks and the acute stripping down of pension schemes, large numbers of public servants have opted to take early retirement. At ELSTAT itself, the workforce has been reduced from 1,000 to 850.
The problem seems to be that Mr Georgiou failed to abide by unwritten rules. Employed outside Greece for 31 years, he did not spent time maintaining political friendships or networking with bankers. This was a conscious decision, Mr Georgiou admits.
“We had to build a bulwark against political interference, so that people could return to proudly practicing their profession. This agency was the laughing stock of Europe. Now it is the prodigal son that has returned to the European statistics fold.”