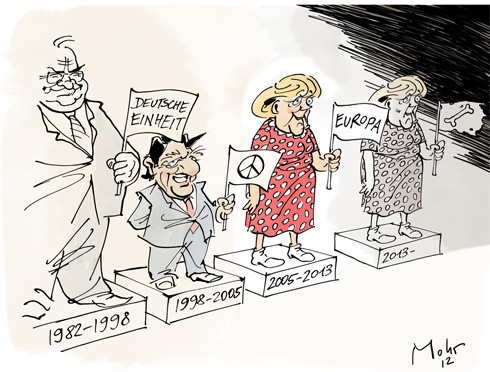 Helmut Kohl was Chancellor of the "German reunification". Gerhard Schröder, of peace. Angela Merkel has first been the Chancellor of Europe, but her second incarnation may be that of the chancellor of austerity.

On December 4, Angela Merkel was electedto the head of the Christian-Democratic Union (CDU) – for the seventh time – with 97.94 per centof the vote of delegates who attended the party's congress in Hanover. She will therefore lead the 2013 general election campaign, which she has a good chance of winning. Currently polling around 68 per cent of the popular vote, she is the most popular ruling post-war German Chancellor.