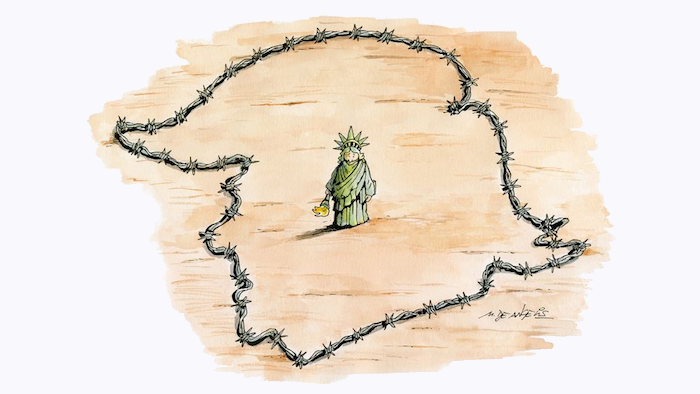 European newspapers reacted with astoundment, pessimism and fear to the election of controversial billionaire Donald Trump to the White House, following a campaign as brutal as it was divisive.

Commentators referenced his xenophobic, homophobic and misogynistic comments, but also expressed hope that the solidity of American democracy and on the businessman’s pragmatism would ensure a smooth transition and a responsible presidency.

“Anger has won, anti-establishment rage has triumphed. A shady billionaire, who has not paid taxes for twenty years, lies through his teeth, has openly flirted with racism, xenophobia and sexism, who has never held any public or elected office, has managed to harness it. Masterfully”, Jémôme Fenoglio, Director of Le Monde observes. He adds:

Hillary Clinton is not the only loser from this vote. A wave of anti-establishment anger has hit the traditional elites on both sides of the Atlantic. Donald Trump’s election is a major upheaval, an historic event for western democracies. Like the fall of the Berlin Wall, like 11 September 2001, this event beckons the start of a new world, for which we can scarcely discern the outlines. But one of its traits is now certain: in this world, everything we thought was impossible or unrealistic, is now envisageable.

For Roland Nelles, Donald Trump’s victory is quite simply a “political catastrophe for the US and the world” and, unlike other commentators in the German-speaking press, Der Spiegel’s commentator questions whether America’s system is strong enough to counterbalance Trump’s thirst for power:

The world and the US are now threatened by a dangerous period of instability: Donald Trump wants the US to become ‘great’. [...] Will the American system of checks and balances between institutions be enough to stop a man who talks like an autocrat from also governing like an autocrat? [...] There is of course hope that the political system will be strong enough to limit its president’s desire for omnipotence. But there is no guarantee.

“The black swan, a highly improbable event, has struck again: Trump has won the US elections. It is essential to understand what has happened so that we do not succumb to nihilist pessimism”, Alvaro Vasconcelos notes in the columns of Público. For the former Director of the European Union Institute for Security Studies:

supporters of democracy who are suspicious both of Trump’s conservative populism and leftist activists are mistaken. If we want to preserve the European Union from the effects that the success of Trump’s populism may have in France, for example, we must accept the need for wide-ranging reforms, making our democratic systems more participative and less political, less dependent of the market’s approval. Another narrative is possible, one that accepts diversity and multiculturalism as a source of wealth, that considers social justice a right and defends the true power to vote. And it certainly amounts to the great political struggle of our time.

“Donald Trump’s victory is a shock for many”, notes Pieter Clock in De Volkskrant. He adds:

There are many reasons for despair following this election. If he fulfils his campaign’s promises, the world will end up in a worse place. The treaty on climate change will be binned, undocumented immigrants will be ejected, xenophobia stocked and poorer Americans will lose their medical insurance. Protectionism will reign alongside an each-to-their-own mentality. Pax Americana in Europe is under threat. The Baltic states have to fear the worst if no one is prepared to stop Putin. But there are also reasons to hope this will not be difficult. US electoral rhetoric often has little practical effect. Trump has no ideological machine backing him. He essentially led a solitary campaign. His opinions change constantly, opportunistically, and are often contradictory.

Editor-in-chief of Gazeta Wyborcza, Adam Michnik, lists a series of unanswered questions: “What will Trump’s presidency look like? Will we have the candidate who made irresponsible and demagogic declarations and promises, while dishing out threats? Or rather the voice of a serious head of state that we heard during his acceptance speech?” For Michnik, this election is a true turning point because:

27 years after the fall of the Communist dictatorship in Poland and the Berlin Wall, two great democracies, the UK and the US, have led the world into a very dangerous period. Will America’s democratic institutions be stronger that the populist and xenophobic fever sweeping a large portion of American society? Is this the beginning of the end of Pax Americana? Will the EU be able to reassert itself at the dramatic turning-point in its history?

“What we are witnessing now is worse than the crisis of democracy, because a crisis assumes – above all – the hope for a quick recovery”, Björn Wyman writes in Dagens Nyheter after Donald Trump’s victory in the US elections. The editor of the newspaper’s Culture section makes the analogy between the current political situation and that of Europe in the 1930s:

The US elections risks unleashing hatred against minorities similar to that suffered by Jews in Austria after the 1938 Anschluss, or the same openly xenophobic climate as in the UK after the Brexit vote,. Donald Trump spectacularly represents a global populist tide, and is an example of the authoritarian surge crossing the world. Disdain for the truth and political mores that were institutionalised by Vladimir Putin has now been fully established by Donald Trump.

El País recognises in its editorial that Donald Trump’s “unexpected” victory in the US presidential elections is “legitimate”, but at the same time “requires him to respect the system that helped him reach power”. The Spanish daily judges that, despite the “conciliatory and moderate tone” struck by Trump in his first speech:

the world’s populist leaders have good reasons to celebrate Trump’s win, because it allows them to amplify their own sovereigntist and nationalist demands. We could easily slip into a much more dangerous dynamic than that of Brexit. The US is the keystone for the international order: if it is taken away, this order will be shaped, ipso facto, by the wishes of Moscow, Beijing and other capitals: a placed governed by the law of the jungle. The world must therefore remain steadfast and vigilant. Translated from the French by Simon Pickstone