Are things getting out of control?

The campaign against pension reform has provided a catalyst for other movements that are less easily controlled. Now that marching workers have been joined by huge numbers of secondary school students, the French press worries about a situation that could soon get out of hand.

Youths clash with police at Nanterre, near Paris, 19 October 2010 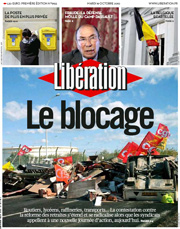 Launched at the end of September, the movement to combat pension reform underwent a major change in mid-October when huge numbers of young demonstrators joined in protests, which have also been marked by the participation of rioters intent on destroying public property. At the same time, the partial picketing of France’s refineries and fuel distribution network has raised the spectre of petrol shortages.

Libération believes we are witnessing the emergence of a “disquieting” conflict in French politics between the elite and the people: “on one side, we have the government, union leaders, and factions in the government that are willing to compromise to break the deadlock. Ranged against them are growing numbers of radical secondary school students, angry professional groups, and factions within the CGT [France’s main union]. The new opponents of the reforms may be in the minority, but their participation will ensure that conflict is no longer be confined to the field of public finance.” 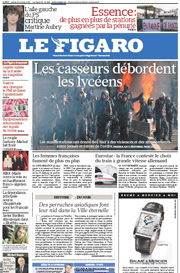 Le Figaro launches a predictable attack on “self-serving militants, striking to protect cushy working conditions.” For the right-wing daily, these people “form a privileged class of public servants, which benefits from special entitlements. And they are truly conservative, in as much as they refuse to accept even the slightest change. What does it matter if France sinks into debt, just as long as they can continue to comfortably sponge off the state.”

Les Echosis quick to point out “that there is no law or union agreement to justify the blockading of refineries and fuel storage plants, or the building of barricades on railway lines and roads.”

However, the student unrest may be indicative of a more deep rooted problem. Le Figaro is concerned that it could be the first sign of “a war between the generations” that would imply grave consequences. “What we are seeing is deeply worrying. We do not know why so many young people have joined the demonstrations in recent days. If it is simply a passing antipathy to Sarkozy stirred up by the Socialist Party, then the problem is not a serious one. (…) However, if it is the first manifestation of a challenge to the redestributive pension system, which has been one of the key pillars of the French social project for more than 65 years, that is much more alarming.”

as Slate points out, “setting aside the issue of pension reform, there are many reasons for young people to protest in the streets. In a country with a revolutionary tradition like France, where young people are often described as a problem rather than a solution and where the outlook for their future is increasingly grim, what is remarkable is the fact that they are only beginning to rebel now. The surge of youth participation in this movement will be a nightmare for President Sarkozy. He may have been counting on deriving some political benefit from facing down the unions, but now that the youth of the country have taken to the streets, he risks losing everything.”

And for all those who want to draw parallels between the current situation and “the havoc of May 1968, which was followed a conservative backlash in June 1968,” the online news magazine reminds its readers that “in 1968, young people rebelled in a narrow-minded but prosperous France. Diametrically opposed conditions prevail in the country as we know it today.”