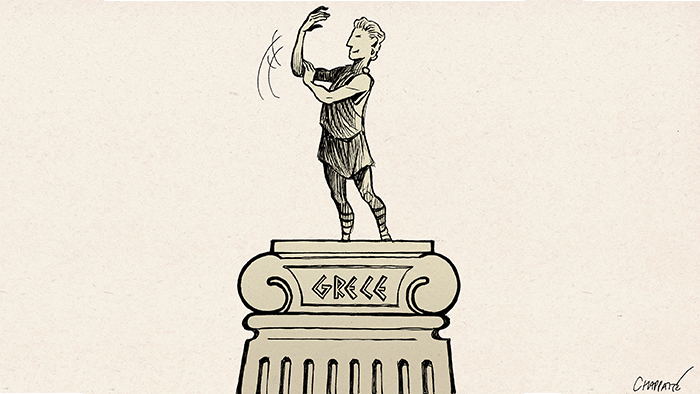 As PM Alexis Tspiras continues vying for support among his fellow Europeans, the Polish press has been trying to examine his strategy – weighing up his chances of success in convincing Angela Merkel to ease the pressure on austerity.

He may have named his youngest son Ernesto and have hung until recently a Che Guevara poster in his office, but Alexis Tsipras is not willing to fan the flames of revolution, argues Newsweek Polska. He is not a “blind ideologist but a formidable strategist who loves political games”, adds the weekly, stressing that the new Greek leader skilfully filled the political vacuum created by the collapse of Greece’s long-established two­party system. As Greek historian and sociologist Iannis Carras explains –

His main asset is the fact that many Greeks see him as a politician who stood up to defend his country. Which is why Tsipras will continue to use patriotic and nationalist rhetoric currently shared by the Greek left and the rightwing parties.

But he won’t be able to meet the “unrealistic promises made during election campaign” even if he has started dismantling some of the reforms of his predecessor. He has suspended the privatisation of the Piraeus Container Terminal and DEI, an energy supplier, raised the minimum wage and plans to reemploy some of the Greece’s fired public sector workers. However, experts put the cost of Tsipras’ promises at 10bn dollars, money Greece simply doesn’t have.

This is why, argues Gazeta Wyborcza, the new Greek Finance Minister, Yanis Varoufakis, has come up with a four­point recovery plan which is crucial to the government’s survival. It means linking the interest on government debt to GDP growth, continuing reforms but with “a laser not a butcher’s knife”, boosting investment by the European Investment Bank not only in Greece but across Europe and finally creating a new social assistance programme in the euro zone.

Key elements of the plan depend on the consent of EU partners and Brussels. This explains why Tsipras and Varoufakis are tirelessly travelling across the continent seeking support and looking for allies. When asked what would happen if EU leaders and the Commission reject his proposals, Varoufakis recently admitted that “death would be better”.
Small wonder Tsipras has toned down his revolutionary rhetoric ahead of the final showdown with the German chancellor. But Newsweek Polska stresses that Angela Merkel currently seems less willing to compromise than in 2012, when she feared that the collapse of Greece would result in the break­up of the euro zone –

At present German chancellor is more inclined to accept a theory of the weakest link – getting rid of the burden of the weakest member would help the euro zone. The negotiations between Athens and Berlin will be extremely difficult. One of the German journalists has put it bluntly: “Mrs. Merkel finished off all her internal and external enemies starting with Helmut Kohl. She’ll have Tsipras for breakfast”.