Report Europe’s immigration challenge (4/5)
A demonstration by refugees from the Traiskirchen camp in Vienna, November 11, 2012. 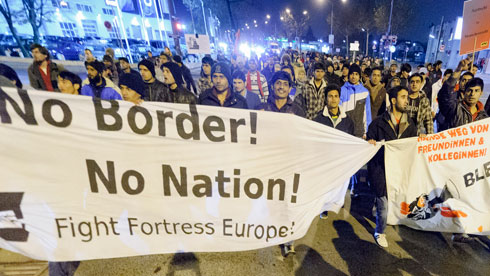 Austria’s message to refugees: be silent or risk going back

Austria, where the Christian Democrats are a coalition partner, is deporting Pakistani refugees, practically sentencing them to death. And yet it’s been only weeks since Pope Francis spoke on their behalf. His words moved many but obviously didn’t reach the ears of Austrian politicians, notes a Gazeta Wyborcza columnist.

©Martin Juen  | A demonstration by refugees from the Traiskirchen camp in Vienna, November 11, 2012.

The whole nasty story wouldn’t have happened if the illegal Pakistani immigrants, who had applied for asylum in Austria, simply kept silent. But, thinking they were in a democratic country, they decided to publicly demand decent treatment. Instead of vegetating for years in the overcrowded refugee camp in Traiskirchen near Vienna and working illegally, they staged a street demonstration in November last year to protest the poor conditions in which they are kept. The police immediately chased them away, so they took refuge in one of the churches, until being offered temporary shelter by the Servite monastery. But the authorities didn’t forget: on Sunday, 4 August, eight of the 40 Pakistanis involved were arrested and immediately deported.

Austrian activists who, together with the Catholic Church, support the Pakistani refugees, tried various ways to prevent their deportation. One activist bought a ticket for the same plane on which a deported Pakistani man was being flown out of the country and tried to prevent it from taking off, but was overwhelmed by the police. Worse still, the police have now turned against the activists themselves. Three people were arrested on human trafficking charges last week, and the police searched the monastery. [[The authorities say nothing will prevent the deportations from going on as planned]].

I wouldn’t be writing about this in such detail if I hadn’t met the Pakistani refugees from the Vienna monastery in person. I spent a few hours with them back in April. Their eyes reflected a sense of fear and helplessness. Most had been human rights activists in Pakistan and had to flee. [[For them, deportation means a death sentence: if not by the security forces, then by the Taliban]].

The asylum seekers couldn’t understand why the Austrian government considered their home country to be an oasis of democracy. Even the Austrian Foreign Ministry, they pointed out, had issued warnings for Austrian tourists to stay away from Pakistan. So why, when it came to the refugees, did the authorities say they weren’t in danger and were prepared to send them back?

Austria is, undoubtedly, a country ruled by law, with regulations on the treatment of immigrants. It is also true that many Asians or Africans come to Europe for purely economic reasons under the pretence of religious or political harassment.

A small country like Austria simply cannot receive them all. And yet the law must not be applied en masse. Each and every individual case should be processed in due course. Refugees are not cattle. Moreover, it’s been public knowledge for years that the conditions in the Austrian refugee camps are scandalous.

But the government in Vienna has never cared about what the critics say and now has chosen the worst possible way of handling the issue. The deportations of the Pakistanis began on the eve of the election campaign, and at a time when their advocate, Cardinal Christoph Schönborn, the Archbishop of Vienna, was out of the country and couldn’t intervene on their behalf. In this context, allegations that the SPÖ/ÖVP coalition is using the issue to earn political capital by playing to the populist gallery come as no surprise.

But it is not only in Austria that refugees face terrible conditions. In Greece, border police chase them like wild game. The Italians are known to have stealthily sent African immigrants to Germany. In Britain, a recent government campaign warns illegal immigrants that if they don’t leave, they may end up in jail. In Poland, as public television has recently showed, refugee detention centres look and operate like regular prisons.

Speaking a month ago on the Italian island of Lampedusa, where thousands of African “boat people” have found temporary refuge, Pope Francis said he wanted to persuade Catholics to change their attitude towards the immigrants’ tragedy so that we started treating them as people in need. How long will it take for Europe to heed his words?