Banks feel at home in Brussels

The European Union aims to regulate international finance. But for want of independent experts, it turns to the banks for advice – which, with no-one there to contradict them, pull all the stops to ram their interests through. Some Eurodeputies have now come out against this smooth-running entryist attack. 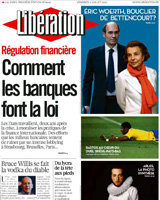 Are the banks now in the process of gutting the substance of international finance regulation? At any rate, they are doing a lot of lingering and bustling about in the halls of Parliament over in Strasbourg or the European Commission up in Brussels to put their views across. And with hardly anyone around to contradict them, they go for broke.

Bank levy, bonus cap, speculative fund rules, naked shorting ban – there’s no dearth of targets for them to fire at. And that’s what worries several Eurodeputies, across the political spectrum, who last week raised the battle cry against the unfair fight between almighty finance and virtually absent civil society.

Banks past masters of entryism

Yesterday socialist MEP Pervenche Berès, presenting the main conclusions of her report on the financial crisis, made quite a sensation by suggesting member states be called on to boycott Goldman Sachs investment bank. But don’t get too excited: Berès herself has no illusions: “This proposal won’t be heeded in the end,” she knows, “but it is a way to raise the issue of the dual power of these banks.”

The banks have become past masters in the art of what’s known as entryism. For example, the legislation being drafted on European financial oversight stems straight from a report drawn up for the Commission and submitted on 25 February 2009. Now that report, which espouses “light-touch” regulation, was prepared by a group of “experts” presided over by Jacques de Larosière (ex-Banque de France chief, but more importantly current advisor to the CEO of BNP-Paribas).

Of the seven professionals by his side, three are from the private sector, even if they have held public posts at one time or another: Rainer Masera (ex-Lehman Brothers), Otmar Issing (Goldman Sachs) and Onno Ruding (Citigroup). Which makes four bankers (from three US banks). And then there’s Callum McCarthy, ex-Chairman of the UK Financial Services Authority, notoriously opposed to tight oversight. In other words, a majority of the panel are from or close to the financial industry. So how can we possibly wonder at the outcome?

It’s perfectly natural, ripostes the entourage of Michel Barnier, commissioner for the single market and financial services. They’re the best experts in a scarifyingly technical domain. Who else is there to ask? And that’s precisely the problem. “This stuff is beyond the Commission officials,” corroborates a French functionary in Brussels. “So they consult the banks.”

The present state of affairs is serious enough for Michel Barnier himself to admit, last week, that there is a problem and the much-touted “expert groups” need to be “opened up and more diversified”. Over the years the Commission, for want of the requisite personnel and in-house expertise, has surrounded itself with over a thousand “expert groups” to consult in drafting legislation.

The opaque workings, composition and leverage of these groups are regularly denounced by the NGO Alter-EU, which specialises in tracking lobbies at work in Brussels. In the financial sector alone, there are 19 expert groups based at the Directorate-General of the Internal Market and Services department. According to Alter-EU, which put out a study on the matter in October 2009, eight of these committees are dominated head and shoulders by the financial sector, including the groups on derivatives, “banking issues” and even the one on market manipulation.

Don’t fall out with US

But the Commission does not take kindly to inquiries about them. Libération asked for a complete list of expert groups with all the names: two months later, the Commission gave us a list of…Web links. The information provided there is, at best, incomplete: the group on “banking issues” does in fact give the experts’ names, but not the names of the companies they work for. The one on derivatives tells us there are 34 experts representing the banks and 10 from the public authorities, but the private-sector names are kept under wraps.… In any case, it is alarming to note that there are nearly twice as many finance industry reps as public-sector experts entrusted with drafting financial legislation.

So don’t be amazed if none of the bills discussed in the European Parliament or the Council of Ministers shows a real break with the past. “The most astounding thing is that the Commission is very susceptible to the Anglo-American banks’ predominant arguments,” adds our French functionary. “As if the main thing were not to fall out with the United States.”