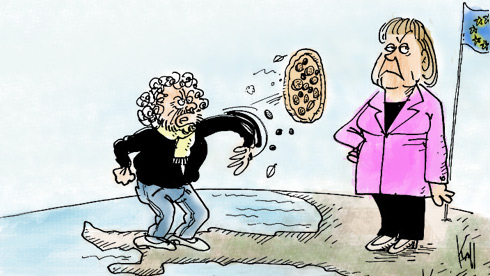 The comedian's Five star movement was the revelation of last Italian election. Its anti-establishment views and "digital democracy" methods are shared by many political movements across the EU, and they could form a common front at the European elections in 2014.

Beppe Grillo has a new objective: Europe. While Italian politics struggles to comprehend the political tsunami that has followed his election, from his home in Genoa the leader of the Five Star Movement's mind is already jetting across borders. His stated aim is to export his experience to other European countries where the key aspects of the political and economic crisis are very similar to the one in Italy. “We can't think that we've done it all and stay here in Rome. We need to push on and the target is Strasbourg in 2014, the European Parliament. Because there is a similiar need there, as in Italy and because if we find some support in Europe, the change will be far-reaching,” he tells his followers.

A man given to flights of fantasy or a visionary? The objective has become a lot more concrete in recent weeks when the debate at his meetings broke through into other countries and languages. Those behind the movement call it a “revolution”, “a kind of '68 that has the internet as its glue”.

“We've just started,” says Grillo, who, with his followers - as he has explained frequently to those who have been listening to him recently - already have contacts, especially with eastern European countries from Slovakia to Romania and Bulgaria. But then they're turning their attention to Greece, Spain and Portugal. “This is what I mean when I say that we've just started.”

The subjects particularly focus on environmental matters but also on de-growth. While the Indignados and the German green movement are closely watching developments, this is less pronounced among exremists from the left or right, such as The Greek Golden Dawn, Syriza or even the National Front in France. As in Italy, we're talking about the millions of citizens who are bound together by common battles rather than ideologies and the groups to which they belong. We're talking about Europeans who have not yet found - or no longer have - a political stable. We're talking about moderates too and young people, but not just young people, in Italy. “Of course the Five Star label won't be used but the programmes and mechanisms are exactly the same. In every country, they'll find their representatives.”

The European press is divided when it comes to Grillo. Manuel Castells, in La Vanguardia, translated in Italy by Internazionale, writes how “the experimental nature of this traditional anti-politics project is clear,” adding: “But it has been supported by millions of people and by many young people who identify themselves with the desire to get out of the blind cycle of manipulation and non-transparency in the delegation of powers. The divide between civil society and political institutions is growing and is a phenomenon that is also widespread in Spain.”

Spain, of course, is one of the starting points in what was intended to be a movement sweeping across Europe. Back on October 15, 2011, the squares were filling up with young protestors who wanted a different kind of world. There were Spanish and French indignados and American Occupy Wall Street protesters. The streets were packed with thousands of people. In Italy there was looting and clashes with police, but then nothing.

What happened to those protests in the end? They ran out of steam in social networks as they waited for a new organisation to emerge. So it was that Italy, a country that gives its own twist to any political phenomenon, found itself without any indignados on its streets and instead a movement that wanted to make its way into the institutional set-up. And that was what happened.

Now the challenge is to communicate a common language that unites the movements within and outside Europe and that, as they say in the Five Star Movement, can be constructive - decisive in its messages but respectful of the institutions. “There's no room here for extremists and, worse still, racists,” says someone close to Grillo. Because the choruses of "Stuff you" and “Let's send them all packing” are of no use now that it's about going into parliament”. And they add: “It'll be an overhaul of the current political situation that will come about through a new enthusiasm for politics.”

There are different reactions from abroad. “Italy hasn't just let in the clowns,” says Jonathan Hopkin, professor of comparative politics at the London School of Economics and Political Science. He takes a hard line in his response to The Economist, which saw in Grillo's progress and the umpteenth return of Berlusconi, another lamentable twist in the Italian political saga. “It isn't just a challenge to austerity but to the traditional party system itself. The economic crisis has helped, but the Grillo attack against corrupt and egoistic Italian politicians had already started before the beginning of the decline,” says Hopkins. “Throughout Europe, membership of political parties has reached the lowest level since the Second World War," he adds. Proof of this [frustration with politics] can be seen in the success of the UK Independence Party in Great Britain, the Pirate Party in Sweden, the anti-Islam party of Geert Wilders in the Netherlands, not to mention the populist parties such as the French National Front. He concludes: “Italy could pave the way for a change that will fascinate all of Europe”.

But for now, only one party openly against austerity has won elections in a European country since the onset of Europe's economic crisis. Rajoy's Spain and Portugal's Pedro Passos Coelho are among the countries where austerity continues to rule.

Just a week ago, the Portuguese prime minister wrote a long post on Facebook – which he signed off as "Pedro" – and in which he asked his people again to make sacrifices. He had more than 36,000 replies, with the most popular one being the reply that quoted Reagan: “Government is not a solution to our problem. Government is the problem."

There's a lot of weariness in European countries that have been asking people to tighten their belts for years now. A proposal from the Five Star Movement that could be tempting is the idea of creating a European Union that can explain itself to its citizens. “I have never said that I want to be in or out of the euro. What I want is accurate information. I want a plan B for survival for the next 10 years. And then, with a referendum, we can decide. First we need to be informed. We're trying to understand what the costs and benefits are. Just suggesting that, people say: you're a demagogue, you're crazy, you want to drag Italy into defaulting, you're irresponsible. Just because we talk about looking into this hypothesis”.

But this thinking brings together so many citizens, who see the European Union as something distant, scattered around in big meeting rooms in Brussels and Strasbourg. And this new attempt at Italian-style dialogue may please many people. While everyone is nervously looking at the Italian parliament today, there are those who are already thinking about the European elections in 2014.