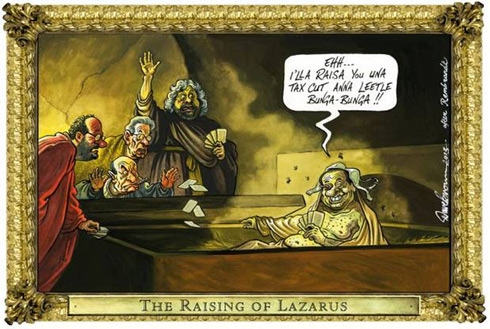 Berlusconi back from the dead

At the end of elections for Italy's parliament and Senate on February 24 and 25, former Prime Minister Silvio Berlusconi may well be far from playing his final hand in Italian politics.

By 5pm on February 25, estimates placed the centre-left coalition led by Pierluigi Bersani heading the Chamber of Deputies, with 35 to 37 per cent of the vote, ahead of Berlusconi's centre-right coalition, which polled between 29 and 31 per cent.

However, in the Senate, pending the final results arriving from the regions - among which Lombardy looks crucial – Silvio Berlusconi is estimated to have edged in to the lead scooping 31 per cent, ahead of Bersani's camp, which is thought to have won around 30 per cent of the vote.

Further estimates suggest Beppe Grillo's Five Star Movement could be the party to have won the largest single share of the vote in the Senate with 24 per cent, while collecting between 19 and 20 per cent in the Chamber.

The biggest loser in the election seems to be outgoing Prime Minister Mario Monti, whose coalition has gathered around 8 to 10 per cent of votes in the Chamber and 9 per cent in the Senate.