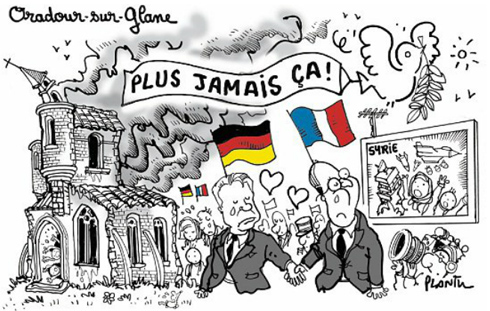 On the banner: Never again
Joachim Gauck and Francois Hollande

The French and German presidents travelled together, on September 4 to Oradour-sur-Glane, site of a massacre committed by the SS in 1944.

"You're the dignity of Germany today, able to confront the Nazi barbarism of yesteryear," said François Hollande to his counterpart.
"I share your bitterness over the fact that the killers have not been brought to justice," Gauck replied, adding that, "Today, Germany is a country that wants to build Europe but not dominate it."

On June 10, 1944, Reich division came to this village in the centre-west of France and killed 642 inhabitants including 350 women and children who were burned to death in the local church. The ruins of the village are preserved in the state in which they were left.

You can unsubscribe anytime *
Categories
GermanyFranceGermanySyria