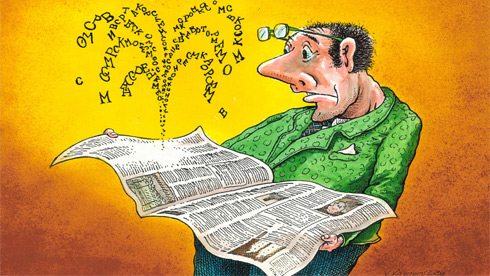 British tabloids and their Euromyths

Remember how fresh doughnuts vanished from bakery shop counters, to be replaced by packages of doughy lumps, once fresh, squeezed under plastic wrap? Another regulation from the European Union, shopkeepers ruefully explained. Wrong. It was a myth.

How such myths take shape

Pavel Poc, MEP from the CSSD, who collects the urban legends in circulation about the mad rubber stamping of the European Union, is busy deconstructing them and tracing them back to the dubious truth that got the snowball rolling.

His collection has some real gems – like the myth that the European Union is set to regulate the size of condoms. Looking deeper into how the myths arise, he noted that most got their start in the UK media.

“The standard method is that a British tabloid pulls out a few lines from new European directives or events in Brussels and slaps on one of its beautifully bombastic headlines, and that’s what journalists in other countries pick up on. Then, partly perhaps because of inaccurate translation in each country, the headline gets embellished a little, for example with comments by local politicians, who are all too pleased to dump it all at the door of the European Union. And with that,” Poc explains, “the myth is out there for good.”

It seemed like such a good story. In April last year, Czech web sites were flooded with reports that EU officials were preparing directives banning hairdressers from wearing heels for safety reasons. In fact, there was no directive. “It was just that, by coincidence, the Congress of the European Association of Employers’ Organisations in Hairdressing was being held in Brussels – that is, employers were getting together with the trade unions. Both parties reached an agreement on improving the working conditions of hairdressers. Here’s where the British tabloids picked up the story and muddied the waters in their own style, and that was the story that got back to the Czech Republic. Shortly afterwards, Pavel Poc got an email from the Czech Association of Hairdressers calling on him to put an end to the absurdity. Although the Czech organisation is a member of the association that concluded the agreement, by the time the tabloids in London were through with it, the members in Prague no longer recognised the connection with their meeting.

British tabloid newspapers spread the news in autumn 2011 that Brussels was prohibiting traditional toys. Under the new regulations, children may not inflate balloons, blow whistles or catch plastic fish by angling for them with magnets.

Wrong. European rules merely protect children from the dangers of inhaling small parts that come with the toys. The packaging must therefore display a warning to parents that children under eight years of age should be supervised. If, however, they let the children blow up balloons at a birthday party, or feel it’s safer to blow them up themselves, it's purely their affair. And one more thing: the regulations on protecting children from inhaling small toy parts have been in place since 1988.

A proper cucumber, which it will henceforth be permitted to sell, shall not have an angle of curvature greater than 20 degrees. That regulation is merely to help make it easier to count how many cucumbers are in one package and to fit in more of them.

Under pressure from greengrocers, disparate national standards were unified, and straighter cucumbers and bananas fall into a different category than those with greater bends. Similar standards set maximum heavy metal levels in foodstuffs. States themselves had already regulated this in their national standards, which were harmonised some time ago.