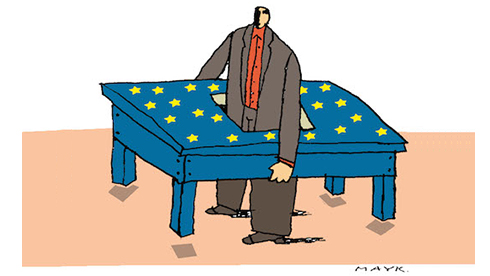 The probable nomination of the President of the European Commission at the European Council in late June is only the first stage in a process that will renew the leadership of European institutions — a political and diplomatic game of musical chairs marked by rituals and secrets that is played out between the capitals of the continent.

How do you come out on top in the grand reshuffle in Brussels? There is no single strategy. This is one conclusion that we can draw from a series of interviews with European civil servants, ambassadors and former ambassadors to Brussels. The second conclusion is that strategy alone is insufficient: “Chance and the luck of the draw also play their role,” explains the former ambassador of one small member state.

Take for example the appointment of José Manuel Barroso as European Commission President in 2004. “At the time, government leaders were tearing their hair out. The United Kingdom had vetoed the Belgian candidate, Guy Verhofstadt, and the British candidate, Chris Patten, was not taken seriously. The leaders looked each other up and down and then they noticed the Portuguese Prime Minister, Mr Barroso. He was not widely known, and thus not controversial. He was a Christian democrat and his country could get by without him. And so he became president of the Commission, without any campaign.”

The appointment of Belgian Herman Van Rompuy to the presidency of the European Council in 2009 was another surprise in the same category. Here too, other potential candidates had fallen short: Tony Blair (too dominant), Jean-Claude Juncker (despised by France), Jan Peter Balkenende (unconvincing). And so it was that the drab Herman Van Rompuy, who had come from nowhere without a strategy, was able to step into the limelight. It was not easy for Belgium to do without him, (only a year earlier he had been appointed to lead his country through a period of extreme political turbulence), but that did not matter. On the same evening, to everyone’s amazement – most especially hers – Catherine Ashton was elected High Representative for Foreign Affairs. The British politician had not even prepared a word of thanks.

“Luck counts”, remarks an experienced European official, “but the appointments are not a lottery. Government leaders are a bit too calculating to leave everything to chance. Even if they do not have all the cards in hand, with good preparation they can hope to make their own luck.”

In advance of the process member states would do well to address the four W’s. Who do they want to put forward, for which jobs and when to stake their claim? The fourth W is for wayward contingency: an awareness that the process is by nature capricious and difficult to predict. The four W’s offer some guidance in the extremely complex process that results in the distribution of roles, but solving a Rubik’s Cube is child’s play in comparison to the puzzle represented by the future of the Brussels court.

This time around, the choice of the new Commission president has been further complicated by the fact that a candidate has been put forward by parliament, the former prime minister of Luxembourg Jean-Claude Juncker. According to parliament, Mr Juncker is the best expression of voters’ wishes. However, this affirmation is not only debatable, it has also put government leaders in a very difficult position. They are supposed to propose a Commission president to be approved by parliament. Now we have a situation where MEPs will throw out anyone who is not Juncker.

Government leaders are increasingly regretting the active (Angela Merkel, Mark Rutte) or passive encouragement they gave to the parliament’s bid to put forward its own candidates for the Commission presidency. “It’s a hornets’ nest,” says Ben Bot [a former Dutch ambassador to the EU]. In the meantime, they have tasked Mr Van Rompuy to find a candidate that could benefit from a consensus (among heads of state and MEPs). The goal is to avoid a bloodbath: [[Brussels is not a shooting gallery where there are always prizes to be won]].

On this basis we can assume that Mr Van Rompuy will attempt to sugarcoat the bitter pill that many will have to swallow by proposing a wider range of designations for prestigious posts (his own succession, the representative for foreign affairs, the presidency of Eurogroup) and a set of policy priorities that the new president of the Commission will have to follow. There will be something for everybody, and a compromise will be found for everyone.

It is a blessing that, as a Belgian politician, Mr Van Rompuy is the right person for the mission that has been assigned to him. Appointments to these senior posts are a balancing act that involves taking into account a number of factors: the political affiliation of candidates, the size of their member states, their geographical position, new and old member states, eurozone or not, man or woman etc. “The trick is to be a missing piece of the puzzle,” remarks a senior EU civil servant. “That means that in the coming weeks, you have to be waiting in the wings and in regular contact with the members of your government.”

Once the Commission President has been designated, the battle will begin for the other portfolios that look after the day-to-day administration of the Union. Here again, all is fair in love and war and virtually no holds are barred. Candidates jump the gun and add injury to insult, while indulging in all kinds of bluffing and barking. It is worth the effort, because the president is only backed by 27 commissioners and not everyone will have the privilege of a useful term in office. The next Commissioner for Enlargement will likely have to sit through a very quite five years. The fisheries portfolio will probably be as empty as the seas, and the Commissioner for Culture and Multilingualism has every interest in actively pursuing a few hobbies.

Regardless of the strategy adopted, time is of the essence. At the end of June, government leaders will once again meet in Brussels and let’s hope that by then, Mr Van Rompuy will have finished his proposal on the posts to be filled. According to an EU civil servant, “the situation cannot be allowed to drag on, otherwise it will be an embarrassment. A month has already gone by since the European elections. We have every right to expect that this interval is sufficient for 28 responsible government leaders and the European Parliament to choose a president for the European Commission. The EU is not the same as Belgium or the Netherlands, where it takes months to form a government!”