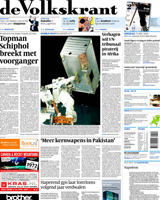 Founded in 1919, De Volkskrant ("The People’s Newspaper") was initially a Roman Catholic workers’ weekly. It went daily in 1921 and was secularised in 1965 when it dropped the subtitle "The Netherlands Catholic Daily”. In our day, De Volkskrant is the preferred reading of young Dutch progressives, though some regret the less earnest tone of certain sections.

Its numerous commentators include several illustrious contemporary writers, such as Ronald Giphart, Abdelkader Benali and Kader Abdollah. At upwards of 260,000 copies, De Volkskrant ranks third among Dutch dailies in terms of circulation, after De Telegraaf and AD.