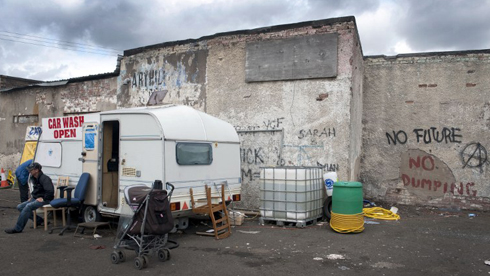 Calton, capital of the disinherited

A raw wind rips through Calton, blowing plastic bags and other rubbish in its path. Boarded-up, disaffected buildings are everywhere in this district. On Stevenson Street, a teenage mother slowly pushes a pram. She enters a newsagent's and comes out a few minutes later holding a packet of cigarettes. Otherwise the street is totally deserted. Only the Calton Bar shows any sign of life. At noon, a handful of clients are already drinking their first pint.

Calton used to be a lively neighbourhood, it was the industrial centre of West Glasgow. Great steel mills with fuming smoke stacks loomed over the working class housing projects. At the People's Palace, which opens out on to Green Park, one can get an idea of what local life was like some fifty years ago. Calton was a typical working-class neighbourhood. The black and white photographs on display show the narrow flats where several families shared the same toilet. No, the inhabitants of Calton never lived in comfort. But, at least at that time, there was plenty of work.

George Robertson, a 67-year old resident of Calton, has vivid memories of that time. "I was 20 years old and my first job was in the steel mill. It was easy to find work. I was a sweeper, a mason and later a metalworker. Now, there's nothing left," he says with a bitter smile, pointing out the remains of a Johnnie Walker distillery, founded in 1887.

The Parkhead Forge, a little further away, was the last in West Glasgow to close. It used to be the city's main employer and exported steel world-wide. It was replaced by a shopping mall, which sells many products made in Asia. Here,the elderly, who occupy all of the benches, are drinking cups of cheap tea. They have not come to shop but to take advantage of the heat. This allows them to cut down on their home heating bills. Fuel poverty is a recognised condition in Great Britain: when someone is paying more than 10% of their income to cover energy costs, it is considered a sign of poverty. Due to poor insulation in homes, the rise in energy prices and low incomes, this category of the population is over-represented in this part of Scotland.

Calton's industrial decline has made it a sort of cesspool for Great Britain. It is a disadvantaged neighbourhood in which nearly one resident out of five is unemployed and in which half of the population depends on benefits. With high unemployment comes poverty, depression, alcohol, drugs, suicide, violence and poor eating habits. "Drug addiction, weight problems, cardiac problems, bronchitis; Calton holds the record in all fields," concludes Robert Jamieson, a neighbourhood doctor for the last 25 years. He is waging a constant battle against these huge health problems. "From a medical point of view, it is undoubtedly the worst-off neighbourhood in the western world," he says.

These health problems linked to extreme poverty result in a fatal mix. Life expectancy is, on average, 53 years for a man, as shown by the public health service's chilling statistics. If Calton were a country, it would rank 168th in global rankings, between Kenya and Congo.

"If there's a spot where poverty is total, this is it. This neighbourhood has the most serious health problems in the entire country and the per household income is the lowest in Great Britain. The children who grow up here have little hope. When they apply for a job, what are the chances of these youths getting it? Most of the time they don't have the proper training or decent clothes for a job interview. Employers see the postal code on the application form and see where they come from. They know they can rule them out," explains Robert Jamieson.

If Calton is the cesspool, The Marie Trust is its lid. It is in this homeless shelter where the city's derelicts, spend the night, after a long day buffeted between the streets and doorways of West Glasgow. There are about 10,000 homeless in the city, with most of them in or around Calton. Recently, The Marie Trust has been more busy than usual. Last year the shelter helped 2,000 homeless, 25% more than the previous year.

The neighbourhood has been in trouble for the past ten years but the recession and the austerity measures taken by the government have aggravated the situation. The government has significantly reduced housing benefits and young job seekers are no longer eligible for unemployment benefits. "I've been working here for fifteen years already," says Martin Johnstone of The Marie Trust, "but these past few years have been the toughest. Recently, we've even had families come here, which is very unusual."

Some measures were taken to breathe new life into the district but the government does not seem to takean interest in Calton. For the past 30 years, from Margaret Thatcher to Tony Blair, Great Britain has had no industrial policy. It allowed factories to relocate to Asia and gave free range to the financial sector with all of the excess and exorbitant bonuses that went with it.

Can Calton still be saved? Robert Jamieson is gloomy. "Do we really want to live in a country in which there are such marked differences?" he wonders "We often think there is no social unrest, no riots, in Great Britain but look at what happened in the streets of London last year. Or what is happening in Greece and in Spain. In the history of Europe, we've often seen what happens when the gap between the affluent and the disadvantaged becomes too great."