Ideas France and the EU 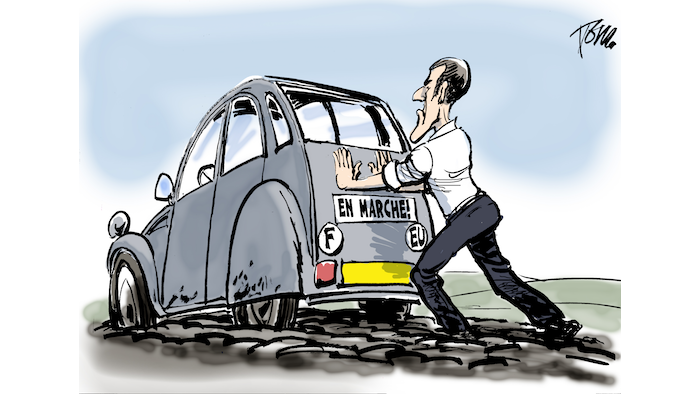 Ideas France and the EU

If the new French president wants to reform the EU, he will have to persuade Berlin to change its course on permanent austerity and to end its deflationary employment policies. A hard, though not impossible, job, says the editor of Alternatives économiques.

Can Emmanuel Macron succeed in reforming the European Union and the Eurozone? The European question was already central to the French Presidential campaign itself: the prospect of a "Frexit" raised by Marine Le Pen cost her dearly in the second round. And, despite recent difficulties, the great majority of the French remain attached to European construction and the euro.

Even so, Macron’s success will depend decisively on his capacity to change economic and social policies in Europe. In truth, with a substantial trade deficit, the recovery of the French economy and fall in unemployment can scarcely come from boosting domestic demand: the key thing here is demand elsewhere in the Eurozone that can spur on activity in France.

Hence, can Macron succeed where Francois Hollande failed (without really trying moreover): soften the imperative of permanently carrying out policies of fiscal austerity and labour market deflation which prevent the Eurozone economy from recovering despite the European Central Bank’s very expansive monetary policy? This is not as improbable as many French people think.

Of course, this depends in the first instance on the attitude of Germany, of its government but also of public opinion there. That’s the reason why Macron’s first trip after assuming office was made to Berlin. The crushing second round defeat of Le Pen was a nice surprise for our neighbours who feared, if not her victory, at least a very tight outcome.

Paradoxically, this wide margin of victory somewhat weakens Macron’s immediate hand, however: had the election been won 55-45, fear of the Front National (FN) would probably have more easily brought the German government to accept substantial changes in Europe than the actual 66-34 outcome that no doubt prompts our neighbours to think there’s no point in over-estimating the unpopularity of austerity in the rest of Europe. This state of mind has already come to play with the warning shots in the German press against likely demands from Macron. The renowned weekly Der Spiegel put on its cover of 12 May the header, Dear Macron, playing on the word ‘dear’, with as sub-header: ‘Emmanuel Macron saves Europe…and Germany foots the bill’. As for the Chancellor, she let it be known straight after his election that she could do nothing to reduce Germany’s current account surplus due, she indicated, to elements outwith her control: the excellence of German companies combined with the excessively accommodating monetary policy of the European Central Bank.

The consequences of Brexit

Despite these reactions, the chances of successfully reforming Europe are greater than one usually thinks if Macron gathers enough momentum around him for this course of action. Given its demographic, economic weight and its geographical position at the heart of an enlarged Europe, Germany incontestably plays the dominant role within the EU. But the balance of power in its favour is not as out of kilter as one thinks. In any case, this is more so now than it was in 2010. First, because the principal problems that Europe has faced these last few years are of a geo-political nature – whether in Ukraine, in North Africa and sub-Saharan Africa (Sahel) with the Islamist threat or with the consequences of the chaos in Syria and Iraq. In this field, Germany is still a dwarf while France is still relatively an international player. With Donald Trump in power in the US, it becomes urgent for Germany to build up a European defence arm.

What’s more, Brexit has considerably weakened the position of German conservatives who, in recent years, were wont to play upon their British colleagues in refusing to make progress on social or fiscal harmonisation within the Union a priority. Among the big European countries our neighbours henceforth have no choice but to reach deals with the French leadership. All the more so because the consistently eurosceptic tilt undertaken by the majority of central and eastern Europe in turn forces Germany to shift back towards the west if it wants to prevent the Union splitting asunder. A European project to which, given their country’s history, German leaders as well as public opinion remain strongly attached.

In a word, and despite the real economic difficulties of France, Macron has from the start a not inconsiderable power at his disposal relative to Germany’s leaders for advancing a reform agenda for the Eurozone geared towards greater support for interventionist activity and increased solidarity. Given the sensitivity of public opinion on such issues, German leaders will only, however, be able to budge on them once the parliamentary elections of 21 September are over. This window of opportunity will really open in the autumn.

Paradoxically, what risks weakening Macron the most in this indispensable struggle to save Europe and the euro by transforming them is French domestic policy. To convince Germany’s leadership into changing Europe he thinks he absolutely must start by doing to France what they ask: ‘reforms’ of the type introduced to Germany at the start of the 2000s by the social democratic Chancellor Gerhard Schröder that liberalised the employment market, removed layers of social protection and lowered labour costs.

However, this is the very same kind of policy that Francois Hollande consistently applied during five years with no less than four important reforms of the labour market, plus €40bn labour cost reductions with the pact of responsibility on top. And that’s why he failed as much at the economic level with no industrial recovery or decline in unemployment to show for his efforts as at the social and political level with endless social conflicts and the disintegration of the socialist party.

By continuing, even speeding up in this direction Macron risks from the very start breaking once more the very modest economic recovery at work and ranging the two-thirds of the French who elected him on May 7 against each other by reawakening social and political tensions. And this, in turn, would weaken his negotiating position towards the German government as well as public opinion in the drive to reform Europe.

This article was originally published in English on Social Europe