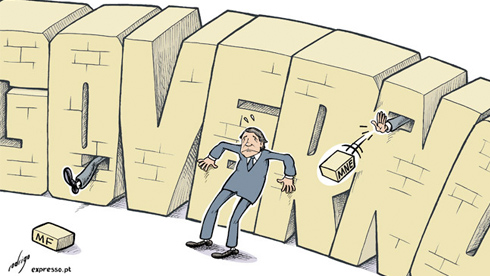 The double resignation of Finance Minister Vitor Gaspar and Foreign Minister Paulo Portas has seriously weakened the government of Pedro Passos Coelho and jeopardised the reforms negotiated with creditors, notes the Portuguese press.

“End of the coalition”, sums up Diário de Notícias on its front page. For the daily “the country has lost its political direction embodied by the government that emerged from the elections of June 5, 2011: a coalition between the Social Democratic Party (PSD, conservative) and the CDS-Popular Party (CDS-PP, rightist)” under Portas. “This majority”, remarks the newspaper —

… was politically capable of ensuring the political stability and firmness needed to bring in such harsh and controversial measures as a generalised increase in taxes, privatisation of more public enterprises and a difficult reform of the State. [With this double resignation] the link between the Electoral Act of two years ago and the origins and legitimacy of the current government and current executive policy has been broken.

“The political crisis in which the government has been entangled since Monday is more pathetic than tragic. And there’s no exit in sight”, writes rival daily Público. Under the headline “Portas corners Passos”, the paper bluntly states —

The government is dead, brought down by its internal contradictions and by the incompetence of a Prime Minister unable to keep it together. […] What we are witnessing is the hara-kiri of a coalition. […] The government fell apart because it was incapable of reaching agreement on the structural reforms that the country needs. […] Europe, which is panicking over the self-destruction of the good student of austerity, will have to accept that a fresh election is the only way forward possible. The Portuguese crisis will have weighty repercussions on the European debate over rescue plans and will strengthen the position of those who want to leave peripheral countries to fend for themselves. The irresponsibility of Passos and Portas will only make the European crisis worse.

“Portugal risks a new bail-out plan”, headlines Jornal de Negócios, which worries about the fallout from the political crisis. “What will happen now? And how can chaos be avoided?” For the paper, the task faced by the country will be a difficult one that can only be addressed “by a political solution” —

Can the mainstream political parties mobilise the Portuguese around a project, if they have none to offer? […] The moderate political parties are failing throughout those countries of the European Union that are undergoing austerity, and this is compromising the European project itself. Since the start of the sovereign debt crisis, more than half of the countries of the union have seen their governments topple. And yet, it is in this political space that solutions must be found; if not, we will witness a resurgence of radical, populist and demagogic politics. Europe itself is facing a serious problem of representation and democratic legitimacy: in an era in which the importance of Foreign Ministers has been overtaken by Finance Ministers, most national policies are not defined by national parliaments but by European institutions, of which only the Parliament is elected. The economic solution must always be European, in a necessary democratic federalism that will move ahead with or against Germany. In Portugal, though, the problem is not just a problem of the leadership of one or another party. It is a problem of the regime itself, which has shown itself to be incapable and on the way out.

Reflecting the worries of the economic elite over a possible dissolution of Parliament, Diário Económico leads with: “The entrepreneurs and the bankers reject early elections”. For the business daily —

Over the next few days, the Portuguese will have to re-live their worst nightmare: the situation that prevailed a little more than two years ago, when the government of José Sócrates requested foreign aid. […] Those who wanted early elections will get what they wished for. It only remains to be seen at what cost to the country. Up until 48 hours ago, Portugal was making a progressive return to the markets – with some help, it is true, but a significant comeback nevertheless. […] In this chaos, who will lend us money, and at what price? Now, with Greece once again about to fail to meet its commitments, and with Germany looking ahead to elections, it is easy to imagine what our lenders, even without the IMF, will ask of us.