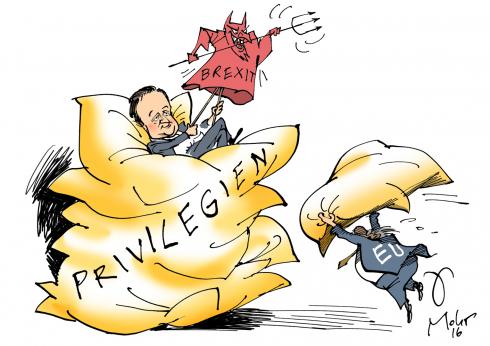 On 2 February David Cameron and European Council president Donald Tusk agreed on a draft settlement that would allow British Prime minister to campaign to keep the UK in the EU in the referendum to be held later this year.

The plan is a response to Cameron’s demands, offering Britain, which already enjoys several opt-outs from EU treaties, a gradual four-year brake on welfare for EU workers, and benefits cuts for the children of EU workers living outside Britain. The deal also states that treaty references to “ever-closer union” are “not an equivalent to the objective of political integration”. It proposes a “red-card” system which “would allow a group of national parliaments making up more than 55 percent of votes on the Council to be able to veto EU legislation”, says the Guardian.

“Government advisers and EU ambassadors gather in Brussels on 5 February for a first discussion on the proposals put forward by Tusk”, reports EUobserver. The deal has to be agreed at an EU summit starting on 18 February.