Press cartoon of the week COP 15 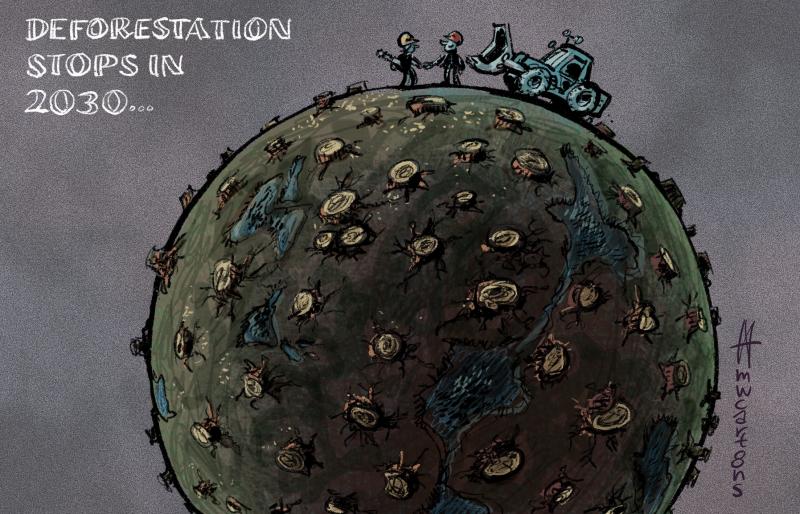 Press cartoon of the week COP 15

An historic break for biodiversity

A historic moment almost went by unnoticed. 19 December 2022 marked the conclusion of intense negotiations held at the UN Biodiversity Conference (COP 15) where thousands of representatives came together to discuss nature conservation in light of climate change. The gathering, which was organised by China and Canada and held in Montréal, was supposed to take place in October 2020, but due to the Covid-19 pandemic, it was repeatedly postponed.

Halfway through the negotiations, it was unsure what the outcome of COP 15 would be, as talks were being undermined by deep-seated disagreements pointing towards a disappointing result at the very least. However, in an unexpected turn of events, the 200 participatory countries managed to reach an agreement. The document will, amongst others, aim to protect 30 percent of the planet’s land- and sea surface and restore 30 percent of degraded terrestrial-, coastal-, marine- and inland water ecosystems. It also sets out a number of economic measures to be taken, which provision was the source of many tensions at COP27. Wealthier countries have, for example, committed themselves to forwarding $30 billion in funding towards protecting biodiversity until the end of the century.

Although the agreement has received global praise for its ambitious goals, it has nevertheless elicited negative feedback, especially from several countries in the Global South who are sceptical of the purported economic measures. There are also reservations regarding the absence of a legally binding mechanism, as a result of which contributions from signatory countries’ are made voluntary. Furthermore, some countries are dissatisfied about the irregularities surrounding the adoption of the final text. It is claimed that the required consensus was not obtained before final approval, which irregularity could mean the end of the agreement as a whole. A moment that will certainly go down in history, but which could go out just as quickly.