Report Debates Digital | Croatia
A park in Zagreb in times of coronavirus. 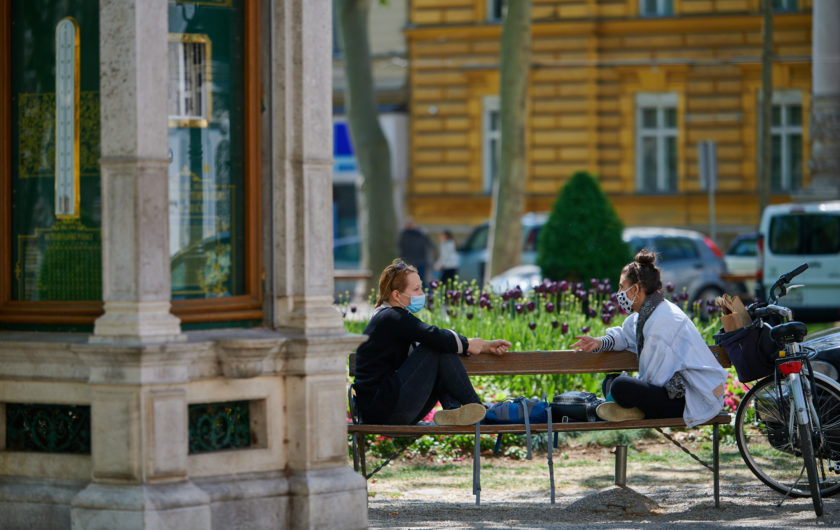 The virus, the earthquake and the bio-economy of tourism

In Croatia, an allegedly independent group of experts have pulled the strings in the handling of the coronavirus pandemic. But this crisis management has in fact been deeply political, writes journalist and novelist Slavenka Drakulić. Dependent on tourism, EU's youngest member state plays a risky game where political power and economy stand against the lives of the most vulnerable. In the end the future of democracy could be at stake.

A park in Zagreb in times of coronavirus.

Most of us have seen one of the popular Covid-19 memes that says “Can we reset 2020? It has a virus!” – or something along those lines. Croatia would, indeed, badly need such a reset. The country did not have much luck this year, haunted by several plagues, one after the other. First came the presidency of the Council of the European Union, which Croatia held from January to June. Then Corona hit. And, in the middle of all that, a major earthquake shook Zagreb, the country's capital. Then followed the risky gambling with early parliamentary elections. And, finally, the challenges of (collapsing) tourism.

The Croatian presidency of the EU was a big challenge, with historical tasks such as Brexit and the immigration crisis on the Union's south-eastern borders on the agenda. But Croatia's over-sized ambitions of contributing effective solutions and the illusion of its power and importance ended in June, without any memorable result. It would be easy to blame the pandemic for the meagre outcome, but as critics put it, the positioning of Croatia was wrong from the start. Instead of choosing to take on a leading role in the region and help Serbia, Montenegro, Albania and North Macedonia with their problems and further their negotiations with the EU the government wanted to be on the equal footing with the big European players. The Croatian presidency left no mark on EU politics.

When the Croatian government declared the coronavirus pandemic on 11 March, it turned out to be the start of an exercise in returning to a police state. An expert body of allegedly politically non-allied scientists and managers of health institutions, which curiously included the minister of the interior from the governing party HDZ, was formed to manage the pandemic. Bypassing the parliament, this group issued orders for a lockdown and decided about everything else related to the coronavirus, from the closing down of schools and tram lines, to the isolation of groups and individuals, to the compulsory wearing of masks in shops and public transport.

Interestingly, citizens obeyed the new rules without protest, regardless of their questionable legitimacy and anti-democratic character. Not even the opposition opposed! On the one hand, fear of the virus united them all. But on the other, this extraordinary obedience was prepared by Croatia's authoritarian past as part of Yugoslavia. When in trouble, people not only flock together, but also resort to the type of political leadership they know and recognise.

Perhaps this is best illustrated by the habitual willingness to delegate the responsibility for decisions to a higher authority – which used to be the Communist Party – because they are supposed to "know better". It is as if this legacy of the communist system still prevents citizens to believe in their own rights or even to question any decisions. The experience of democracy has in this context just been one of a new form for the old way of party-dominant governing. It didn't take long for people in the new states formed after the fall of Yugoslavia to understand that party membership still is the shortcut to power and money.

Not even the earthquake in Zagreb on 22 March – with 5.5 on the Richter scale it was the strongest since 1880 – could shake the Croats enough to get them out of the Corona slumber they had fallen in. Some 25 000 buildings were damaged, about 2000 of them had to be evacuated. Many schools, hospitals, museums and other cultural institutions were affected and also people were injured. The city centre, with the historic old town, was hit the most. This natural disaster was followed by confusion and scandals surrounding the financing of the reconstruction, revealing severe manipulation and suspected embezzlement by the city administration. However, all this was overshadowed by the news and stories about the all-dominating coronavirus.

If citizens at first accepted the so-called expert body, believing that their task was to save human lives, they soon came to understand that there was a strong political aspect to it. It became apparent that this group functions as an extension of HDZ, the ruling party. Fear and control over the pandemic – meaning a comparatively low number of sick and dead – became the most important building block of securing the early parliamentary elections. The ruling party wanted to quickly profit from the virus by appropriating the good image of the expert body and the results of the first lockdown. Well aware that the lockdown would not be sustainable in the long run – not least because of the start of the tourist season – they scheduled the elections for 5 July. Prime minister Andrej Plenković decided to use the post-corona and pre-tourism moment. Part of the motivation for this time slot was no doubt the fear of tourists spreading virus once the borders would be open.

The biggest economic crisis ever

However, Plenković's second and even bigger fear was probably another, namely that tourism, the most profitable "product" of the country, contributing around 20 per cent of the GDP, would collapse. This autumn, Croatia might face its biggest economic crisis ever – clearly not at good time for elections. The calculation to save the budget by opening borders and loosening Corona-prompted restrictions in order to get as many tourist as possible is a risky one. My colleague Viktor Ivančić from the former weekly Feral Tribune describes it as an example of the politics of "sustainable bio-economy" applied by the Croatian government.

According to Ivančić's satirical definition, this "sustainable bio-economy" is based on the premise that it is responsible and rational to allow the demise of one group of people from Covid-19, if it prevents the rest of the population from starving to death. In case you think this is a specifically Croatian calculation, just consider the similar approach in Sweden, where the wellbeing of the majority is weighed against the suffering of the most vulnerable. Other countries with popular tourist destinations, such as Spain, Greece or Italy, are doing exactly the same: the strategy to save the budget by lifting restrictions to allow for the influx of tourists is based on the toleration of a certain number of people dying. Someone has yet to specify how high the acceptable number of deaths is in this morbid equation.

The calculation with the timing of the election proved right, although the ballot coincided with an increasing number of infections. The prime minister and his party won. This time the general impression is that the new-old prime minister is steering HDZ towards the centre, away from the radical right that has been dominating in the past. Plenković's and HDZ's luck was that Croatia is a small and not very important country, living and dying at the edge of the EU while the big countries barely notice what is happening in the periphery...

More : There is no dodging the demographic crisis

Be that as it may, the new government will now have to start tackling real problems, from unemployment to legal and economic reforms, to the growing number of refugees and immigrants pressing on Croatia's border with Bosnia and Herzegovina. And despite that Croatia is one of the biggest "winners" of the EU coronavirus recovery package negotiated in July, they will have to do it with a rather scarce budget.

The virus is changing not only our personal and social habits but also our economic situation. And it changes our political behaviour. These changes will decide the near future, not only in Croatia, but in the EU as well. The pandemic has revealed how fragile our existence actually is, both our lives and our way of life. Faced with a major catastrophe, we see the institutions we built to protect ourselves falling apart. The fear for our lives risks undermining further the already fragile foundations of our democracy.