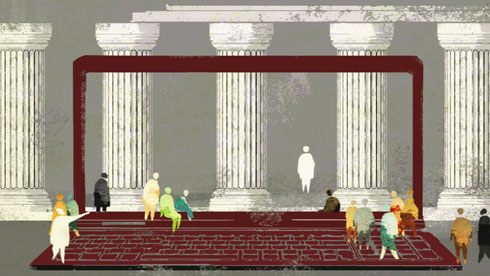 Cyber-democracy is just the first step

Responding to political crisis, a chorus of voices, such as Italy’s Five Star Movement, are calling for a transition to the direct participation that the Internet has made possible. However, the two systems should complement, rather than compete against each other.

The Italian political debate seems polarised on the issue of democracy: on one side are those who, like the Five Star Movement, propose a direct cyber-democracy, restricting the parliamentarians to the role of mere executives. On the other stand the defenders of representative democracy as we have known it these last decades in Italy, which, despite its flaws, they believe to be the best system possible.

However, we need to go beyond this confrontation and clear new avenues for reflection: in fact, the most promising prospects for the future of democracy reside elsewhere. But before we turn to the future, we should re-examine some factors that may put the current situation into perspective.

The first: for years now, political parties have been the least popular institution in Italy, getting approval ratings that, according to the polls, regularly dip below 10 per cent. Those figures are disastrous. They don’t imply that the Italians reject the party system as such, simply that they have scant regard for the parties in their present form. Those parties have not yet found the right path out of this crisis of legitimacy, which has been exacerbated by a rise in voter abstenteeism.

Second: the parties still enjoy colossal power and a true monopoly on public life, just as mistrust of them has reached new heights and they no longer have the legitimacy that comes from having many followers.

The cost of globalisation

Third and final factor: globalisation, which from the early 1970s has increasingly hampered the ability of democracy to oversee the economy while, apart from anything else, causing a general rise in inequality.

In short, it is no surprise that many feel they are living in a murky political system in which their voices are heard only while the election campaigns are underway, and then only within the boundaries of a political agenda that they have no influence over. It’s a democracy that we can call “weak”.

In the decades in which democracy has grown ever feebler, something else involving vast numbers of citizens has been on the march – namely the spread of the digital revolution, which initially concerned only the developed world, and then went out to the rest of the planet.

More and more of us, armed with computers, have begun to use the Internet to communicate, to organise, to express our opinions, to learn new things and so much more. They are now millions who have learned – reacting, if a little confusingly, to the weakness of democracy – to inquire independently. They wish to participate and they demand transparency. As is clear from all the forums throughout Europe, their activities online are an upsurge from below that is not immune to superficiality or paranoia, but which bears a healthy sense of criticism and a desire to get back to the sources and to rethink fundamental questions for themselves. They are easy to mock, these arguments, but, we should remember, they are not so very different from the arguments that gave birth to modernity, starting with the English revolution.

But while more and more people have been getting together on the web to inquire, discuss and organise themselves, the political parties have been ignoring – and, for a good many of them, continuing to ignore – the transformation that is taking place in millions of potential voters (especially younger ones).

On the other hand, the parties that have succeeded each other in office have never felt that introducing new tools of direct democracy into institutions was ever a priority. In other words, at a time when the Internet has been playing a greater and greater political role in people’s lives, its influence on traditional politics has remained insignificant.

This inertia among the parties has allowed – at first in narrow circles of people, then in broader swathes of the population – interest in forms of direct e-democracy to take root. The party system, considered to be murky, self-centred and often corrupt, has come to oppose direct democracy, which is felt to be intrinsically superior to representative democracy.

There are nonetheless plenty of criticisms that can be levelled at cyber-democracy, as it applies to groups of important people and to an entire country as well. In criticising – often justifiably –the Italian political system it should not be forgotten in particular that political activity is an essential democratic art, as Bernard Crick wrote in 1963 in a now classic book, In Defence of Politics: an art based on virtues such as prudence, conciliation, compromise and adaptability.

The second criticism is that there is a difference between giving an opinion in a poll and voting: democracy calls for careful deliberation, a rigorous evaluation of pros and cons, the ability to give meaning and coherence to political roadmaps. Finally, the third pitfall is the digital divide: only one out of every two Italians is connected to the Internet. These are usually socially disadvantaged people, like the elderly and the families of unskilled workers, who must not be excluded.

It might be better, then, to look at how we can encourage representative democracy to evolve towards more participatory forms, towards what we might call, in the words of Stefano Rodotà, the “continuous democracy”. Not only is there no shortage of proposals for this, but some have already been tested successfully. In addition to the ongoing dialogue between voters and elected officials, these range from the French-style public debate, consultations on participatory budgeting (the experience of Porto Alegre in Brazil is well-known), the deliberative polling proposed by James Fishkin, referendums without quora, and the obligation to discuss in parliament bills tabled by popular initiative. Or even, at the European level, the citizens’ initiative, a novelty introduced by the Lisbon Treaty.

Parties should make these proposals their own and apply them to themselves first, before taking them to the local, national and European levels. In other words, it is neither direct democracy nor the defence of the status quo that will allow us to emerge from the current crisis, but an evolution – led by parties that have been thoroughly overhauled (or completely new parties) – of representative democracy towards forms that are more participatory: perhaps there is someone on the Italian scene up to the challenge?