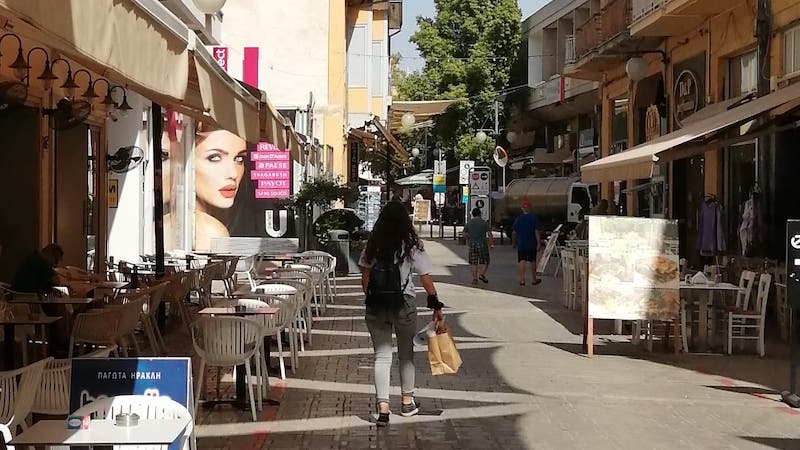 Coronavirus, one more factor of division

The lockdown and travel restrictions imposed since the spring have exacerbated the divide between the Greek and Turkish communities and further help up reunification talks. They are also weighing on the election of the next leader of the self-proclaimed "Turkish Republic" of the North, on 11 October.

At the beginning of this summer-like October, an unusual silence fills Ledra Street, Nicosia’s usually crowded main shopping drag. Amateur musicians have deserted the place. The neighbourhood's ice cream parlour, frequented by the elderly, no longer welcomes as many customers. It is as if the coronavirus has finally got the better of this historic street.

It all started at the end of February, when the government of the Republic of Cyprus unilaterally decided to stop the spread of the virus by closing four of the eight checkpoints with the Turkish-occupied northern part of the island (TRNC). The provision is still in force today. The Ledra pedestrian crossing point is closed to Greek Cypriots and Turkish Cypriots wishing to travel to either side. Barriers have been erected for the first time since the opening of the checkpoint in 2008. In Nicosia, the atmosphere of division is increasingly palpable.

The two communities have not been so far apart since crossings between the two sides were made easier in 2003. Several checkpoints have been scattered along the UN-controlled "green line". This demilitarised zone hermetically separates the island in two, making Nicosia the last divided capital of the European Union.

For Ediz Ozmindik, a Turkish Cypriot student at the University of Cyprus and part-time supermarket cashier in the southern part of the island, the closure of Ledra is a real setback. "With my Greek Cypriot friends we used to go for a drink in a bar in the north on Ledra Street. Because of the coronavirus I lost contact with several of them because they can no longer cross the checkpoint," he laments in perfect Greek.

Collateral victims of the closure of the checkpoints, Turkish Cypriot workers working in the south have denounced the quarantine measures of the northern authorities, arguing that the South was opening crossing points while the North was closing them. "During the three months of confinement, I had to live on just €1,000 since I didn't have access to my bank account in the South because I wasn't allowed to go there," sighs Ediz.

The 23-year-old student also confesses that carrying out a Covid test in the north was "real torture" for him, caught between the endless queues and the authorities who delayed the results until the following day to dissuade Turkish Cypriot workers from going to the Republic of Cyprus.
Within this pandemic context, the UN and the United Nations Force in Cyprus (UNFICYP) did not hide their concerns. The UN secretary general's reports called on the president of the Republic of Cyprus, Nikos Anastasiades, and Turkish Cypriot leader Mustafa Akinci to respond in a coordinated manner to this global crisis. It was only in June, and after five months of crisis, that the two leaders agreed to lift some restrictions around the capital's three other checkpoints.

Still in force today, this lifting mainly concerns workers, students and the land-locked. With his status as a student and a worker at the same time, Ediz can now get tested free of charge at the Agios Dometio checkpoint in Nicosia suburbs, present a negative test that is two weeks old and cross the checkpoint in order to continue his studies.

As of 21 June 2020, the Republic of Cyprus has allowed Greek Cypriots, Turkish Cypriots and permanent legal residents of the Republic to cross the two sides on condition that they present a negative coronavirus test dating back at least 72 hours. While the Greek Cypriots have seen an improvement, the price of the PCR test – at €80 – is still unaffordable for many citizens used to visiting the North on a daily basis.

Any decision to restrict movement on the island is politically sensitive because of the territorial division between its Greek and Turkish populations. It dates back to Turkey's invasion of the island in 1974 after a brief Greek-inspired coup d'état. The "Turkish Republic of Northern Cyprus" ("TRNC") proclaimed itself in 1983 and is still not recognised by the international community, with the exception of Turkey.

In the circles of peace activists, the announcement of the closure of the checkpoints at the end of February aroused much bitterness and frustration. About 300 demonstrators gathered at the Ledra Street crossing points, where tensions erupted between the security forces and the supporters of reunification. "We do not underestimate the virus but we thought that in times of crisis, and if people really want to contribute to the reunification effort, both sides should face this crisis together and not unilaterally," says Andromachi Sophocleous, an activist for the joint platform "Unite Cyprus Now" and a political analyst.

For her, the creation of a joint Technical Health Committee, composed of Greek Cypriot and Turkish Cypriot epidemiologists, to exchange data and assist cooperation between the two sides during the coronavirus crisis, is not a "sufficient indication" from a country that aspires to reunification. She denounces, in particular, the lack of coordination between the two parties.

Indeed, while the coronavirus was gradually disappearing from the island, the TRNC announced the opening of its airports to flights from Turkey, then considered the epicentre of the contagion in the region. Meanwhile the Republic of Cyprus was preparing for the tourist season and to welcome visitors from countries where Covid-19 cases were counted in thousands.

"The issue of restrictions takes us back years. Checkpoints are not on the respective agendas of Nikos Anastasiades and Mustafa Akinci. They have no will to solve this problem. The Republic of Cyprus does not stop at Ledra", says Sophocleous. For her, the real threat is now that of partition, that is to say, two separate states side by side, which would legitimise the invasion and occupation by Turkey. She nevertheless hopes that the European Union will give a boost to the resumption of talks on the Cyprus issue.

For its part, the UN Security Council on 27 July called for the opening of all crossing points, a return to normalcy and to the situation before 29 February 2020 as soon as possible. With regard to the restrictions on movement imposed to prevent the spread of Covid-19, it called for the parties to coordinate so as not to exceed what is strictly necessary to protect public health.

For Nikolaos Stelya, a journalist with the Cypriot daily Kathimerini and an academic, "the pandemic has radically influenced the Cyprus issue. There is now no longer any interaction between Greek Cypriots and Turkish Cypriots. Both sides have not been up to the task in facing this crisis. We cannot blame either side in particular. They are both to blame for their unwillingness to find a solution at the checkpoints".

Mustafa Akinci, who is somewhat pro-reunification and who advocates more independence from Turkey, had been attacked by his executive and prime minister Ersin Tatar, who is in favour of the partition of the island, for having accepted help from the Republic of Cyprus during the crisis. His "government" was also late in sharing a report with the joint Technical Health Committee on epidemiological data from the north, which increased scepticism on the Greek side.

There is no doubt that the pandemic is at the centre of a political battle and has become one of the issues at stake in the "presidential election" in the TRNC, which is due to be held on 11 October, after having been postponed due to coronavirus. The election’s outcome is uncertain: polls conducted in recent days have predicted both Akinci and Tatar as winners.

"The pandemic has become a propaganda tool for supporters of no-solution of the Cyprus issue and partition. That is, for the conservatives, and especially candidate Ersin Tatar, who is supported by Turkey. During the coronavirus crisis, the right-wing believed that with the help of the motherland, the TRNC could emerge from the coronavirus crisis," says Nikolaos Stelya. "If there is one candidate to come out of this situation, it will be Mustafa Akinci, but there are other problems, such as the re-opening of the ghost town of Varosha by Turkey in contravention of UN resolutions, and Turkish incursions into the Cypriot Exclusive Economic Zone", he adds.

With the coronavirus crisis, the division of the island looms greater than ever. As the Covid-19 pandemic disrupts movement in Europe and across the world, in Cyprus a border seems to be taking shape again.

The vote on 11 October will therefore be decisive for the future of the island. Observers talk of a resumption of talks for a settlement of the Cyprus issue after the elections in the North. But the negotiations have been at a standstill for three years now because of Turkish incursions into Cyprus’ Exclusive Economic Zone. Apart from the pandemic, another factor is influencing the resumption of the negotiations: the announcement on 6 October by Turkish president Recep Tayyp Erdoğan and Ersin Tatar that the Varosha coastline will be opened up against UN resolutions.

More : Cyprus: Between a rock and a hard place
Categories
Covid-19DiplomacyEnlargementEurope abroadCyprus