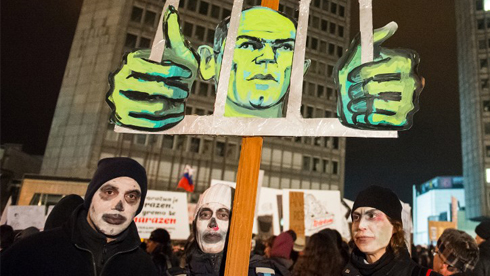 Democracy or kleptocracy: What’s it to be?

The divorce between the political class and the Slovenian population is expanding at the same rate as the revelations about corruption. Now that the head of government himself has been caught up in the scandals, Slovenian society stands at a crossroads.

Protestors call for the resignation of Prime Minister Janez Janša in Ljubljana, on January 11, 2013

We have to admit it: Slovenian society is schizophrenic and sick.

On one side of the split is a dramatic conflict within the ruling coalition, and in Slovenian politics in general, in which the actors think only of clinging onto their positions and avoiding getting swept up and tossed into the rubbish bin of history by an angry populace. On the other side of the split is the majority of the citizenry insurrection against the government.

It can fairly be asked, who represents reality in the present circumstances? Is it the political elite, which behaves like a bull in a china shop and keeps corrupting Slovenian society, or is it the protesters who are calling for politicians to act in accordance with ethical and moral standards?

Following the most recent event, which saw several thousand people gather in Ljubljana on January 12, it's clear that [the protest movement] will keep at it until the political elite hear the cries of discontent and relinquish power.

Tired of the lies

This is the message that is being sent to them in many ways: by placards, masks, and by shouts of “Enough!” The people are tired of lies, of the kleptocracy, of insults and humiliations. The spirit of the challenge is best embodied by the slogan: “Lie, steal, rule - that's democracy in Slovenia."

Those who expected that Christmas and the New Year would put a brake on the [protest movement] were wrong. The report of the Parliamentary Committee on the fight against corruption gave new life to the wave of protest by disclosing undeclared transactions in the bank accounts and assets of Janez Janša, Prime Minister and leader of the ruling party [ the Slovenian Democratic Party, SDS, Liberal], and Zoran Janković, leader of the main opposition party [Positive Slovenia, PS, centre left].

Slovenian society is at the crossroads of becoming a true democracy - or remaining a kleptocracy. The days, weeks and months ahead will be crucial. It is time that the voice of the citizens was heard. And taken into account.

Janša’s departure: not the end of the world

"MPs prefer to avoid new elections," reports Slovenian daily Delo. It explains that although they are calling for Prime Minister Janez Janša to resign, the members of his government coalition fear this will aggravate the political crisis and would prefer a simple replacement.

But Janša refuses to accept this, according to philosopher Alenka Zupančič writing in another daily, Dnevnik. "I am the State, that is Janez Janša's message. If you want what is best for the State, love me. All the rest is nothing more than attacks on our sovereignty and leads to our decline," she says, adding that

Janša's reaction sounds like a broken record. [...] No one had as yet so usurped the State and taken its citizens as hostages, using them to blackmail the political sphere and his own coalition. Just as the world did not end on December 21, it won't either if Janša leaves. On the contrary, it's possible that we might obtain a government that will know how to use the report issued by the International Monetary Fund last October to say: "OK, we were wrong. We underestimated the impact of austerity measures on growth. We should have done things otherwise; we should not have been in such a hurry to enact fiscal consolidation."