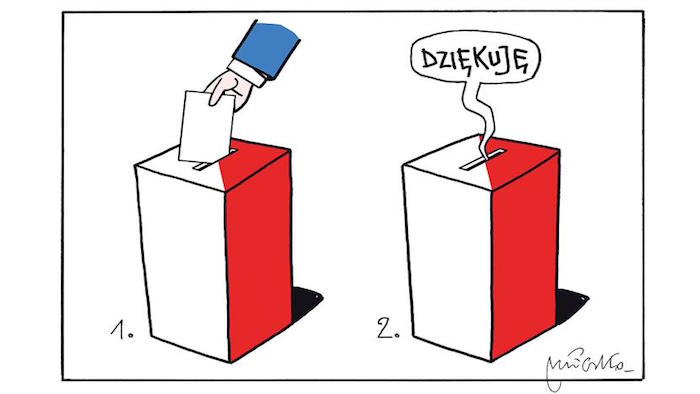 Democracy put to the test

“Reactionary”, “bigoted”, “authoritarian”: the conservative party Law and Justice, which comfortably won the elections on 25 October, has not had a very good press. But Poland is unlikely to down the route of Hungary, but should remain solidly anchored in Europe.

Jarosław Kaczyński’s Law and Justice party (PiS, conservative) has just won a huge victory at the legislative elections on 25 October. Everything points to the party forming a government alone – an unprecedented situation in a country where proportional representation has sometimes led to some very exotic coalitions. The left has been completely swept aside and will have no MP. Faced with this situation, a number of commentators are talking of a fragilisation of Polish democracy. All the more so given the the PiS is presented as an authoritarian nationalist group.

Is it really so? We certainly are not dealing with a classic right-wing party in the western sense of the term. Is its programme very conservative? Yes, on the question of morals. When he was Prime Minister, between 2005 and 2007, Kaczyński opposed teachers from “displaying” their sexual orientation. In addition, one section of the PiS’s MPs wanted to write a ban on abortion into the Constitution. But the law limiting the right to voluntary termination of pregnancy to extreme cases has been in place since 1993, and liberals on the left have been in power during this time without altering it. This can be explained by the presence of the Catholic church in Poland, whose positions are respected by all parties – even if the PiS boasts privileged links to the clergy. The PiS also considers religion, language and tradition to be the pillars of the national values they hold so dear.

Is it nationalist? This label needs to be qualified. Was former President of France Nicolas Sarkozy called a nationalist for creating the Ministry of Immigration and National Identity? Law and Justice has admittedly exploited the migrant crisis to attack the liberals of Civic Platform (labour party; the former government) during the campaign. But there again, it is more a case of specific national politics rather than an ideological split – all Polish political parties fear a massive influx of migrants in an ethnically homogenous country: 99.7% of the population was of Polish nationality in 2014, according to Eurostat, but this figure does not take into account a large number of Ukrainian immigrants, often there illegally or “temporarily”. Nevertheless, the PiS is a pragmatic party and will certainly be made to take in refugees if it does not want to isolate itself in the European arena. In addition, Kaczyński and his voters do not consider themselves to be nationalist and reject claims to the contrary. The overtly nationalist parties have not breached 2% of the vote for ten years.

The PiS is also seen as one of Europe's eurosceptic, even europhobic parties. Here again, there needs to be some nuance regarding their attitude to European integration. Kaczyński is concerned that Poland is losing all influence over its domestic politics when it comes to morals. That is why he was opposed to the European Convention on the Prevention of Domestic Violence and to sex education classes at school that, he claims, the EU wanted to impose.

Kaczyński is equally not in favour of a quick entry into the eurozone. Nevertheless, once again it seems like the problem is not ideological, since the Civic Platform did not make the necessary preparations for Poland to replace the zloty with the euro. Furthermore, the late President Lech Kaczyński, Jarosław's twin brother, was very much in favour of the creation of a European army. He also signed the Lisbon Treaty, at a time when a member of the Civil Platform came up with the slogan "it's Nice or death"! (referring to the Nice Treaty, which gave Poland a greater voice in the European Council than the European Constitution would have done)

The PiS is therefore far removed from the europhobic UK Independence Party (UKIP) or even the British Conservative Party, which has proposed a referendum on the European future of the UK. Jarosław Kaczyński is well aware of the importance of European funds for Poland's development and of the Common Security and Defence Policy (CSDP), given the crisis in Ukraine.

Western media outlets have therefore simplified the situation by labelling the PiS a nationalist and eurosceptic party. That is probably due to the fact that they have been influenced by the Polish liberal and left-wing press – seen as more acceptable – which likes to repeat that Law and Justice is extremist and represents a danger for democracy. But it is important to stress that the right-wing press used to talk of democracy under threat when the Civic Platform was in power.

Nevertheless, the reforms planned by the PiS are not in any way anti-democratic. It is normal for the party to have presented certain very radical ideas over the course of the campaign to mark it out and attract voters. But the years 2005-2007, when the PiS was at the centre of a government coalition, have shown that we do not need to fear an drift to authoritarianism like Viktor Orbán's Hungary. On the contrary, when the Kaczyński brothers understood that they could not continue to govern with extremist parties, they called new elections and let their rivals take power. And their economic policies were much more liberal (a lowering of social security payments) than those of the left (a VAT increase) in spite of a more interventionist rhetoric.

Polish democracy is therefore not in danger but has been put to the test by an historic political domination in parliament. It is a challenge for the media, for the exhausted outgoing majority and for civil society, which all have to play the role of opposition. But the current constellation is simply the result of an alternating game that proves democracy is Poland is functioning well.