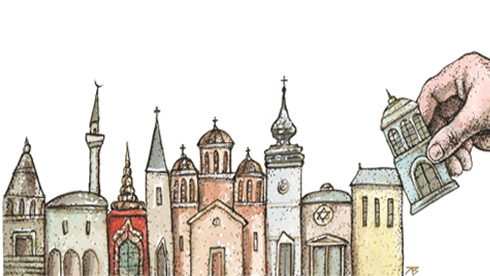 The EU is preparing guidelines for European diplomats on how to advance religious freedom and the separation of church and state when working abroad. The mission has its share of pitfalls, since the EU itself is divided and ambiguous when it comes to the subject.

Not many EU countries are neutral when it comes to religion. The Queen of England is head of the Anglican Church, the Dutch euro coins bear the text “God be with us”, and the European Court of Human Rights does not object to crucifixes in Italian public schools. Despite much tolerance for the strong links between the Church and member states, EU diplomats visiting foreign countries will soon have to observe a set of guidelines aimed at promoting religiously neutral government that safeguards religious freedoms. Various participants concluded yesterday that a debate on religious freedom in the European Parliament was an exercise in sanctimony.

“We must first define a European identity before trying to export it”, said Lorenzo Zucca, a legal expert connected to King’s College in London, who was invited to the debate. “Everyone knows how difficult it is to talk about religion at a European level.” The current uproar concerning the Hungarian government, which has imposed Roman Catholicism on public institutions, and the emotional debate about the reference to the ‘Jewish–Christian tradition’ of Europe in the rejected European constitution, are prime examples of this.

Robert-Jan Uhl, human rights adviser of the Organisation for Security and Co-operation in Europe, cautions the EU to adopt a very practical approach. “This concerns fundamental rights, for example, that people may import and distribute religious literature and that prisoners receive meals that comply with their religious beliefs.” He says that vegetarian meals were initially not available to Buddhist prisoners in Poland. “The case was referred to the European Court of Human Rights. The court ruled that their religious dietary practices must be respected.”

The right to not believe

Mr Uhl points out another problem whereby many nations are only prepared to protect a minority religion if people are actually prepared to officially register as believers. “That is absurd. You should be able to worship with whoever you like, without having to register in advance. The EU should criticise this practice.”

Two Dutch MEPs lobbied hard for the guidelines, which are expected to be passed by the EU ministers in June. Peter van Dalen (Christian Union) and Dennis de Jong (Socialist Party) compiled the draft, which is currently being elaborated by the European External Action Service.

“The right to change religion or become non-religious is also crucial. And while this would undoubtedly lead to exclusion in certain countries, freedom of religious belief applies just as well to the right to not believe.”

EU will also look at itself

Jean-Bernard Bolvin of the European External Action Service, recognises that religious wrongdoing also happens within Europe. The European Commission has almost no authority in this area, and rulings by the European Court of Human Rights often follow extensive periods of deliberation before handing down rulings that are not always observed. “This in no way alters the fact, however, that we could indeed devote attention to the matter within the context of our foreign policy. It is certainly not our intention to argue that only a secular state is entirely moral. However, if certain sections of the population are discriminated or people are hanged for their beliefs, then it is good for people to know what sorts of legal objections they might raise.” He also thinks that debate on the subject would prove effective within the European Union. “This would prompt the EU nations to also look more closely at themselves,” he argues.