Ideas After the UK referendum 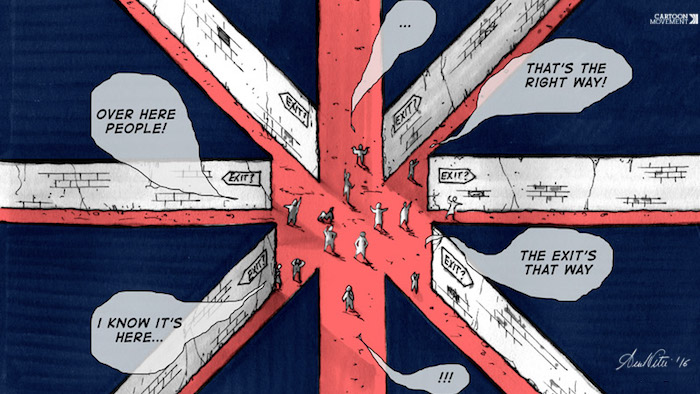 Ideas After the UK referendum

With their xenophobic rhetoric and their lack of pragmatism, the leaders of the Leave campaign, in particular former London Mayor Boris Johnson, have awakened forces that are spiralling out of control.

Almost a week has now passed since the UK voted to leave the European Union. And during this time events in Westminster have oscillated between tragedy and farce, as heads roll, Remainers turn upon each other and Leavers sheepishly retract their promises of extra cash, stronger trade and restrictions to immigration. It seems increasingly clear the electorate has fallen victim to what the Daily Mirror’s Brian Reade has called “the biggest con in the history of British voting”, spearheaded by opportunists and ideologues with no serious plans for what to do now.

Economic crisis looms, and newspapers have leapt on stories of Leave voters now regretting their choice in the cold light of day. The liberal left has gleefully relayed news of a former Sun editor’s “buyer’s remorse” days after urging readers to leave. A friend’s father, though proud of his decision to vote Leave, is nevertheless applying for Irish citizenship.

Supporters of EU membership can draw some comfort from the testimonies of regretful Leavers as the UK’s economic woes deepen. But it is likely millions more will continue to believe the hardship worth it for a chance to reduce immigration. It is this hard core of angry voters that is so terrifying. Boris Johnson has scurrilously stoked the fire of anti-immigration sentiment, and promised Sun readers they would see immigration fall if they voted to leave.

Yet Johnson’s recent Brexit manifesto, published in his weekly Telegraph column, indicates his real priorities lie elsewhere. He wants to reassure “our neighbours, brothers and sisters who did what they passionately believe was right” that they will retain their right to free movement and access to the EU single market. Like so much of what Johnson writes, ‘our’ could be replaced with ‘my’ at no cost to comprehension. His neighbours live in a particularly well-heeled part of Islington, a Remain heartland, while his brother and sister are part of the same political-journalistic elite, but campaigned strongly against Brexit. His promise of a fabled ‘point-based system’ for immigration, casually thrown in towards the end of his article, has all the half-heartedness of a man who knows the EU will never agree to it —

Yes, the Government will be able to take back democratic control of immigration policy, with a balanced and humane points-based system to suit the needs of business and industry.

Johnson, for all his xenophobic pandering to the press, seems largely uncommitted to the key plank of his campaign. His cynicism means treating voters concerned about immigration as a force to be mobilised and then ignored. Johnson has form here. He has been happy to raise the spectre of 3,000-4,000 Islamist extremists heading for Britain, bravely insulting them before claiming ““I am not scared of Jihadi revenge attacks.” Given he invented the threat, his courage is not exactly impressive. As a key figure in the Conservative party’s smear campaign against Labour mayoral candidate Sadiq Khan, he used his Telegraph column to hint that Khan’s immigrant background made him untrustworthy —

In Islam and the Labour Party there is a struggle going on, and in both cases Khan – whatever his real views – is pandering to the extremists. I don’t want him running our capital.

Johnson is a master of dog-whistle politics. So he can easily brush aside accusations of inciting anti-immigrant feeling, just as he has scrupulously avoided sharing a platform with openly xenophobic Ukip leader Nigel Farage. But at the same time he has benefitted from the surge in anti-immigrant feeling that propelled his Leave campaign over the finish line.

The danger is Johnson has awakened forces he won’t be able to control. For fear of immigration seems to operate on a mythological logic that rejects pragmatic political responses. And for all Johnson’s failings, he has signalled he would approach EU negotiations – and particularly the question of immigration – as a pragmatist. But he has encouraged the re-emergence of a xenophobic rhetoric that implies immigrants are by definition a burden. According to this logic, no immigration rate will be low enough, and the very presence of foreigners on British soil constitutes an affront. It is not a game mainstream politicians can ever win. Viktor Orbán in Hungary, no one’s definition of a moderate, is under increasing pressure from the yet more extreme rhetoric of the Jobbik party, having made immigration controls an electoral priority in a country where barely 2% of residents are foreign born.

Likewise in the UK, Farage’s Ukippers are waiting in the wings to demand ever more extreme ‘crackdowns’, while Britain’s gutter press will continue to exaggerate or invent stories. In the immediate wake of the vote to leave, The Sunday People pasted its front page with the warning “500,000 Migrants Heading to Britain”.

Boris Johnson – whatever his real views – is pandering to the extremists. I don’t want him running our country.