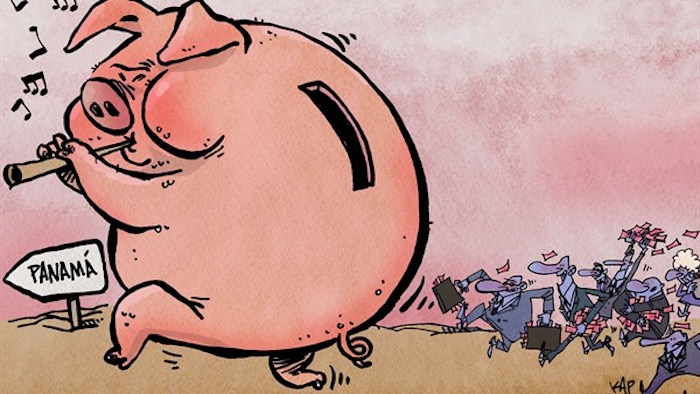 Panama papers on the one hand, domestic corruption scandals in Spain, Brazil, South Africa, Romania and nearly everywhere else on the other. The world seems to be getting more corrupt, but the public is getting more aware and less forgiving, says international expert Alina Mungiu-Pippidi.

Alina Mungiu-Pippidi, an international expert on public integrity and corruption, answers our questions on the current trend in how corruption is perceived in Europe and abroad and on the fallout from the Panama papers, a leaked set of 11.5 million confidential documents about more than 214,000 offshore companies listed by the Panamanian corporate service provider Mossack Fonseca.

It seems that corruption is on everybody’s lips these days. Is corruption on the rise?

Transparency is on the rise, which highlights previously existing corruption. Also the tolerance from the public has gone down due to the crisis and austerity. Many people thought it’s OK that politicians took a small undue share of public wealth when wealth was high. Now that it’s no longer the case, middle class voters have become quite intolerant to corruption, and since in developing countries they are more numerous than ever, we see that not only in rich Iceland, but also in Brazil and India the demand for good governance has increased.

Are the Panama papers about corruption at all?

Yes, they are. Corruption is not necessarily illegal. As we argue in our report for the Dutch EU Presidency, Europeans' perception of how well their governments handle corruption is the second most important cause of loss of trust in EU, after economic growth. Two thirds of Europeans are concerned with corruption in Eurobarometers, nearly as many as in the global samples of Global Corruption barometer. Since only less than 10 percent of Europeans have ever been asked for a bribe (including here the bribes for poorly paid doctors in Eastern Europe, which should actually be seen as direct forms of payment), the result is that people do not limit corruption to bribes but frame it as undue privileges for office holders and pubic officials in general. And this is what Panama papers are about – unequal treatment, ordinary people paying their taxes while those high on power and status maximise their profits. This is actually what Thomas Piketty missed in his major work on inequality where he does not use the word corruption at all, that power capital has translated a lot into money and assets in the last decades.

How does this show?

Well, one can take the Forbes list of top business people per country and calculate how many of them amassed their fortunes by some privileged relation with authorities – public contracts, tax breaks or any form of privilege. In healthy capitalist contexts you find very few of those on top (occupied by retailers, for instance), while in many developing countries the top fifty are just oligarchs benefitting from government favouritism, it reads like a who's who of crony capitalism. In developed countries you will always find rent seekers as well, but the foundations of the competition will be sounder. Still, what happened at Siemens and Volkswagen, as well as with top political figures in France, UK or Spain over recent years have been eye-opening. Corruption is in the human nature, only some developed countries have managed to build better defences because their societies are stronger and better able to control political elites.

Does this distinction between more or less developed make any sense at all in a globalised world, where corruption seems to be the first to go global?

Alas, it does, because while it’s true that corruption spreads easily where there is no jurisdiction, the opposite is not: exporting good governance is a failed industry, with no single success case to point at. The very few countries which have progressed to good governance in the last thirty years – no more than ten or twelve, which have done it through domestic evolution, not any kind of external norms transfer. The main obstacles to corruption remain therefore national societal constraints, and this is why the Icelandic prime minister had to go, while Mr Zuma or Ms Rouseff are still there despite far clearer evidence. I hope we shall arrive at some tipping point in such countries soon, but it may need more activism and more time.

Does this imply that the international community in general, and EU in particular, cannot do much?

They can do a lot, but they should be seen rather as enablers, not main actors. First, they could police their own assistance funds better and make an example of how transparent and smart those funds are spent – Greece or Sicily are notorious examples of EU long-term investment, as Mr Varoufakis says with some justice, in regional barons instead of communities. Second, developed countries should and have started to expand jurisdiction to their own companies investing abroad and to penalise people who use Western banks to transfer bribes, as in the FIFA case. Third, making all data digital and transparent in developed countries and abroad – from assistance funds to procurement – will both help set an example and deter corruption directly. Germany is far behind Estonia in procurement transparency. USAID grants are not posted, even good governance ones are not public information. EU funds in some countries, like Greece or Romania, are also quite non-transparent. But finally, we have to understand that unless domestic defences are built by domestic coalitions for change, while we recover expensively the embezzled funds of some failed head of state another individual or political party who comes after him will steal ten times more. We have to change rules of the game in public finance, with complete transparency, in order to monitor rent seekers. Besides the offshore destinations that we should black list, most countries have “Virgin Islands” within their own borders and apply different set of rules for different individuals and companies. Those can only be dismantled by the local people, even if we collect evidence on what strategies work best that we can offer.

I see a sample of such advice on the new webpage that you are launching during OECD’s integrity week in Paris (April 19-21). Why should people visit it?

We offer the most practical product of our academic efforts there, a statistically tested and fully objective index measuring the capacity to control corruption of a country, the institutional framework of public integrity more exactly. It has six components, from the digital empowerment of citizens (e-citizens) to administrative discretion in the form of red tape. Any country can see how they rank globally alongside other countries on all dimensions and both governments and civil societies can start their strategies on this evidence, if they really want to change something.