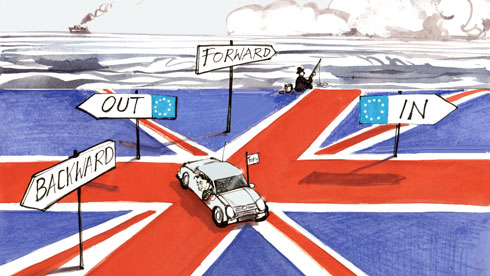 Eurosceptic politicians in England call for a referendum on EU membership to defend the integrity of the United Kingdom. But they contradict public opinion, especially in Scotland, where a more positive view of the EU could fuel pro-independence sentiment.

A [United Kingdom Independence Party] UKIP victory in the 2014 European elections could prove a game-changer in shaking up Scotland’s independence referendum, putting the Yes camp back in the race, leading academic expert Charlie Jeffrey told the [Institute for Public Policy Research] IPPR at the launch of a new report on Englishness [on July 8].

Many Scots say that if Britain seemed likely to leave the EU, they could change their minds about independence. Polling suggests this could erode the current steady lead for the pro-Union campaign and turn the referendum into a neck-and-neck race.

Jeffrey said that a UKIP victory in the 2014 elections, and increasing pressure for an in/out referendum in the political and media reactions to this, would create a sense that Britain’s membership is in doubt, just a few months before the independence vote next September.

Professor Jeffrey, who heads the University of Edinburgh’s politics department, is one of the co-authors of the new IPPR report England and its two Unions, which shows that there are increasingly divergent views of the EU north and south of the border, with English voters becoming more strongly eurosceptic and taking the prospect of exit very seriously, while most Scots believe that the benefits of EU membership outweigh the disadvantages.