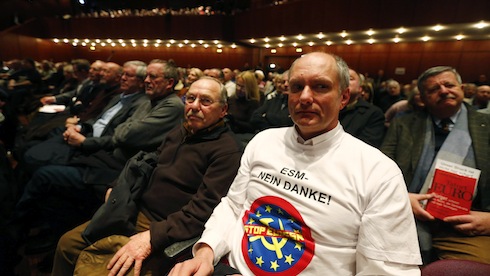 The "Alternative for Germany" party, which will be officially launched on April 14, aims to take the federal republic out of the euro. Although its founders lack a well-defined roadmap, they could still bother Angela Merkel in September's general elections.

Unveiling Alternative für Deutschland at Oberursel, in the Hesse region, on March 11

Seeming a little tense in the runup to the founding congress on Sunday, April 14, Alexander Gauland arranged to meet us in one of the quietest restaurants in the Regierungsviertel [Berlin’s government neighbourhood]. Recognisable with his tweed jacket and salt-and-pepper hair, when he arrives this impression is confirmed: the hoopla over his new party has begun to make him a little uneasy.

At age 72, Gauland is the co-founder of Alternative für Deutschland (Alternative for Germany) (AfD). As of Friday, April 5, close to 1,500 people have already registered to take part in the congress, more than the capacity of the conference room, which has been reserved for the occasion at Berlin’s Hotel InterConti. "After all, you never know who is coming," explains Alexander Gauland. While others have welcomed this success, he is worried about too many cranks taking the floor.
Starting on April 14, Germans who are disenchanted with Angela Merkel’s insistence that "there is no alternative" will perhaps have an “alternative”. Although it targets the cartel of traditional parties and the power of banks, AfD’s main enemy is the euro. The organisation wants a return to the Deutsche Mark, and if it succeeds in getting a foot in the door of the Bundestag this autumn, the AfD will be fighting for the dissolution of the single currency.

A recent poll found that 26 per cent of respondents would be willing to vote for an anti-euro party. At the beginning of April, AfD had already secured the support of 6,000 members. Its public platform, the party will likely attract voters from the extremes of the political spectrum and its leadership has already been obliged to exclude a certain number of far-right sympathisers. But it is clear that most of the AfD’s supporters will mainly be poached from the ranks of the traditional right. In particular, it is targeting disaffected CDU [Christian Democrat] and FDP [liberal] voters. As CDU MP Klaus-Peter Willsch has pointed out, "This kind of party is a danger for us."

Alexander Gauland, who is himself one of these defectors, first became a card-carrying member of the CDU 50 years ago. At the time, things were much clearer and it was easier to do politics. The CDU stood for nuclear power, military service and traditional family values. The mark was the strongest currency in Europe. Today, everything has changed, and it is a difficult time for conservatives. When Angela Merkel pushed through a change to the law on energy transition, Alexander Gauland began to have doubts about his party. Thereafter, when she spent billions saving the euro, he felt a line had been crossed. "The euro doesn’t work," he insists. "The currency is not uniting the continent, but dividing it." A few weeks ago, he left the CDU, slamming the door behind him, and set out in search of a new haven of conservatism.

At 50, Bernd Lucke has been hailed as the antidote to this predominance of white-haired luminaries. The youthful economics professor, who has been tipped to win the election to lead the party, has a gift for presenting his point of view in a clear and comprehensible manner. His tone, which is far from professorial, is refreshing.

However, the professors may have some difficulty in taking control of what many want to be a mass movement. Bernd Lucke has already tried his luck in regional elections in Lower Saxony, where he joined forces with an alliance of independents. Not content to campaign on his own behalf, he also proposed that each of the candidates in the group organise a conference on the euro in their respective constituencies. However, the campaigners were less than enthusiastic about the offer of a free lecture.

All the more since Bernd Lucke does not offer many details of the alternative to Angela Merkel’s pro-euro line. He explains that within the party there is no unanimous view as to the exact course of action. However, [in the EU] decisions have to be backed by a consensus. In other words: the countries that Germany wants to kick out of the euro will have to agree to leave. But why would they, if Germany is willing to foot the bill? That is the key arguement proposed by the party, affirms Lucke. "There will be no more transfer payments." And the resentment of Germany that this might trigger? Naturally we would have to be very vigilant on this point. "We will have to sit down at the table and explain to the others that it is impossible to continue like this." Angela Merkel will also have to discuss the question with François Hollande and politely ask him to leave the euro. All she has to say is, "Promise me François, you won’t be annoyed. Will you?" Lucke might as well be demanding the abolition of long winters.

Having said that, political parties do not necessarily need realistic plans to be successful. At the same time, pollsters are not convinced that the AfD will succeed in obtaining the 5 per cent of the vote it will need to enter parliament after September’s general elections. "In economic terms, Germany is still doing well, which reduces the chances of protest parties," points out Richard Hilmer, of the Infratest Dimap Institute. And we should also bear in mind that, in spite of the Eurozone crisis, the population still has confidence in the federal government. "European policy is Angela Merkel’s major strong point." AfD could nonetheless be a threat to the chancellor in the elections in a situation where the CDU/FDP and SPD/Green alliances finish neck and neck.