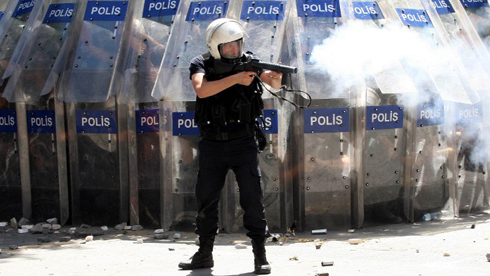 Erdoğan besieged in his ivory tower

Why have the demonstrations against an urban planning project in Istanbul turned into protests against the power of the Prime Minister? Because he has refused to listen to criticism for far too long and seems determined to push ahead regardless, writes a columnist.

Hearing the comments made by the Prime Minister after the start of the events in Taksim Square, one quickly grasps the problems democracy is facing in our country. Recep Tayyip Erdoğan is criticising everyone: the opposition, the protesters, and even the police, who went too far in their use of tear gas. Just in passing, he forgets to criticise his own actions and those of his government. Even the Governor of Istanbul has been spared.

And so the responsibility for the latest events falls entirely on junior police officers. If it was just a matter of police excesses, in a democratic state the government should be accountable for them. What’s more, Turkey has no law that sets out precisely the conditions under which this gas may be used. The government that has given the police such power has not even taken the trouble to bring in a little legislation on this subject.

That said, the crisis that started in Gezi Park goes far beyond the excesses of the police in using tear gas. Indeed, it is a true civil disobedience movement that is emerging today, following a mobilisation against the felling of trees, the legal basis for which is questionable [Radikal has revealed the existence of an official expert report denying the legitimacy of this project to transform the Gezi Park]. What we are witnessing is a response to a form of State terrorism that denies the right of assembly and demonstration.

Erdoğan, who is holed up in an ivory tower where criticism can no longer reach him, is unwilling to see that the projects he has decided on and considers useful to the community actually raise serious objections in many sections of society. He does not want to hear that this society no longer accepts that all the decision-making levers should be in the hands of one man.

He fails to see that bringing the media to heel, dismissing critical editorialists, choosing a name for the third bridge over the Bosphorus that has deeply shocked the Alevis [the Yavuz Sultan Selim Bridge, after the Ottoman Sultan Selim I, 1470-1520, known for his repression of the Alevis, heterodox Anatolian Shiites], bringing in severe restrictions on the consumption of alcohol on the pretext of protecting health, and responding violently to the demonstrators at Gezi Park have created the feeling that everything has been imposed by force and that tyranny now reigns.

The Prime Minister is asking that the absence of criticism that marks the atmosphere of his party be extended to the rest of society. He does not even want to hear the objections of conservatives, observant Muslims and liberals who have long supported him. He refuses to see the profound unhappiness in the very different sections of society caused by the rise of authoritarianism while he was still in a position to create the only democratic regime of the Muslim world that attracted so much interest internationally.

The virtue of flexibility

He has not grasped that to make room for the minority, even if he does have a comfortable majority, is not a sign of a lack of power but indeed evidence of virtue, and that to be able to show flexibility when required is not a sign of weakness but of a great political intelligence.

Instead of looking at himself critically, he poured oil on the flames and seems to be hoping that the protest movement will be taken over by radical organisations, all the better to discredit it. By declaring that he will knock down the Ataturk Cultural Centre [AKM, convention centre, concert hall and opera house located on Taksim Square] and erect a mosque there, hoping thereby to bring practicing Muslims onside, he is playing with the polarisation of society, and so embarking on an extremely risky business.

Following a weekend of protests, Yeni Safak has chose to devote a big headline to “Advertising blackmail”. As the pro-government daily explains, "international advertising agencies have stopped advertising for certain products in several Turkish media, under the pretext that the events in Istanbul would damage their images". “This gives the impression that behind it all lurks a political operation", the journal adds.

Yeni Safak also gives a lot of space to the vandalism that protesters in the district around Taksim Square are reportedly guilty of. Referring to the presence of "illegal organisations” among them, the journal illustrates the vandalism of the demonstrators with a few photos of destroyed buses and smashed street lamps, accusing the demonstrators of "smiling and having fun while they smash things up". It also reports assaults allegedly committed by some of these protestors against women wearing headscarves.