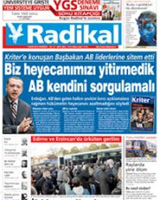 Launched in 1996 by the Doğan group, Radikal aimed to become the newspaper of Turkey’s liberal and left-wing intellectuals and is known as "Cumhuriyet light" in reference to the Kemalist daily it hopes to rival. Despite a low circulation, Doğan, which also controls other Turkish dailies such as Milliyet, Sabah and Referans, can take comfort in the fact that Radikal, because of the quality of its articles and the relevance of its commentators, is one of the most influential of the Turkish papers. Several writers, including the winner of the Nobel Prize for Literature, Orhan Pamuk, have, on occasion, acted as the paper’s editor in chief.