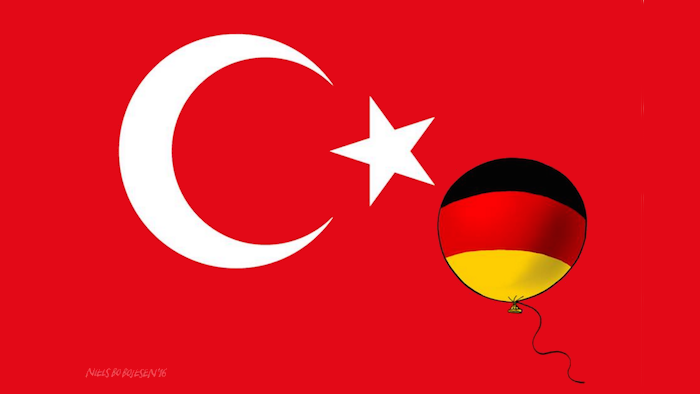 In accusing the main contenders of being anti-Turkish, Turkey’s president has interfered with the upcoming elections in Germany, where nearly five million people of Turkish origin live. Both Angela Merkel and Martin Schulz now exclude any possibility of Ankara’s accession to the EU.

“I say this to all my compatriots in Germany: do not support the Christian Democrats, the SPD or the Greens. They are all enemies of Turkey.” In Berlin, Erdoğan’s declaration struck like a lightning bolt: on August 19th, politicians and commentators understood that the strong man of Ankara had, as Die Zeit reported,

launched an appeal to the German electorate of Turkish origin, asking them not to vote for any of those parties. Rather, on September 24th, they should vote for parties who don’t support supposed anti-Turkish policies. […] Erdoğan, however, did not say which parties those would be.

The stakes are high, since, as the Tagesspiegel reports,

here are about 1.25 million Germans of Turkish origin with the right to vote. Studies show that about two thirds of these mostly vote for the SPD, while the rest vote for the Greens, Die Linke and the CDU. Despite their preference for the social democrats, many Germans of Turkish origin simultaneously support Erdoğan and his conservative-Islamist party, the AKP. The AKP generally fares better in Germany than it does in Turkey [where it is already the largest party].

The German-Turkish electorate’s paradoxical electoral inclinations can be explained, on the one hand, by their attachment to tradition (embodied by Erdoğan), and on the other hand, by the knowledge that the SPD, among the major parties, is the one with the most favorable attitude towards the integration of migrants.

So, who will they vote for now that Erdoğan has told them who not to vote for? One problem is that there are only three other parties of any significance: Die Linke (far-left), the FPD (liberal) and the AFD (far-right). Sahra Wagenknecht, leader of Die Linke, with an Iranian background, is particularly concerned with human rights violations in the middle-east, and has not been shy in criticising the Turkish president on this front. The FPD stated quite plainly that it is “impossible to cooperate with Turkey”.

Canan Topçu, the German-Turkish writer and journalist, has, with good reason, gone so far as to ask in Die Zeit if she’s supposed to vote for the far-right, before adding that she supposes,

like many others, that Erdoğan is either ranting aimlessly or knowingly engaging in provocation to make himself look stronger. This is perfectly fine for his supporters, who might be seen as having something of an inferiority complex. They hold their “Reis” [Turkish for “chief”] in high regard precisely because he has no verbal inhibition, refuses to kneel to the EU or any EU member-states, and speaks back to Merkel and co.

Even if Erdoğan’s declaration came as a surprise, it followed a deterioration in German-Turkish relations which had already been ongoing for several months, notes again Die Zeit:

On the other hand, as the Tagesspiegel explains, “Ankara accuses Berlin of granting asylum to participants in last year’s failed coup and blocking plans to expand the EU customs union.”
The media hadn’t stopped talking about Erdoğan’s polemic before Germany’s politicians had entered the fray. During the debate on September 3rd between Martin Schulz and Angela Merkel, the former president of the European Parliament tried to distinguish himself from Merkel by calling for a halt to negotiations for Turkish accession to the EU. The problem for Schulz was that Merkel agreed with him – refusing to countenance the accession of an authoritarian regime to the EU.
Die Welt reports that this unanimous condemnation of the Turkish government put the “Reis” in a foul mood: “

he said that what is happening is nazism and fascism. While he was careful not to claim that the politicians themselves were Nazis, his discourse was nevertheless equivocal. He lamented the fact that Turkey and he himself had become themes of the electoral campaign, all the while emphasising that his country still hoped to join the European Union.

Things certainly haven’t ended there. On September 15th, the chancellor stressed that she was going to limit economic cooperation between the two countries. As the Frankfurter Allgemeine Zeitung notes,

the aim is to have the 54 German citizens wrongly imprisoned in Turkey freed. Merkel, meanwhile, warned Ankara that diplomatic ties between the two countries may even be cut if there is no progress in the matter.

Have German-Turkish relations reached the point of no return? Certainly, Erdoğan wants above all to reinforce his standing among his compatriots, whether they reside in Germany or Turkey, and that is his primary motivation for making provocative declarations. Certainly, Martin Schulz opened the Turkish Pandora’s box because he’s been losing ground in the polls, and a certain confusion reigns among the German electorate, since Merkel’s CDU and Schulz’s SPD work hand in hand in the coalition government. These stakes will disappear once Angela Merkel’s victory – likely a resounding one – is announced. But the problem itself won’t disappear so fast. Wounds don’t heal quickly in politics, and the German-Turkish crisis threatens to continue for years to come.

Paradoxically, another crisis may cause the two countries to change tack: namely, the migrant crisis. The Balkan route passes and will inexorably keep passing through Turkey. If the flow increases, Berlin will have to make concessions so that Turkey can handle the situation, and send the migrants home. So much, then, for the political prisoners…