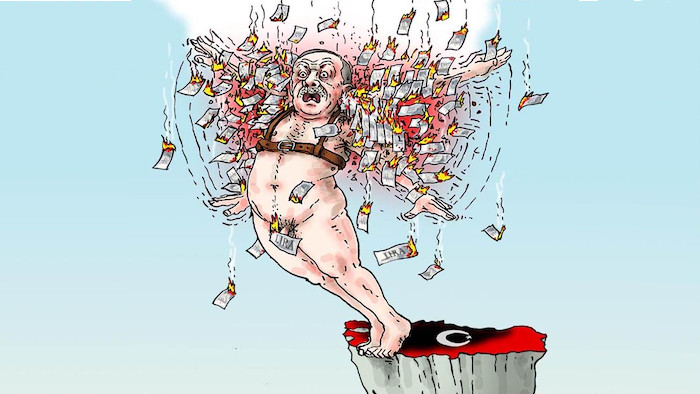 Turkey plans to open what it dubs the world’s largest airport, a massive infrastructure project in keeping with President Recep Tayyip Erdoğan's outsized influence on national politics. But will he be able to retain his tight grip given the country’s economic situation?

Samuel Huntington’s famous thesis that the age of globalisation would not lead to a harmonious unification of humanity but to a “clash of civilizations” was and remains controversial. It is doubtless a great simplification of reality. However, even his staunchest critics would have to admit that, at least concerning the Republic of Turkey, his arguments have aged remarkably well.

For Huntington, Turkey was a tragic “cleft nation,” torn since its foundation in 1923 by the Western-oriented and secular Mustafa Kemal Atatürk, between European aspirations and an incorrigibly Islamic and Middle-Eastern culture. Turkey’s current president, Recep Tayyip Erdoğan, has seemingly done everything possible to credit Huntington’s ideas. The country’s “European path” has been put on hold indefinitely. Through illiberal methods and by appealing to nationalist and religious sentiment, he scored points among his countrymen.

This is not to say that Turkey has closed its doors to the world. The country is affected by the same winds of globalisation that are felt everywhere and international business connections are flourishing. End October, Turkey is to inaugurate the world’s largest airport: the Istanbul New Airport, with a 150 million annual passenger capacity. That is enough to even give Dubai a run for its money.

The sprawling airport, which lies more than 40 kilometers from the city’s commercial center, is one of a series of outsized infrastructure projects which Erdogan has backed, symbolic of his larger-than-life stamp on national and international politics.

Since Erdoğan took the helm in 2003, the country has been increasingly in his iron grip - following its own political and cultural path. His rule tightened after what remains a rather mysterious coup attempt by parts of the secularist military in July 2016, which triggered Erdoğan’s major crackdown against his opponents.

The Bertelsmann Stiftung’s recently released Sustainable Governance Indicators 2018 report on Turkey explained that the repression continued throughout 2017, with the government passing numerous laws by executive decree, and closing down or limiting media outlets and detaining journalists. “Fundamental rights and freedoms are deemed to be severely at danger. Insulting the president is a criminal offense, with thousands of people facing years in prison,” it wrote. Turkey’s shrinking freedoms are reflected in the country’s SGI score for Quality of Democracy, which declined from 4.7 in 2014 to 3.0 in 2018.This put Turkey at the overall bottom spot in the ranking list.

Despite these abuses, Erdoğan has consistently succeeded in receiving backing by majorities of his countrymen. In April 2017, he won a referendum by a narrow majority, allowing him to reform the constitution to strengthen his own powers a president. In June 2018, he was re-elected president and won a majority in the parliamentary elections, in alliance with the Nationalist Movement Party (MHP).

This is not to say that secular and liberal values hold no appeal in Turkey. On the contrary, a significant and vocal minority are fighting for these principles. However, the reality of Turkish politics is, as the SGI 2018 notes, a “massive polarization of the pro- and anti-government camps is present across all spheres of political, economic and social life” and a concurrent total lack of public trust.

Joining the European Union theoretically remains a shared goal across the Turkish political class: the Turks have understandably wished to enjoy the economic, social, and geopolitical benefits which Western Europeans take for granted. Yet, there is little sign of a “Europeanisation” of the values of Turkish society. Labor participation for women is a mere 32 percent, about half the EU average. Turkish politicians have, with Erdoğan’s backing, periodically moved to reinstate the death penalty for terrorists and child-killers. They have held back only because EU officials have warned this would mean the end for Turkey’s European ambitions. Over 100 journalists continue to be imprisoned in Turkey, a world record.

Turkish politics has been dominated by the conflict between Erdoğan’s Islamist Law and Justice Party (AKP) and the mysterious Gülen movement, an Islamic social movement inspired by Fethullah Gülen, a U.S.-based Turkish preacher. Such encroachment of aggressively religious factions is largely alien to Western European politics (notwithstanding the Christian-Democratic name of many conservative parties).

The cultural divides between Europe and Turkey have also been particularly apparent around the Turkish minorities now living in Western Europe. These minorities have become a recurrent source of conflict between Erdoğan and various European leaders. While Europeans have urged Turks to integrate and adopt Western values, Erdoğan has told them that assimilation is a “crime against humanity.” The Turkish government has made major efforts for European-Turks to maintain their separate identity and traditional values.

Last month, Erdoğan attended the inauguration of a mega-mosque in central Cologne, able to host 1100 worshipers, and funded by the Turkish-Islamic Union for Religious Affairs (DITIB). The DITIB claims to represent 70 percent of German Muslims, has close ties to the Turkish government, and its imams have even been investigated by German police for allegedly spying for Ankara. Erdoğan’s presence was opposed by thousands of German protesters as well as leading local politicians, such as the mayor of Cologne and the minister-president of North-Rhine-Westphalia.

Relations with Europe in limbo

Both Turkish and European politicians have used controversies surrounding Turkish minorities in Europe for electoral gain. There seems to be a regular ritual whereby Erdoğan “controversially” visits Turkish schools or holds a mass rally in Europe, sparking ostentatious opposition by European conservative politicians. This bit of theater certainly appears politically effective. In the recent elections, the Turkish diaspora in Europe typically voted by large majorities in favor of Erdoğan, which unfortunately may also be taken as a poor marker of integration by this generation of Turks into European society.

Geopolitically, Turkey appears to have no particular direction. Concerning Europe, relations have been indefinitely put in limbo due to developments on both sides. As mentioned, Turkey is by no means “Europeanising” under Erdoğan. On the other hand, there is no appetite for further EU enlargement on the European side anyway. Turkey, with its growing population of 82 million people, is on the verge of overtaking Germany in size. Given its still relatively poor economy, it would represent a huge economic burden for the European budget and mean a significant transformation of EU politics. It also seems extremely unlikely that all 28 (or 27 after Brexit) EU governments would approve Turkish membership given that several European governments are ruled or supported by anti-immigration and sometimes Islamophobic nationalist parties.

And yet, Erdoğan has not charted a coherent alternative course. Turkish foreign policy has been erratic, with regular crises in relations with just about everyone, whether the EU, Israel, Russia, or the United States. Indeed, the recent deterioration of relations with the U.S. under President Donald Trump may prove a step too far for Erdoğan. Frustrated by the U.S.’s unwillingness to deport Fethullah Gülen, Turkey has imprisoned American pastor Andrew Brunson, leading the U.S. to impose sanctions.

Trump and Erdoğan are in many ways similar as populist “big men,” but this is evidently an unequal struggle. Erdoğan certainly has a firm grip on the Turkish state and much of the media, while Trump is opposed by vast swathes of the media and governmental establishment. However, America’s power simply outstrips Turkey on every metric. Since U.S. sanctions have been imposed, inflation in Turkey has spiked to 25 percent and the Turkish lira has lost a third of its value since the beginning of the year.

Turkey’s economic performance has been typical of the vast majority of nations, caught in the “middle-income trap,” with years of solid growth through partial convergence with the West being followed by years of stagnation long before reaching Western standards of living. In the last two years, the Turkish economy has stagnated, with economic growth barely keeping up with population growth and unemployment standing at 9.9 percent. On the other hand, Erdoğan has exercised a certain amount of macroeconomic discipline: government deficits are low and debt is stable below 30 percent of gross domestic product, meaning that its current economic performance might at least be sustainable.

Turkey’s future under Erdoğan then appears somewhat unique: on the one hand political stability under a semi-authoritarian but popular leader, on the other geopolitical isolation and erratic developments. This course appears quite stable, assuming the conflict with the U.S. does not escalate into a general economic crisis. Much then depends on the new generation of young Turks, who, like their young peers worldwide, have been raised as much by the Internet as by their society. It remains to be seen what values they choose to adopt as they get older.