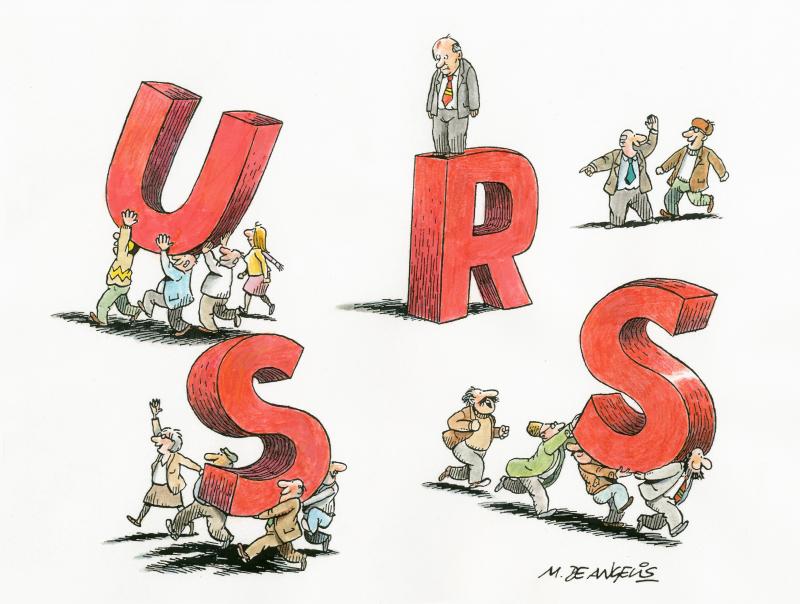 How the children of perestroika ended up eating each other

In the 30 years since the end of communism in Central and Eastern Europe, those who were in their twenties when the Berlin wall fell went from being the most liberal and hopeful to the most conservative and revanchist. What happened to the “cannibal generation?", asks the author of The Wild Dingo Children.

My generation – what I call the "wild dingo children", the last generation of Soviet children – was perhaps the most liberal generation of the East. The writer of our generation, Viktor Pelevin, called it Generation P – for Pepsi. But it was short-lived. And it turned into the "cannibal generation".

But let's take it one step at a time: on 10 April 1988, the then Secretary-General of the Soviet Communist party Mikhail Gorbachev proposed limiting and destroying nuclear weapons. To mark this event, a coin was produced: on the one side of it was the USSR ruble, while on the reverse side was the US dollar. It is a coin made from destroyed nuclear missiles, made of a very light alloy.

More : NO to the War! Only Russians can stop the aggression

It is 2.5 times lighter than silver. "When you hold it in your hand, you get a strange feeling. You expect it to be heavier, but it feels like goose down," a friend tells me.

That's what our liberalism has been like: part Soviet, part American – it leaves you with the feeling that it's very heavy, hard to destroy, but it's like fluff blown by the winds of history. In 30 years, our generation has gone from being the most liberal to perhaps the most conservative – an unbridled revanchism has swept over us. And I'm afraid it's a much deeper revanchism than one of the Eastern kind. The coin has two faces.

In 1988, we, the children of perestroika, were more liberal than the West, more American than the Americans – we believed so much in their values that we scared even them. We were giving them not only the country of our parents and grandparents, we were giving them not only our souls – we were giving them the future. Our future was their future: we offered it up with mystical enthusiasm. It all happened after 1989-1991. Only, we were also the other side of the coin. We were not aware – and I am not sure how aware they were – of the "great transformation".

The liberal world and the whole of capitalism, which in the 1960s and 1970s seemed to be in crisis, were resuscitated by one of the pivotal events of the 20th century – the fall of communism. Which is largely due to us: we, the people of the East, made it, and we destroyed it. And we became a kind of terrible transfusion of energy: from the infusion of market, capital, and human resources to the mad enthusiasm that every regime needs. As we used to sing: “This tender vampire has received a new barrel of fresh blood”. We resuscitated the whole system. And it worked; yet, something, profoundly, didn't work.

In this transition we were soldiers who fought on all fronts and lost all possible and impossible battles. We could have fought and won any battle – but we lost everything.

Somewhere, somehow, the "chain of love" got broken. Although, even then, the new idols – nationalism, Orthodoxy and oligarchic capital – did not bode well. And so I end my book The Wild Dingo Children (Polirom 2021) – with a deep sense of unease, and dread, that an age of revenge is coming. I recite the Romanian romantic poet George Bacovia, with this eerie feeling:

I must drink, to forget what no one knows

O, come at once, great future.

Not longer than five years ago I was writing that an age of revenge was coming: the idea that the generation of greatest hope had become a generation of despair had been clear for me. Frankly, I didn't know what this revenge would look like. I had some scenarios in mind, but not war. Nevertheless, I was already calling it the "cannibal generation". The terrible desire for revenge is built on resentment.

Let me remind you that, according to Nietzsche, resentment is a state of anger and hatred in which one considers oneself the victim of an injustice and has no possibility of redressing that injustice. Unlike ordinary anger and envy, resentment has a kind of creative power: it creates a system of values which, on the one hand, justifies the exceptionality of the sufferer and, on the other, explains his misfortunes, which come from vile enemies. This does not mean that the desired revenge does not also have a social, political and economic reality. It has that in spades.

But I knew a few things for sure: that in this transition we were soldiers who fought on all fronts and lost all possible and impossible battles. We could have fought and won any battle – but we lost everything. From education to health, from infrastructure to social mobility, from family to career, from security to stability. Everything: we have seen our social carpet shredded and we have lost our autonomy: politically, socially, intellectually, everything. The problem and the solution were suddenly no longer in us, but elsewhere. And I'm not one to blame others: we lost – we became our own powerlessness: we lost our historical meaningfulness.

After the excitement of the 1990s passed, there followed a vast process of self-shaming – "brainwashed", "underdeveloped", "uncivilised". That's how we were labelled. We had plenty of social and economic humiliation - massive job losses, unskilled jobs, low-paid work, economic migration, destruction of families and social relations, destruction of industry, education, and health. Total insecurity brought about by shock therapy.

We were asked to "change our mentality" – we were perceived as being subhuman. Instead of natural integration – with our good and our bad things – we were offered a new, bottomless form of violence and humiliation. We had to humiliatingly give up everything we were – to be ashamed of ourselves and our past. Were we considered politically illiterate. We, who maturely destroyed a dictatorial regime.

The harshness and violence of transition, totally unjust and inequitable – politically, socially and economically – was for a large section of society humiliating and dehumanising. In place of the old humiliations and dehumanisations came new ones. Perhaps even more profound, that have drained us of a modicum of hope and meaning. Many have become silent, and await revenge. The transition has been a kind of "counter-revolution": the victory of the very few over the very many.

That is, we felt betrayed, used, abandoned, humiliated. But most of all – defeated. I repeat, I never blame others. But even worse – we feel we have totally lost control over our children and the whole of society. The bulk of our children no longer want to stay in the East – their future is "outside" it. That's all we could do. The result? States captured by oligarchs and corporations, by the new landlords – predatory elites, abandoned populations transformed into the new serfdom, institutions – estates functioning only for a small elite, huge masses whose interests are not represented and whose voice is not heard.

This multitude, removed from the mechanisms of access to political decisions, representation, redistribution, access to social mobility, to education, health, social protection, decent work and political sense, will sooner or later retaliate. And surely the "populist" Putin was inevitable, who would direct this immense disconte…