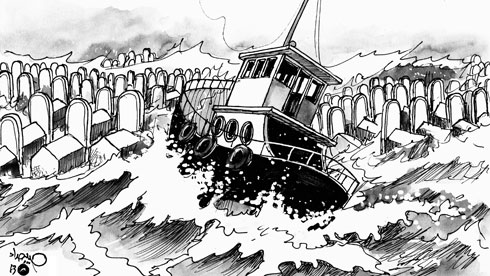 The tightening-up of European border controls does not discourage migrants and is a boon for smugglers. The best strategy would be to treat the root of the phenomenon – poverty in the immigrants’ home countries.

Khaled Bensalam is 35 and has a great deal of naval experience. His father was a fisherman so they never went hungry. He started going out to sea with him when he was young and by the time he was a teenager, was already taking the helm. When the fishing business became unprofitable, he switched to people smuggling. From Tunisia, where he lives, it is hardly a long cruise to Europe. The distance to the Italian island of Lampedusa is just 70 miles, which means 22 hours of sailing if the sea is calm. After deducting costs (fuel, his brother-in-law who touts for business and bribes for the coast guard), two such trips a year allow him to live in relative luxury.

The first two in 2012 went smoothly. Italian journalists even interviewed their passengers; there were no more than 50 people on the 36-foot wooden boat. The cost varied from €1,000 for foreigners, through €800 for Tunisians, to €500 for kids. In April, Mr Bensalam had his first mishap; when they were approaching Lampedusa before dawn, his boat was accidentally illuminated by an Italian patrol boat’s searchlight.

Minutes later the Italians were aboard. Mr Bensalam was arrested and, a few days later, deported to Tunisia, where he spent several weeks in jail. The boat was confiscated but Mr Bensalam decided to go back into business. He borrowed some money from relatives and in a deal arranged by a local gang, bought a 60-foot boat that could carry 300 passengers.

In theory, that is, for when he set sail again at the end of September, there were more than 500 people aboard. This time everything went awry from the very beginning. First, someone fired at them when they were leaving port, causing damage to the engine. Then the bilge pump stopped working. Finally, the passengers panicked. When the boat sank off the coast of Lampedusa on October 3, at least 350 illegal immigrants lost their lives in what was eventually dubbed the “Lampedusa boat disaster”. Mr Bensalam himself survived and is awaiting trial. But on the very same day at least two more boats carrying illegal immigrants safely reached their destination. No risk, no reward, as the saying goes.

[[Illegal people smuggling has been claiming more and more victims, to the shame of the developed world]]. Nearly 2,000 people have drowned off the European Union’s southern coast since January 2013 alone - more than in the whole of last year. Migrant smuggling has also become a security risk for destination countries that have lost control of their borders. Finally, illegal immigration is fuelling xenophobic sentiment, a phenomenon which is increasingly being exploited by cynical politicians.

European governments spend billions of euros annually combatting the problem. Several EU member states have set up special agencies to deal with illegal immigration. Frontex, the EU border-protection agency, has been in operation since 2004. In both the EU and the US, borders are patrolled and guarded using the latest, most advanced technologies, including drones and satellites. Over three hundred NGOs, often subsidised with public funds, work to address the issue of illegal immigration in the EU alone. The effects? Hardly any. The number of illegal immigrants reaching the continent keeps growing.

In his book on people smuggling, Moroccan author Mehdi Lahlou describes what he calls the “vicious circle” of European anti-immigration policies. Politicians, followed by the mass media, exploit tragedies such as the October 3 Lampedusa disaster to exaggerate the problem of immigration, causing governments to narrow down the opportunity for legal migration even further. This, in turn, forces migrants to seek ever riskier ways of access, increasing their dependence in this regard on smugglers. This is exactly what happened when Spain and Italy introduced visas for Maghreb citizens in the early 1990s and the British succeeded in blocking the smuggling trail through Gibraltar, Mr Lahlou notes. Almost immediately, new, longer and riskier channels were activated: from the western Sahara to the Canary Islands and through the Mediterranean to Italy.

Europe’s failure in addressing the problem of people smuggling has largely been due to misunderstanding. To start with, there is a terminological mix-up because “people trafficking” and “people smuggling” are often used interchangeably in the European public debate while in fact they denote two completely different phenomena. Trafficking is a form of slavery while smuggling is voluntary. [[The relationship between the smuggler and the person being smuggled ends in the country of destination, that is at the point where the trafficker-slave relationship only begins]].

Tackling supply but not demand

The EU’s immigration policy has long focused on the smugglers, that is on the supply side of an illegal service. Following the Lampedusa disaster, Italian Prime Minister Enrico Letta pledged a new “air-and-sea” legislative package in which Italy would deploy three times as many ships and aircraft between Africa and Sicily to combat smuggling. But the effect can again be counterproductive.

In this business, it is demand (potential immigrants) that drives supply (smugglers). As long as people from central Africa, Afghanistan or Mexico are determined to leave their countries in search of a better life, there will always be those who are willing to help them for the right fee, whatever the difficulties.

According to immigration experts, the only way to stop human smuggling to Europe – or at least to reduce its scale – is to create such conditions in the would-be immigrants’ countries of origin that they are no longer interested in leaving. In other words, to make sure that they get at home the job they dream of getting in Europe. This, however, would require opening the European market – for food, in the first place – to produce from regions such as north Africa, which is impossible for political reasons. The EU spends €100m annually on protecting its borders through Frontex – 600 times less than it spends on its Common Agricultural Policy. So if Europeans don’t want Tunisian cabbage in Europe, they will sooner or later have the Tunisians themselves.