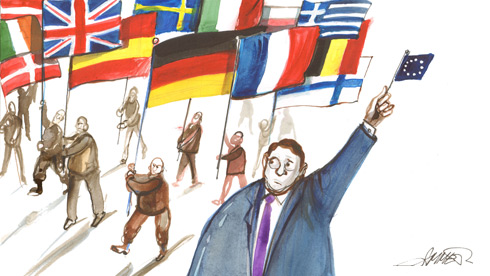 After five long years, the economic crisis has left a deep imprint in the EU, increasing mistrust between member states, but also cementing the belief in a common destiny. It’s time to bring renewed political leadership, writes El País.

The financial hurricane has left its mark in the European soul, an ugly scar that runs through the continent from north to south. The old and new stereotypes abound: the mendacity of the Greeks, the delirious exuberance of the Spaniards, the recklessness of the Irish, the self-serving leadership of the Germans. Along with this dialogue of the deaf between creditors and debtors comes the discovery that all the countries using the euro share a common fate.

Along the way, certainties have vanished and taboos have been broken, red lines stepped over and golden rules rewritten in a series of hasty decisions. That barrage of measures has staved off the worst, although it has left in its wake enduring stagnation, with unforeseeable consequences. A half-decade of crisis, with the suspicion that there was never any master plan to combat it, the next stage is the ‘second Refoundation’ (after the period starting in the 1950s and taking in the first transition, which started to get going with the fall of the Wall, included the creation of the euro and culminated in the entrance of the Eastern bloc).

The summiteering of the past few years pushed through austerity urbi et orbi: nobody argued against that prescription, though errors of diagnosis in some countries and a general overreaction, attributable to the severity of the debt crisis in 2010, were admitted. While Brussels has corrected its aim, the harsh reality is that only Germany has recovered its pre-crisis GDP level. Europe, for all that, has been alienating the Europeans: with the EU elections only six months away, Brussels is on guard against the rising disenchantment with the union. In the run-up to this date with the voters, 60 per cent of Europeans are suspicious of the EU, according to the most recent Eurobarometer data, compared with 31 per cent before the crisis.

[[The union was and remains a kind of expedition out to the horizon: there has never been a map for deciphering the labyrinths of this nebula called Brussels]]. In the eternal struggle between what is possible and what is desirable, the EU needs to find a middle way between those who believe that the turbulent times urge a leap into a federation – a highly unlikely United States of Europe – and those who are betting on a euro version of Apocalypse Now by Coppola, set to the music of Wagner.

“What’s likely is that there will be neither a leap into a federal state nor a break-up. Rather, that second transition will get underway, with the inevitable deceptions, like the eternal promise of the hypothetical return of Grand Politics,” says Luuk Van Middelaar, one of the most interesting voices in Brussels. Van Middelaar, author of the invaluable Passage to Europe and speechwriter for Van Rompuy, defines the union as “a state of permanent transition”. “What is urgent”, he says, “is to win over people: that cannot be done without an overall plan and without leadership.”

Analyst Moisés Naím backs this perspective. “Neither the European institutions nor the national political leaders have sufficient power today. […] Europe has been strong when it has had strong leadership. The current payroll in Brussels – Barroso, Ashton, Van Rompuy – can do no more.”

It’s not the world that is in crisis. It’s Europe. It is not an economic crisis, or not only an economic crisis: it is a political, institutional and governmental crisis. And, incidentally, a kind of revenge of history, of demography and geography that constitutes part of an earth-shifting movement of the centre of the world towards the Pacific.

[[Beyond the politics, or precisely because it is conspicuous by its absence, the future is cloudy]]. André Sapir, of Bruegel, suggests that the likely scenario for the Eurozone will be that it continue to muddle through for the next five years: “What is troubling is that there is still no consensus on the nature and causes of the crisis. That explains why we can only hope to somehow stumble across the answer.”

Daren Acemoglu, author of one of the fundamental books of recent times —Why Nations Fail — is among those who say that the second reform of the Union “is here”. In an interview with this newspaper, Acemoglu noted two revolutions among the latest European developments: the banking union and the prior review of national budgets. The banking union, in particular, can be a shedding of the skin, a change in the very nature of Europe. The euro club was always obsessed with public vices and with inflation, a sort of inheritance from German history. The euro has been equipped with control mechanisms for the public sector (of dubious credibility, as was seen in Maastricht); it was supposed that markets would regulate themselves and that private vices would correct themselves on their own: there was no need to pay attention to that. But the crisis is changing that approach: “If in the end there is no banking union, Europe will undergo a substantial change that can help correct its imbalances,” Acemoglu prophesises.

Europe, in short, is on track to wake up, assuming nothing goes wrong. To this end, the role of the ECB as banking supervisor is key. “We must continue with straightening out public finances and reforms, but in the banking union Europe is also eyeing other sources of vulnerabilities. For the ECB, that will mean a sudden dunking in reality, a fall from Olympus,” concludes another source.