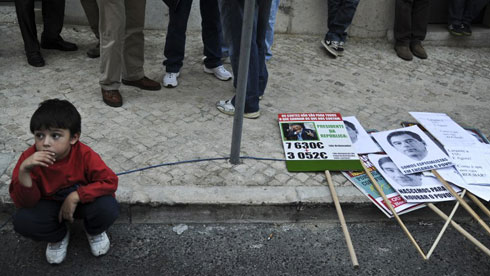 EU set back a generation

It will be decades before the most economically stricken countries recover their pre-crisis standard of living. And the gulf between with these states and those doing well is widening all the time, threatening the unity and stability of the EU.

During an anti-austerity demonstration, Lisbon, October 4, 2012.

Angela Merkel warned as early as in 2009: let’s not expect a miracle, because not even the boldest political decision will turn the European economy back on the path of growth. “At the time she was alone in saying this. Today it’s clear that she was right”, said Nicolas Veron, a senior fellow at Bruegel, the Brussels-based think tank.

In the fifth year of the crisis, the EU’s economic condition remains dismal, 17 out of the Union’s 27 member states being in recession. In the hardest-hit countries, such as Spain or Portugal, bringing living standards back to pre-crisis levels will take at least a generation. But the EU may not last as long. For the first time since its inception, the EU – unlike the eurozone – could disintegrate. The scenario is becoming more and more real with each successive month. It’s hard to say what is happening faster: the construction of an integrated eurozone bloc around Germany or the secession of the eurosceptic countries, notably Britain.

Ms Merkel, it needs to be admitted, didn’t want the EU to evolve in such a way and tried to prevent it. In particular, she was interested in keeping within a new, more closely integrated Union the countries of Central Europe, including Poland. They are not only Germany’s economic base (German companies having relocated much of their manufacturing operations here), but also Berlin’s frequent, and precious, ally in the EU Council, where they support structural reforms and responsible budget policies.

But this didn’t work. Market pressure meant that the eurozone leaders finally started laying the foundations of separate eurozone institutions: banking supervision, fiscal policy governance, a separate budget. “This was assumed to be a minimum step for ensuring the eurozone’s efficient functioning, but one that won’t undermine the EU’s foundations. Today it’s clear such expectations were unrealistic”, admitted Cinzia Alcidi at the Centre for European Policy Studies in Brussels.

Under particularly heavy pressure has been the pillar of integration – the single market. In countries trusted by investors, such as Germany or the Netherlands, the cost of credit is several times lower than in the peripheral economies. A level playing field, something that Brussels tried to ensure for the last five decades, is simply not there any more.

End of the European social model

This leads us to another of the failures of European integration: cohesion policy, aimed at ensuring equal living standards throughout the EU. Thanks to structural funds, but also to the EU’s open market, disparities in living standards were indeed minimalized. As recently as in 2009, Greece’s GDP per capita stood at 94 percent of the EU average, which was very close to what Germany’s (115 percent). Today the gap has widened: Greece’s GDP per capita has fallen to 75 percent and is similar to Poland’s, while Germany’s has risen to 125 percent of the EU average. Economists expect these disproportions to keep growing in the coming years.

“Such an evolution means that member states’ interests have increasingly diverged. Whereas the Romanians, Bulgarians, Greeks or Portuguese will want to retain at least the framework of the EU’s regional policy and will be pressing Brussels to concentrate funds there, the Germans and Swedes will focus on ecology or alternative energy sources. This will be a dialogue of the deaf,” said Mr Veron.

The crisis has also wiped out another of the great achievements of European integration, the object of the world’s envy for many decades: the European social model. The austerity measures already introduced or being planned not only in Spain or Greece but also in France or the UK mean a radical reduction of sick-leave benefits, employee rights, pensions or unemployment benefits. A generation of young people is emerging with no prospects of regular employment, nor the conditions to start a family.

Even the pro-European Der Spiegel admits that the EU’s decision-making centre has now shifted from Brussels to Berlin. This happened by elimination, not even because of any particular pressure from the Germans. Among the EU’s six major economies, two dropped out because of economic woes: Italy and Spain. Britain effectively excluded itself from the debate. And Poland, not even an eurozone member, remains too small an economy to be a major player. For some time it seemed that Europe would be driven by the Franco-German duo, the famed “Merkozy”. But at least since Francois Hollande’s election as president it has been clear that France has such economic problems that it is hardly a match for Germany in the European game. This left only Berlin.

Focused on its own problems, Europe has been too weak to play an active role internationally. This is yet another bleak prophecy that is coming true in front of our very eyes: collapse of common foreign policy. Ukraine’s creeping authoritarianism, the tragedy of Syria or China’s continued human rights abuses are but some examples of the EU’s newfound powerlessness.

The subject of enlargement has disappeared from the agenda; membership remains a viable prospect only for the Balkan countries. A more ambitious membership offer, particularly for the post-Soviet republics and Turkey, is no longer seriously discussed.

In the fifth year of the crisis, united Europe has survived so far. But the losses are colossal. In some respects, the EU is back on the integration path to where it was thirty or forty years ago. And even the optimists are hoping for things not to get worse...