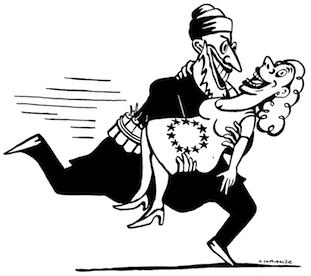 Radical islamist network Al Qaeda targets nationals of European countries because their governments are most likely to pay ransoms for hostages, according to an investigation by The New York Times.

Basing its research on interviews with former hostages, negotiators, diplomats and government officials across Europe, Africa and the Middle East, the paper finds —

Al Qaeda and its direct affiliates have taken in at least $125 million [€93m] in revenue from kidnappings since 2008, of which $66 million [€49m] was paid just last year. […] These payments were made almost exclusively by European governments, who funneled the money through a network of proxies, sometimes masking it as development aid.

France was both the most targeted and highest paying country in the past five years, allegedly handing over $58.1m (€43.4m) to Al Qaeda in the Islamic Maghreb through state-funded companies such as nuclear group Areva in exchange for ten hostages (both Areva and the French government deny paying ransoms).

The report claims Austria, Germany, Italy and Switzerland also paid ransoms (all deny doing so), as did Finland and Spain. Qatar and Oman allegedly paid $20.4 (€15.2m) on behalf of European governments to secure the release of Finnish, Austrian and Swiss nationals held in Yemen.

In contrast, writes the paper, the United States and Britain refuse to pay ransoms, and accordingly, “while dozens of Europeans have been released unharmed, few American or British nationals have gotten out alive.” The brother of Edwin Dyer, a British man killed by his captors in Mali, told the paper “a UK passport is essentially a death certificate” for anyone caught by Al Qaeda.

The network’s kidnapping activities have evolved in sophistication over the past decade, with affiliates in northern Africa, Yemen and Somalia following a common protocol coordinated from Pakistan and reducing risk to their members by “outsourc[ing] the seizing of hostages to criminal groups who work on commission.” The practice has become incredibly lucrative —

While in 2003 the kidnappers received around $200,000 [€149,000] per hostage, now they are netting up to $10 million [€7.5m], money that the second in command of Al Qaeda’s central leadership recently described as accounting for as much as half of his operating revenue.

For a number of senior diplomats interviewed for the story, the dilemma presented by an Al Qaeda hostage situation forces governments to make —

an agonizing calculation: Accede to the terrorists’ demand, or allow innocent people to be killed, often in a gruesome, public way? Yet the fact that Europe and its intermediaries continue to pay has set off a vicious cycle.