Report Kosovo
Mitrovica (Kosovo) during celebrations for the third anniversary of the declaration of independence of the former Serbian province, February 17, 2011 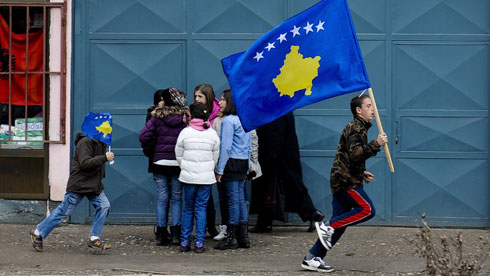 Europe and the challenge of state-building

On February 17, Kosovo will celebrate five years of independence. However, corruption among local political elites has yet to be eradicated at a time when the mandate for the European civil mission to the the former Serbian province has less than 18 months left to run. Questions are now are being asked about the reality of the rule of law in Pristina.

Mitrovica (Kosovo) during celebrations for the third anniversary of the declaration of independence of the former Serbian province, February 17, 2011

Who remembers Kosovo? The war in 1999, when NATO bombarded Serbia. The deployment of the international force, KFOR, and the establishment of a protectorate under the auspices of the UN. Then, on February 17, 2008, the proclamation of an independent state that has since been recognised by close to 100 countries, which was soon followed by the EU taking over the role left by the UN, and the creation of the biggest civil mission in the history of Europe, EULEX. In September 2012, international supervision came to an end.

Summarised like this, it appears to be a linear story of emancipation. But a close look at its details should lead us to qualify this impression. When you turn over the new Code of Criminal Procedure, you find the logo of the US Department of State.

As we have seen in Afghanistan and Iraq: sustaining peace is much more difficult than winning a war. In Kosovo too, the question of nation building along with its cost (more than €600m in five years for the European Rule of Law Mission in Kosovo EULEX) and its methods are so many burning issues.

What is the price to be paid for sorely needed stability and peace, in the wake of the bloody wars of the 1990s? On this issue, suspicions have continued to grow that the EU may have chosen to look the other way in the fight against corruption and major crime.

The priority is the dialogue between Kosovo and Serbia, which began in 2011. "Everyone, from member states to local authorities, appears to be disappointed by EULEX,” acknowledges Slovenian Samuel Zbogar, the EU’s special representative in Pristina. “But it would be wrong to believe that bringing in judges and police is enough to bring about overnight change. You have to have time."

With the passing years, the debate has grown more vocal. In the autumn of 2012, the European Court of Auditors published a report criticising the results obtained by EULEX. It came in the wake of remarks made by German Defence Minister Thomas de Maizière, who broke a diplomatic taboo, when he said that the mission in Kosovo needed "a new start, a new name, a new structure, and new people." Berlin is annoyed by the extended need for the presence in Kosovo of NATO’s 5,500-stong KFOR force, a quarter of which is composed of German troops.

The primary difficulty faced by EULEX is the fact that it is politically weak: it has been deployed to help a state that is not recognised by five members of the EU. The second difficulty is territorial. The mission is unable to work effectively in municipalities in northern Kosovo, which are populated by Serbians. Official EULEX cars are not always able to get through roadblocks. Witnesses are intimidated or hostile to the mission. Overlapping administrations have created chaos. And how can the law be respected if no one knows which law to apply?

Finally, there are the specific issues associated with state-building. EULEX expatriates, who are well-paid (an average of €8,000 per month), answer more to their respective governments than they do to the hierarchy within the force. Their tours of duty in Kosovo are too short — one or two years – for them to master local issues and mentalities, even if many of them have already worked for UNMIK, the United Nations mission in Kosovo.

Their Kosovar colleagues are not yet ready to take over their responsibilities. Close to 80 per cent of them were trained under the former Yugoslav regime, and then remained inactive for years. Following a 25 per cent reduction in the numbers of its staff in 2012, the idea of reforming EULEX has now been tabled. The end of the mission has been scheduled for June 2014, however, it is unlikely to take place as planned. The Kosovar justice system has neither the freedom, the means or the necessary competency to take sole charge of sensitive investigations.

Two processes are ongoing in Kosovo. The first of these, under the auspices of EULEX, aims to establish the rule of law — an initiative that will require decades of effort. The second is the normalisation, with support from Brussels, of relations between Belgrade and Pristina, which will one day bring both countries into the EU. And these two processes are irreconcilable. The evidence of corruption and major criminal activity among the Kosovar political elite hidden in the EULEX and Western secret service files is overwhelming. And it is this political elite centred on the prime minister, Hashim Thaci, that is supposed to take charge of the normalisation relations. Given this state of affairs, it is very hard not to draw parallels with the situation of President Karzai and his clan in Afghanistan.

"Local judges are under pressure from politicians, but EULEX is under pressure from Brussels," explains Shpend Kursani, a Kosovar researcher working for the KIPRED Institute and the author of a report on the European mission. "If stability and the objective of dialogue are endangered by investigations, the office of Baroness Ashton [the EU’s High Representative for Foreign Affairs] would say something." In the absence of better options, Hashim Thaci is the man backed by the West.

All the more so because there is a lack of political personnel. After the war, the higher echelons of the Kosovo Liberation Army (UCK), who were still young, took power. The rule of law and the well-being of the population have remained abstractions.

"Only the small fish go to prison, not the sharks,” insists Albin Kurti, leader of the nationalist movement Vetëvendosje. He wants European teachers and doctors instead of judges and policemen brought to the country. NGO leader, Avni Zogiani shares his doubts about the motives of EULEX. "We gave them files of evidence,” says the director of COHU, an anti-corruption watchdog. They conducted investigations, but there were no charges. EULEX has decided to grant impunity to members of the elite who demonstrate their obedience."

No talks, no membership

The settlement of disputes between Belgrade and Pristina is “a prerequisite for getting a date for Serbia to start accession negotiations with the EU, and for negotiations on a stabilisation and association agreement between the EU and Kosovo," reports Danas in Belgrade.

Talks between the leaders of the two countries, which began last October under the auspices of the EU, are to resume on February 19 in Brussels, where Serbian Prime Minister Ivica Dačić is to meet his counterpart Hashim Thaci of Kosovo in the presence of the EU High Commissioner for Foreign Affairs, Catherine Ashton. At the centre of discussions, explains Danas in Belgrade, lies “the issue of northern Kosovo, predominantly inhabited by Serbs who do not recognise Kosovo's institutions.”