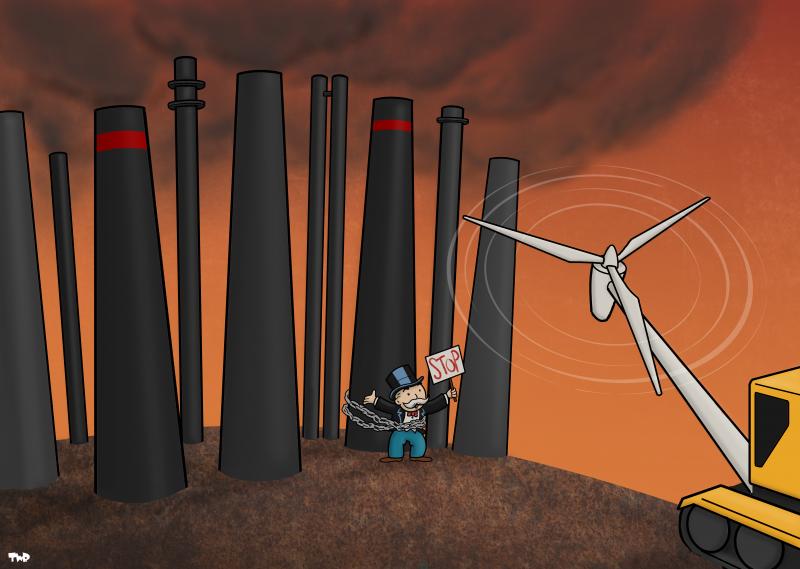 Fighting climate change while keeping economic promises – it is proving to be a difficult balancing act. Within its “just transition” policy, the EU has multiplied initiatives, funding and innovations in order to achieve its environmental goals without harming the most vulnerable. But these good intentions are clashing with the economic reality of industries and jobs that are ill-equipped for change.

August 2018. Each Saturday, men and women dressed in yellow vests gather at intersections across France to protest the rise in carbon tax. This tax has been in place since 2014 to encourage consumers of fossil fuel (diesel, fuel oil and gas) to change their polluting habits. In Paris, a stone’s throw from the Élysée, the anger among the protesters is growing.

Having been caught completely off-guard by the gilets jaunes movement, Europe realised it was time to focus on reconciling “the end of the world and the end of the month”. In other words, how can climate change be addressed without hurting the most disadvantaged?

The disruption will be severe in Italy and countries in central and western Europe, where a large part of the EU’s car production takes place. To help the transition, the EU has created the Just Transition Mechanism (JTM). This fund, endowed with €17.5 billion over 7 years, will finance job-search assistance and retraining programmes for the workers most affected by the transition. However, trade-unionist Ludovic Voet considers the JTM, which was hard-won by trade unions, to be inadequate: “There are many sectors to transform and many investments to be made to create quality jobs with decent salaries. By comparison, Germany has put 40 billion on the table just to get rid of coal.” Furthermore, and going beyond the financial support, he believes the required skills for the new green jobs are poorly described and that the impact on the affected regions has been underestimated.

“With the closure of lignite mines in Maritsa, Bulgaria, 12,000 jobs are now at stake, thereby impacting 120,000 people in the region”, Voet continues. To soften the blow, policies must be extended to the whole area. In Ireland, which has been allocated €84 million through the Just Transition Fund, a bridging programme is being run in its peat-dependent Midlands region. The programme includes policies on energy efficiency, bog rehabilitation and a fund to train workers and support businesses and communities.“In this scarcely populated region, it was necessary to relocate the workers and their families,” explains Jorge Cabrita from the European Foundation for the Improvement of Living and Working Conditions. “A group of local authorities, trade unions, NGOs and experts was created to accompany the transition and identify the needs of workers and businesses.”

For this researcher, wide-ranging consultation is the key to a just transition. However, there is a lack of funds at EU level. Another European innovation can attest to this: the Social Climate Fund. Still under negotiation between the EU Parliament  Council, this fund faims to support the energy transition in the construction industry and in mobility among poorer Europeans. But it will only compensate for - and receive its funding from - another innovation that will itself weigh on low-income households: the new carbon market (ETS2).

ETS2, also still under negotiation in Brussels, follows the first carbon market (ETS1). This was intended for industries and electricity providers, and allowed businesses to trade CO2 emission quotas if they exceed a certain limit, thereby setting the price of CO2 per tonne through supply and demand. Within the framework of ETS2, a carbon price will have to be set in this way for road transport and space heating, which translates into a new burden for households.

“This carbon market was driven by frugal member states such as Germany, the Scandinavian countries and the Netherlands, which are in a market logic of environmental transition”, explains Camille Défard from the Jacques Delors Institute. She continues: “In the face of these member states, eastern and southern countries are defending the Social Climate Fund as a system of European solidarity.”

In France, the new carbon market might replace - or be added to - the carbon tax. This would cause a steep rise in electricity bills, even if current subsidies related to the energy price crisis cancel out the carbon tax. Either way, the Social Climate Fund will struggle to soften the blow.

Camille Défard says: “This fund will only be financed by a quarter of the ETS2 revenue, which is insufficient to compensate for all the vulnerable households impacted by the new carbon price. Green investments are necessary to move away from fossil fuels and to allow for a structural change of the system. The fund is therefore completely undersized in relation to the stakes at play”.

She believes the member states are short-sighted. In Germany, the €9 ticket, put in place for three months for all regional trains and public transport, was certainly a success. But what about long-term investments in an understaffed German railway system in need of maintenance?

In Europe, social justice is a long-term priority - one that will need to be accommodated by the climate transition.