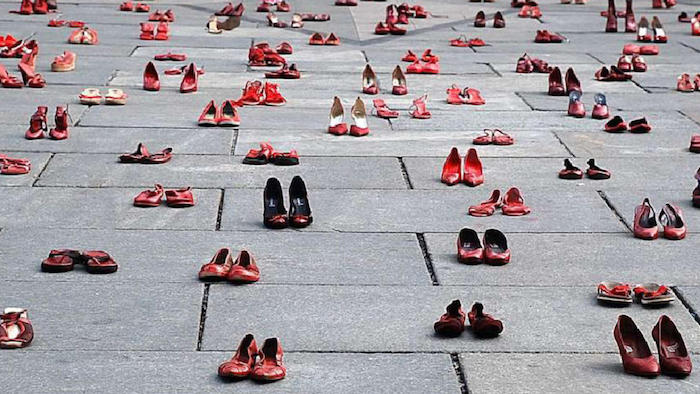 Europe is no exception

Despite new laws and rules, femicide cases are still alarmingly high all around the world, included in Europe.

43,600: the number of women and girls in the world killed by a partner, ex-partner, or family member in 2012. A third of all women claim to have suffered some form of violence, sexual or otherwise, at least once. Only 11 percent of victims reported the incident to the authorities. These figures come from Combating violence against women, published by the Organisation for Security and Co-operation in Europe (OSCE) in November 2016. The data is frightening: the figures, comparable to data on the Syrian conflict – 40,000 dead in the first 20 months of war – reflect a problem that concerns the whole world.

The countries with most cases of femicide are spread far and wide. In Russia, El Salvador and South Africa the rate of femicide is more than 6 cases for every 100,000 women. In Honduras, it is 15 cases per 100,000 women. In western European countries the average rate is 0.4 victims of femicide for every 100,000 women annually. For a woman who lives in Honduras, then, the risk of being a victim of femicide, perpetrated by a partner or family member, is 40 times greater than that for a woman in western Europe. But this doesn’t mean that the data on Europe is in any way reassuring.

Femicide in Europe in figures

Excluding countries for which there is no available data, the map below shows the absolute figures for femicide in Europe in 2015 for the countries that make the data available through Eurostat. Italy, Germany, and the United Kingdom have the highest numbers of cases. Click on a country to visualise detailed figures.

National phenomena can be seen more precisely when considered in relation to population (the number of femicides in proportion to the total female population). The graphic below shows the countries with the highest rates of femicide, and includes only the countries mapped by Eurostat. The worst situations are found in Montenegro, Latvia, Lithuania and the Czech Republic. Hungary, Bosnia and Croatia also have higher numbers than the European average.

A final point that emerges from the data available on cases of homicide throughout Europe sheds light on an divergent trends for the two sexes: while male victims of homicide have been in sharp decline in recent years, the number of women murdered in Europe, not necessarily at the hands of a partner or family member, remains constant, with a slight increase from 2013 to 2015.

Unfortunately, the availability of relevant data remains rather limited: data made available by Eurostat and redrafted by EIGE (the European institute for gender equality, which currently has its seat in Lithuania), covers only 20 countries, among which are 15 member states, 4 candidate countries from the Balkans (Albania, Bosnia, Macedonia, Montenegro), and Switzerland. There are therefore 13 member states with no accessible statistics on femicide.

Strong discrepancies persist in the way in which the data is collected: to categorize a case as femicide, the sex of the victim and their relationship with the perpetrator are taken into account. This assessment is done by the police, but, according to a recent report published by EIGE, police in Denmark, Greece, Luxembourg, Lithuania, Malta and Poland don’t collect such information for homicide cases. France and the United Kingdom, in contrast, provide the most detailed data, reporting the motives, weapons used, and the general circumstances of the act.

But what are the judicial instruments for combating femicide? The first steps on the issue were taken in 1979, with the UN convention on the Elimination of all Forms of Discrimination Against Women (CEDAW). That was followed by the adoption in 1995 of the Beijing Platform for Action. 16 years later, there is the Istanbul Convention on preventing and combating violence against women and domestic violence, approved by the European Council in 2011. So far, 14 European countries have signed, and the European Union is about to do so: the Parliament expressed its positive outlook in September 2017, while voicing reservations on the limitations placed on judicial cooperation in penal matters in cases of gendered violence. Now the decision is in the hands of the Council of The European Union.

The strategies recommended to the signatories of the Istanbul Convention often mention the “three p’s”: Prevention (and therefore education), Protection (effective response to accusations by victims of gendered violence) and Punishment for the perpetrators of such crimes. We could perhaps add Power as a fourth p: that is, Empowering women in combating and eliminating violence against women and domestic violence. In some European countries, including Italy, there is a vigorous debate on this theme. The annual Colloquium on Fundamental Rights, organised by the European Commission and held on the 20th and 21st of November this year in Brussels, had women’s rights as its theme. During the conference, the Commissioner for Justice, Consumers and Gender Equality, Vĕra Jourová, turned attention to the wage gap. “In the European Union, women earn on average 16% less than their male colleagues. This injustice is unacceptable in our society. The wage gap will be eliminated, because economic independence is women’s best weapon against violence”. The Commission is now evaluating a “Plan of Action” to put an end to the wage gap, to be presented before the end of its mandate (2019). One more step towards a more equal society.

What does "femicide" mean

Among the first to use the term was the South African activist Diana Russel, in 1976. Afterwards, the term gradually entered common usage. In feminist criminology it refers to a specific category of crime: the intentional killing of a woman due to her purported transgression of traditionally or socially determined gender roles. The nature of the “transgression” varies according to the social context in which the crime is perpetrated.

How we worked
The data used for the analyses on which this article is based come from Eurostat. The only country not covered by information from Eurostat is Romania, for which the data has been kindly provided by Ecaterina Balica. Do you know of any relevant data for countries not included in this article? You can help us by sending us a tip.