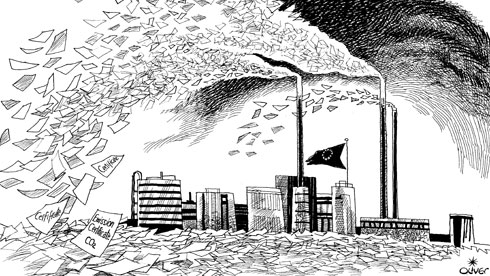 Europe is united in failure

No European country will achieve the EU’s 2020 environmental goals aimed at increasing the production of renewable energy and at lowering CO2 emissions, warns the European Environment Agency. While some argue that the benchmarks were unrealistic, others claim that even limited progress is a step forward.

Granted, we have underperformed. But who in Europe hasn’t? Granted, this is but a slight consolation because it means the continent will have a lot of trouble meeting the EU’s environmental and energy committments (the two, we now know, are related) defined in the famous 20-20-20 protocol. This 2008 agreement stipulates that, by the end of the decade, member states must reduce CO2 emissions by 20 per cent of their 1990 level while simultaneously reducing energy consumption by 20 per cent and increasing the share of renewable sources in the total production mix to 20 per cent.

Europe as a whole will not achieve these goals, neither is any EU country on track to meet the three requirements of the 2008 road map but neither is any country underperforming in all three areas, according to Trends and Projections in Europe 2013 – Tracking progress towards Europe’s climate and energy targets until 2020, a recently published European Environment Agency (EEA) report.
Reducing energy consumption by 20 per cent is the most difficult criteria to meet in all the European countries. Today, according to EEA estimates, out of the 26 countries that signed the agreement (Slovenia and Croatia are not signatories) only four countries – France, Germany, Bulgaria and Denmark – are getting close to the target. In these countries fiscal policy and industrial enticements operated properly.

The agency warns that whatever happens, crisis or no crisis, European primary energy consumption will reach 1.5 billion tonnes of oil equivalent in 2020 thus placing the goal of reducing consumption totally out of reach.

Globally, Europe is approaching the target of reducing CO2 emissions by 20 per cent (the agency indicates a fall of 18 per cent) thanks to the crisis which has slowed economic growth and development. But in this also, each country has followed a different path. [[Half of the states, 14 out of 28, are on course and could perhaps meet the terms of the agreement]]. But Spain, Belgium, Ireland, Luxemburg, Austria, Estonia and even “green” Finland are off track. As for the other countries, they will only succeed, Italy included, if they reinforce existing measures.

In the attempt to achieve 20 per cent of renewable energy in total production, it’s everyone for themselves. The data for the whole of Europe are a little dated: in 2011 renewables accounted for 13 per cent of consumption. This raised hopes that the goal could be achieved in 2020. But here again, everyone is moving at a different pace. France (this will not please those that call, in vain, for nuclear power to be included as an environmentally-sound energy source), but also Belgium, the United Kingdom, the Netherlands, Malta and Latvia remain below the minimum level.

The question is: who is right? Those that, from the onset, said that the climate change plan was both unrealistic and over-ambitious? Or those that argue that any attempt, even unfinished, towards this goal is already a success?