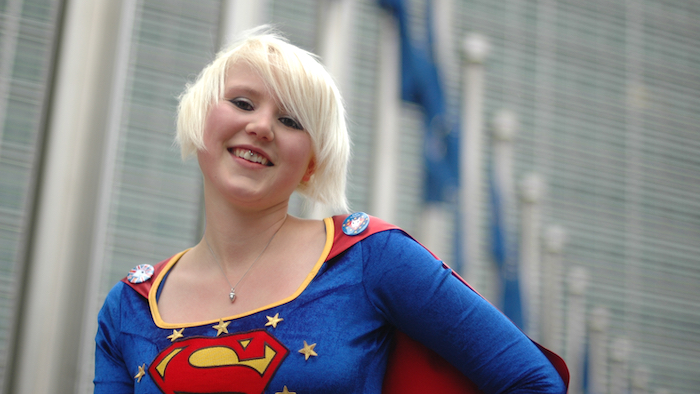 ‘Europe, learn from the Brexit mistake’

With one month to go for the UK leaving the European Union, popular British anti-Brexit activist known as EU Super Girl stresses in this speech she recently held in Brussels the need for Europe to show more inclusiveness, diversity and engagement with citizens if it does not want to fail them.

The EU Super Girl a character I have created, a super hero for the EU who fights against the evils of populism, nationalism and apathy and strives to communicate a positive, pro EU narrative, creating an inspirational vision for the future of Europe, through art, music, literature and performance.

My approach is somewhat unconventional, many are sceptical at first, but desperate times call for drastic measures… and with the UK, currently crippled by Brexit paralysis – these truly are desperate times! But the problem is not just in the UK, the threat of the far-right exists across Europe. The factors which cultivated Brexit; but they are not exclusive to the UK and the EU must examine Brexit carefully and reflect upon what needs to change to prevent a re-occurence in other member states.

The EU also needs to accept a failing on its own part to adequately communicate and engage is citizens. The EU institutions have achieved huge progress for our continent but the truth is, most people do not realise how imperative membership of the EU is to their quality of life. So we must ask ourselves: What have we been doing wrong? And what can we do differently to alter the public perception of the EU for the future?

So what can we learn from Brexit? What I realised very rapidly was that for most people, regardless of whether they voted Remain or Leave, they made a decision based on an emotional not a rational argument. And when people make decisions based on emotions; it is very hard to make them change their mind because they will not listen to the facts. So you have to change your approach and fight fire with fire. So we must challenge one identity, with another. I created the EU Super Girl, an aspirational figure, especially targeting the youth. Bold, bright costumes and instantly recognisable iconography are all part of a strategy to grab attention and engage the apathetic.

In contrast, people feel alienated by Brussels; the architecture is intimidating, the comms are too corporate, the language too technical, the attitude elite. Europe’s citizens don’t feel part of this culture or able to engage with the democratic process and this is why voter turnout is so low. It is imperative that the EU alters its methods of communication and participation to become more inclusive, more diverse, more engaging… Citizens need to feel like they a part of a welcoming community where their voice matters, and not dictated to by external institutions and the political elite. Good efforts are being made on social media to increased youth participation in the EU elections in May 2019 – but much more needs to be done.

I am currently preoccupied with fighting Brexit, but I intend to divert my attention the European Parliamentary elections to campaign to encourage young people to vote for pro EU parties. Because if they do not make the effort to stand up for Europe – then they are handing power over to the populists. The approach does not have to be serious and technical to be meaningful, in fact, using humour, creativity and passion can often generate a bigger impact. Social media is a fantastic tool for reaching people; content that is creative, fun, entertaining and memorable will engage people’s attention.

We need to bring the conversation in the Brussels bubble down to a local and personal level, we need to give voice to real, human stories of love, work, study and travel facilitated by the EU and highlighting where regional funding projects benefits the local communities. Print and broadcast media, can be exploited through publicity stunts; Events, activities and exhibitions in local areas where citizens are invited to participate will help engage them in the democratic debate. We must make citizens feel empowered and valued so that they in turn will value the achievements of the EU: Unity in our diversity, solidarity across nations, tolerance of each other’s differences and above all of peace.

Brexit is a stumbling block in achieving our European dream, a backward step for the UK, it is distraction from combatting the real issues; Education, Health-care, Criminal justice, jobs and opportunities, achieving equality, combatting Climate Change. If Brexit goes ahead, I can assure you, it will not be long before we rejoin the EU. In the meantime, Europe should not be deterred from achieving progress, please learn from our mistake. I will continue to fight for Europe, because the future is Europe and we are stronger when we work together.

How you can support EU Super Girl

For the past two years Madeleina Kay has been campaigning tirelessly for the U.K. to remain in the EU. Using her distinctive style of music, art and writing to convey the basic point of the argument - The U.K. is simply better off in the EU. Madeleina is a champion of the younger generation that will be most affected should Brexit go ahead.

Having postponed her degree at Sheffield University, to concentrate on fighting full time to reverse Brexit, Madeleina kept up a full diary of interviews, performances, presentations and creative campaigning. That takes some organising and commitment and means that she has not been able to earn any money since she started campaigning. She allows her art work to be freely used by the Remain campaign, and produces graphics for campaigning literature for local groups. Her campaign projects (Letters2Europe , StopBrexitBeermats , #24ReasonstoRemain ) are 100 percent crowdfunded and she has received no external funding. Her illustrated books, like Go Back To Where You Came From (which raised £1,800 for a refugee charity and which Madeleina uses to give talks about refugees in Primary schools) and Alba White Wolf's Adventures in Europe (A sequel which promotes European culture and history), are also crowdfunded and self-published.

Despite the difficulties she has faced she has kept up an impressive number of media appearances and has been especially successful at achieving European media coverage. Madeleina has also travelled around the UK and Europe to participate in events, to campaign to stop Brexit and promote the pro-European narrative. In 2018 she visited; Belfast, Berlin (twice), Brussels (more times than she can remember), Dijon, Dublin (three times), Frankfurt, Gdansk, Nice, Strasbourg (three times), Vienna and Warsaw. On many of these trips she has interviewed local people to discuss Brexit and produced videos for social media. Madeleina was also a lead organiser of the Bollocks to Brexit bus tour and created a series of vlogs from it.

This level of engagement doesn’t come for free and Madeleina’s costs for travel, overnight accommodation, art materials, musical gear, recording studios and general living expenses have grown to a point at which the friends and relatives who have been supporting her thus far need to ask for help.

You can do so by making a donation on Madeleina's page on Gofundme.