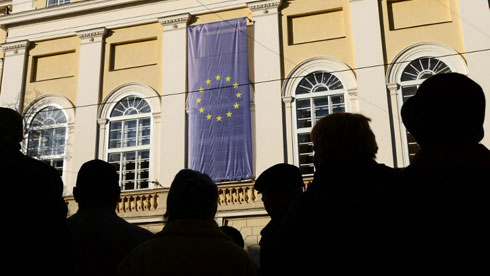 ‘Europe loses the battle for the Ukraine’

By turning down the chance on November 21 to sign the association agreement proposed by the EU at next week’s Eastern Partnership Summit in Vilnius, Kiev is turning its back on Europe and succumbing to the political and economic pressure of Russia, believes the European press.

By its rejection on the same day of all the new government laws that would have allowed imprisoned opposition leader Yulia Tymoshenko to be transferred abroad for medical treatment, the Ukrainian Parliament has also rejected the principal condition laid down by the union for the signing of the agreement.

“Viktor Yanukovych at the end of a dream,” headlines the Ukrayinska Pravda news website in the wake of the Ukranian government’s decision not to sign the association agreement with the European Union, one week before the Vilnius Summit (November 28-29), which was due to be devoted to the EU’s Eastern Partnership plan. For this opposition newspaper, Ukrainian president Viktor Yanukovych has put an end to the whole country’s ”dream” by ”haggling and bluffing too much” –

It was not only the foreign media that got carried away about the association agreement, but the Ukrainians themselves. We talked about it everywhere: in the markets, on public transport, and even in night clubs.

In flipping over the table on which the association agreement was to be signed, the Ukrainian government has confirmed the opinion of those European politicians who claimed that Yanukovych is leading Europe on merry dance, and was really simply trying to get the best deal from Russia. And nobody serious will now sit down to talk about cooperation with such a politician again. The Ukrainian president has taken the country dangerously close to politicians like [Belarussian president] Alexander Lukashenko, and to countries ruled after the Belarusian fashion. But hope dies last. During a visit to Austria, Yanukovych declared that Ukraine will not swerve from the EU course. […] So all is not yet lost? And today we’ll see yet another twist in the plot? Who knows? In the past 20 years developments in Ukraine have revealed bigger surprises.

“Kiev steps back from the Union”, writes SME in Slovakia. The Bratislava daily notes that the U-turn in relations between the union and Ukraine is an important lesson for European diplomats, who are often distinguished by their “unfounded optimism” and failure to grasp who they are negotiating with. While Kiev’s decision poses a major problem for Europe, it will have still more detrimental consequences for the Ukrainians, SME continues –

The choice between Brussels and Moscow is not only a question of short-term economic benefits […] but also a choice between a more democratic state with a better functioning legal system on the one hand and a gangster state and increasingly deep poverty on the other. Yanukovych has gone for choice number two. While he and his relatives will profit from it, most Ukrainians will pay dearly.

“Having miserably lost its match against France, has Ukraine lost Europe? It seems so, rather dreadfully,” writes Le Soir in Brussels, in an allusion to Ukraine’s elimination from the qualifying rounds for the 2014 football World Cup. For the Belgian daily, the Eastern Partnership, which was meant to bring the EU closer to the former Soviet republics, is ”in a state of clinical death”, and Russian pressures have played their part.

The Lithuanians, who have the working presidency of the EU until the end of the year, had been hoping to crown their half-year on the job with a success in Vilnius are seeing their dream come crashing down. […] The powerful arguments presented by Moscow’s hard cash have carried the day.

On the same wavelength, Frankfurter Allgemeine Zeitung writes of a genuine “tug of war” between the EU and Russia. According to the newspaper, this decision, coming one year after the negotiations on the association agreement began, has come “much too late”.

Through threats, trade blockades and excessive customs controls, the message has got through to the government in Kiev that Russia has what it takes to push the country, which is already struggling with numerous problems, into bankruptcy if it were to sign the agreement with the European Union.

“Europe loses the battle for the Ukraine” concludes the Austrian daily Die Presse on its front page, sharing the total amazement in Brussels where the talk was still of a “dynamic situation” at noon on November 21, before EU officials refrained from all further comment in the afternoon. It is, however, the U-turn that surprises Die Presse most of all –

Priority will now be given to participating in the competing project, a customs union instigated by Moscow, which [president Viktor] Yanukovych had originally distanced himself from.

Finally, in Tallinn Eesti Päevaleht worries that the EU will no longer be able to assist Ukraine, now that Kiev has fallen in on the side of Russia.

Yesterday’s events have shown that President Viktor Yanukovych lacked the strength to take a decisive step. The Russian pressure on the one hand and the conditions imposed by the EU on the other hand proved to be a complicated bind. […] This reversal, in which Kiev has broken off its friendly relations with Europe, seems to be leading to a situation in which the Ukraine can no longer hope for any further help from the West if pressure is brought to bear by Moscow.