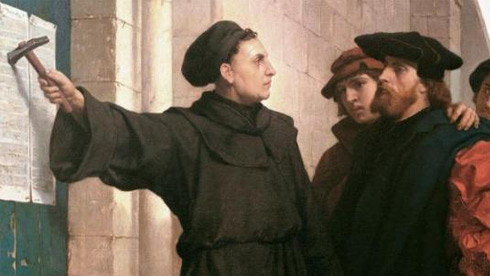 The EU is becoming a corrupt church where Germany rules by a dogmatic economic orthodoxy. Politics must take back control with a protestant schism coming from grassroots initiatives, argues an Italian columnist.

It can only happen in this Europe, which is veering towards disaster not because of its economic woes but the contorted foolishness of its politics. We’re referring to the scandal of a German constitutional court that has become crucial for every EU citizen, while the constitutional court in Portugal is worthless. We’re talking about Jens Weidmann, the governor of the German Central Bank, who is accusing [the president of the European Central Bank (ECB) Mario] Draghi of going beyond his mandate – saving the euro with the means at his disposal – and is shamelessly declaring war on a currency that we call “common” precisely because it does not just belong to Berlin.

The ECB’s mandate is in fact clear even if Weidmann contests its constitutionality. It aims to maintain stable prices (Article 127 of the Lisbon Treaty) but while respecting Article 3, which prescribes sustainable development for Europe, full employment and improvement in the quality of the environment, the fight against social exclusion, justice and social protection, economic, social and territorial cohesion and solidarity between EU member states.

Something is not right if Article 3 does not even poke its head out from the pages of the ECB’s website for fear that Berlin might take a dim view of it.

In little over a year, in May 2014, we will vote for a new European Parliament. It will be a date that is unusual for Italians in particular. That is because the European troika (ECB, European Commission, International Monetary Fund) has a bigger impact on our lives than ever was the case in the past. It is because its anti-crisis medicines are being challenged everywhere by people, even shaking the confidence of the doctor that is applying them with the greatest passion. On September 22, the Germans will go to the ballot box and may reward an anti-European party – Alternative for Germany – that came into being last February. The parties will need to put a stop to the lies that are being put about as to the possibility of making Angela Merkel “yield”. Especially in Italy, they will need to stop the betrayal of voters and citizens. Finally and for the first time, if they dare, they will be able to name a president of the European Commission. That is in the treaties.

The reason we talk of lies is that no government is in a position to bend Berlin to its will with exclusively economic arguments that have been peddled up until now: a bit less austerity, a bit of growth, some amnesty. Convinced as it is that it is up to the markets and nothing else to discipline us, Berlin will make a move only if politics prevails over economic arguments that have degenerated into dogmas. Governments, parties and citizens will stake out clear visions on what another Europe must look like: not the current one with its minimal resources and rushing into 18th Century power struggles.

The EU today looks like a corrupt church, needing a protestant schism: a reform of its credo and its vocabulary. It needs a plan with specific points (Martin Luther had 95 theses). The economic papacy is being subverted and political faith is taking precedence. Only in this way will a dominant religion break through and Berlin will have to choose: either a German Europe or a European Germany or hegemony or parity between EU member states. It has always had to choose such this path: Europe, as Adenauer said in 1958, “must not be left to the economists”.

German orthodoxy goes back a long way, secured its position in the post-war period and is called “ordoliberalism”. The markets are perfectly able to correct imbalances without the intervention of the state because they have unchanged rationality. This is the ideology of the “ordered house”, ie that every nation is to make amends for its own faults (the German word Schuld means debt and fault). Solidarity and international cooperation come afterwards, rewarding the homework that has been done if it is has been done well. As in England, the word democracy is invoked misleadingly: transferring part of one’s own sovereignty creates a vacuum in national parliaments. For that reason, the German constitutional court is invited to give its view on any European move.

It is misleading because not all democracies are equal in the European “factory”. There are some that are sacrosanct and some that are doomed. On April 5, the Portuguese constitutional court rejected four austerity measures imposed by the troika (cuts to state stipends and pensions) because they were contrary to the principle of equality. The communication sent out by the European Commission two days later, on April 7, ignored the judgement completely, expressed its happiness that Lisbon was continuing with the agreed treatment and refused any renegotiation. “It is essential that the key political institutions in Portugal remain united in continuing” to clean up financial affairs. The different treatment given to German and Portuguese constitutional judges is so dishonest that Europe will find it hard to survive as an ideal among its citizens.

Some say that it can survive if German hegemony, whilst remaining a hegemony, becomes more benevolent. George Soros asked for that in September 2012 in the New York Review of Books, with solid arguments. The Polish government is demanding it. In Germany, those who fear not just hegemony but a rather introvert and shabby self-idolatry, are calling for it.

If Germany wanted a supranational Europe, up to the point of inserting it in its constitution, it is because the ordoliberals (in the Central Bank and academic circles) have been repeatedly unseated. Adenauer imposed the EEC and the Franco-German pact on a minister of the economy – Ludwig Erhard – who did everything to bury them and who accused the EEC of “protectionist navel-gazing” and “economic foolishness”.

With London, he tried to sabotage the Treaties of Rome, preferring an area of free trade by far. Neither Adenauer nor the first head of the European Commission, Hallstein, listened to him. Thanks to them political reason won the day. The same scenario re-emerged with the euro. Here too, clinging on to Paris, Kohl put politics first, going over the head of the mainstream economists and the central bank. Today we are at a similar crossroads but with chameleon-like politicians who do not have any firm will. The crisis has disillusioned the German people. Ordoliberalism is becoming politicised and smacks of old vendettas.

All that is left then is a schism: the construction of another Europe, which starts from the bottom up rather than from governments.There already is a project, written down by the economist Alfonso Iozzo: according to federalists, it can become a “European citizen’s initiative” (Article 11 of the Lisbon Treaty) to be presented to the Commission. The idea is to equip the EU with enough resources to create growth in place of the state, which is constrained by austerity. The growth would be not only less expensive, as it would be done together, but socially fairer and more environmentally conscious because it would be fuelled by a tax on financial transactions, a carbon tax (carbon dioxide) and by a European VAT. The first two taxes alone would generate €80-90bn. The common budget would respect the threshold of 1.27 agreed in its time. Mobilising the European Investment Bank and Eurobonds, we would have €300-500bn and 20m new jobs in the economy of the future.

To do these things, however, politics would need to turned upside down and become once again, as the economist Jean-Paul Fitoussi said, not a collection of automatic rules but a choice. There is a need for a Luther-style self-subversion, such as which occurred when he wrote his 95 theses and reportedly said: “Here I stand. I can do no other. May God help me, amen.”