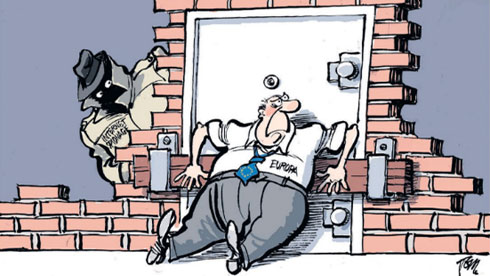 In response to NSA eavesdropping and the massive collection of user data by internet giants, it is up to the EU to lay the foundations for the future worldwide web. Because only Europe can guarantee a “responsible, shared” environment in which individuals can manage the data that concerns them, points out a French philosopher.

The tracing of communications, internet browsing, and online purchases, is the major source of American intelligence, and more broadly, that of most of the major world powers. Tracking the vast volumes now referred to as Big Data is a movement undergoing an indefinite intensification, correlated to the ever-increasing curve of sales of mobile phones, smartphones, computers, and tablets, as well as interconnected protocols promoting exponential generation of the data.
What the successive revelations of the Prism affair are bringing to light is not so much the fact that America’s National Security Agency has been eavesdropping on data from all sides; we’ve known that since at least the exposure of the Echelon network at the end of the 1980s. No, the true revelation is the vast scale of the data collections amassed through measures and arrangements that not only often defy the law, but somehow exceed our ability to comprehend them.

A somewhat motley self-awareness regarding these practices has manifested itself in various forms by citizens and associations without encountering an echo to match the gravity of what is at stake. But we can today assert that the information revealed by Edward Snowden and passed on by Glenn Greenwald marks a decisive turning point: that of an awakening of a global consciousness that has decided actively to tackle the urgent need to regulate the practices of harvesting, preserving and using personal data.

The first clear sign of that, in the wake of these revelations, is the desire expressed by Brazil, on the initiative of its President Dilma Rousseff and in association with emerging countries and other members of the BRICS, to change the rules governing the internet, which have been so clearly under American sway. And the bid to wrest control of the net is a project that should spark heated geopolitical struggles in the coming months.

However, it is not claimed that an internet that would involve China, Russia, or other countries more or less hostile to liberty in rules of procedure with a multipolar appearance would result in more transparency; on the contrary, given a little time one could safely bet on an opposite effect. In this regard, it is becoming clear that Russia's granting of asylum to Edward Snowden is part of an initiative to openly signal a new balance of power in the complex geopolitics of the internet and data, rather than a equitable effort to rein in the practices of the intelligence agencies.

[[In my opinion, it now falls to the European Union to play an instrumental role in the governance of the internet]] and the issues relating to personal data that have arisen. The project defined in Lisbon in 2000 to make Europe the “premier power in the knowledge economy” has run aground for many reasons, but it may now be up to our old Europe to build the future basis of a “Web 3.0”, a Europe capable of offering a "responsible and shared digital environment" founded on the ability of all to manage the information that may be collected – and to manage how it will be used.

It is now up to Europe to lay down the boundaries, not out of any disillusioned reaction springing from its technological backwardness, but in the name of its “democratic maturity”. Boundaries that would require consent clauses put to the users will be limited to a reduced number of chapters and features, so that the agreement will have been reached in full knowledge of what is behind it – informed consent. The regulations would also encourage the spread of the practice of opting-in, at the expense of opting-out – that is, no longer putting up with options imposed by default, but rather ticking them off voluntarily, particularly those relating to the resale of data to third parties.

Finally, it falls to Europe to bring in public policies intended to support “ethical innovation”, and to encourage the development of new industrial models that are not keen to monetise endlessly the storage of where our clicks take us to on the internet.

Open data, or the availability of public data called up to be exploited for an infinite number of services, must be able to represent the active laboratory of a European digital economy built on three foundations: on strict adherence to the law, on the involvement of the responsible public authority, and on free enterprise that respects the tamper-proof integrity of the individual.

Apart from this perspective opening up new economic horizons, it is moreover likely to be repeated in other places, so as to contribute to the founding of an alternative “global ecology” that is as conscious of the adverse effects and stifling atmosphere induced by excess as it is of potentially fruitful virtues that may emerge from the reality of an ecosystem revitalised by a shared ethic.

In France, when it was revealed that the NSA had recorded 70 million telephone conversations between French citizens. President Hollande summoned the US ambassador, and less than 24 hours later, was on the phone to Obama. the French Minister of Foreign Affairs described the practice of spying on citizens as “totally unacceptable among allies," while the Minister of the Interior called it “shocking”. In Germany, [however], when she learned that her country was major target for spying in Europe, Angela Merkel opted to wait and see and downplayed the news. The Interior Minister traveled to Washington and announced on his return that everything was fine. An NSA assistant had told him so [...]. And finally the eavesdropping scandal was laid to rest, just in time: right before the elections.