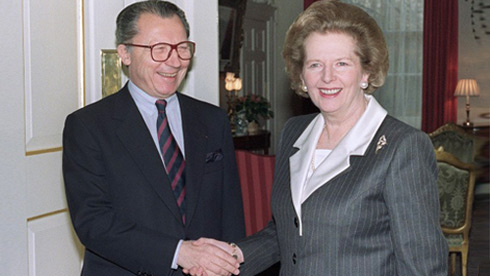 Her troubled relationship with the EU wrote the Iron Lady’s political obituary.

Everyone who knew Margaret Thatcher felt at one time or other the bruising force of her handbag. My turn came during her big fight with [then chancellor of the exchequer] Nigel Lawson about the chancellor’s effort to tie the value of sterling to the Deutschmark. Surely, I had needled her, she would bend eventually to Treasury pressure to take the pound into the European exchange rate mechanism?

The year was 1989 and the occasion a drinks party hosted by political journalists at Westminster. In response to my act of lèse-majesté, Thatcher took hold (quite literally) of the lapels of my jacket: “Mr Stephens! You don’t understand! I won’t have the Belgians decide the value of the pound!” If I wanted to write about the government’s economic policy, she continued, I should pay less heed to what I was being told by the Treasury.

The conversation was off the record, but, even stripped of identifying marks, it made for a good story. Aside from the curious notion that her own chancellor could not be trusted with the economy, her manner conveyed the visceral quality of her hardening antipathy towards Europe. This hostility was first to undo her and then, over time, to become a poisonous bequest to the Tory party. It might yet see Britain depart the EU.

I never knew what she had against the Belgians. She got on with the Dutch. Perhaps Belgium’s crime was to play host to the institutions of the EU. By the late 1980s she was at war with Jacques Delors, the French socialist heading the Brussels-based European Commission. More likely, Belgium, divided between Flemish and French speakers, depended for its survival on the continental consensualism she could not abide.