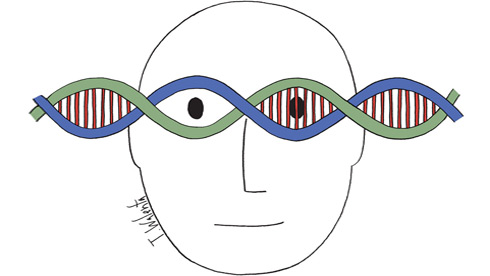 Two American researchers recently completed a study of genes from a sample of 40 populations from the European continent. Their conclusion: all of today's Europeans are descended from the same ancestors. Here's why.

Take two Europeans of today, even a pair living in widely separated countries, for example a Finn and a Frenchman. Following an analysis of the genes of 2,257 people from 40 populations across the continent – Albanian, English, Belgian, Danish, Spanish, Italian, Macedonian, Russian, Turkish, etc – it turns out that this pair shares between two and 12 ancestors who lived between today and 1,500 years ago.

The study, published in Plos Biology, was carried out by two population geneticists, Peter Ralph and Graham Coop of the University of California Davis. On the scale of the last 3,000 years, it reveals, there exists a high degree of relatedness between populations of different European nations, despite the fact that these are recent populations made up of different groups of humans.

Why is there a relationship between time and the length of the DNA segments shared by a pair of individuals? To understand that, we must consider how genes, and therefore the DNA they are made up of, recombine with each generation. The genome of any given individual is formed by mixing the genes of parents, such that some of his DNA comes from his mother and some from his father. In the next generation, the mixture incorporates new segments of DNA, and so on down through the generations. A person’s DNA therefore contains segments of DNA from his ancestors, interspersed with new segments introduced with each generation. As the location where the DNA segments are modified differs each time, the segments of conserved DNA grow ever shorter. Thus, first cousins who have common grandparents share DNA segments longer than those of second cousins, who share segments longer than those of third cousins, and so on.

If a segment inherited from an ancestor is conserved in two individuals down through a large number of generations, the age of this ancestor can be assessed from the length of the segment. This is what Peter Ralph and Graham Coop did. Their calculations show that two Europeans of two neighbouring countries have between two and twelve common "genetic” ancestors who lived over the past 1,500 years, and up to a hundred if the hunt goes back another thousand years.

However, the researchers found that the distribution of the common ancestor is not homogeneous geographically. The Italians, for example, have fewer common genetic ancestors among themselves and with other Europeans, and have more links with ancestry that dates back 2,000 years rather than 1,000. This difference may reflect greater geographic isolation of Italy.

The researchers themselves, however, acknowledge that to study a story as complex as that of Europe in any detail, analysing the genes of our contemporaries is not enough. We will also have to use the DNA of individuals who lived in the past, which will allow us to date the antiquity. And no doubt we shall have to appeal to other disciplines, such as archaeology and paleo-anthropology.